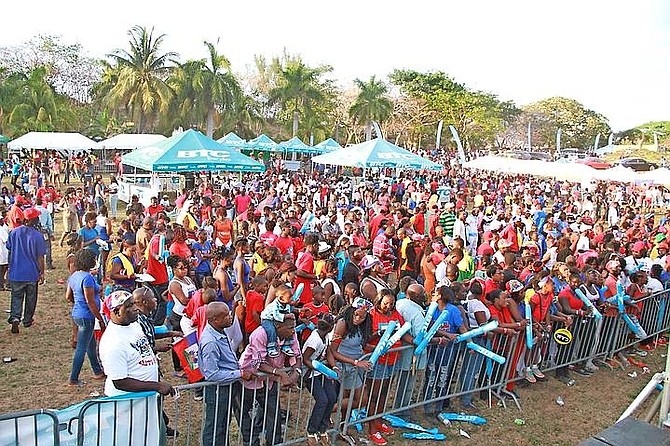 BRANVILLE McCartney yesterday said Prime Minister Perry Christie and Leader of the Opposition Dr Hubert Minnis should be ashamed of themselves for making a “political spectacle” of Haitian Flag Day at the weekend.

The Democratic National Alliance leader told The Tribune it was hypocritical, especially for the Prime Minister Christie, to “parade around the event and give speeches” when thousands of Haitians remain “disadvantaged”. Mr McCartney said it was all a “ploy” because of the upcoming general elections.

Shortly after the Haitian celebration on Saturday at the Botanical Gardens a voice note began circulating on social media with Mr Christie telling the crowd that he “hopes he is alive to see” another Haitian person, after Stephen Dillet, in the House of Assembly.

“I have only come to show my respects and to let you know that a long time ago, there was a man by the name of Stephen Dillet who became the first man of colour to be elected to the House of Assembly and he was from Haiti,” Mr Christie was heard to say at the event.

“They have named the school after him because he served in the House of Assembly for three years and I know sometime soon there will be another Stephen Dillet, I hope I am alive to see it. God bless all of you.”

Mr McCartney said he hopes the Haitian community “sees through” Mr Christie and Dr Minnis and not allow themselves to be “used as pawns”.

“In light of the fact that both of them are voting in favour of equality but their presence there was all political. If they wanted to do anything about equality they would address the needs of persons who are being disadvantaged most,” Mr McCartney said.

“There are still thousands of persons who have a right to apply for citizenship, who are not being being looked at. Many persons fall into that category and because of the circumstances they are in, they are unable to go to college, find a legal job, continue their education and not be able to travel.

“Their life is at a standstill but you have these two men parading around Flag Day and their administrations have done nothing to assist these persons. It was pure politics and they should be damn ashamed of themselves. I hope the Haitian community realises that and be smart and realise it was just politics and remember that those who can vote, do not let the FNM and the PLP use them as pawns.”

Haitian Flag Day honours May 18, 1803, which Haitians regard as an iconic date in their country’s historic struggle for freedom.

The holiday has been celebrated in The Bahamas since 2002, when a group of Bahamians of Haitian descent wanted to “show reverence and show respect to their culture”.

Perry is playing with fire.

There should be NO Haitian Day in The Bahamas .......... these ungrateful illegals should not be allowed to flaunt their alternative identity in our country ......... you either Bahamian or GET THE HELL OUT!!!!!!!!!!

Branville Mccartney is doing the same as he accuses others of doing, playing politicals...The only difference is some know how to play the political game far better than he does.