Mitchell: Smith is waging war against me 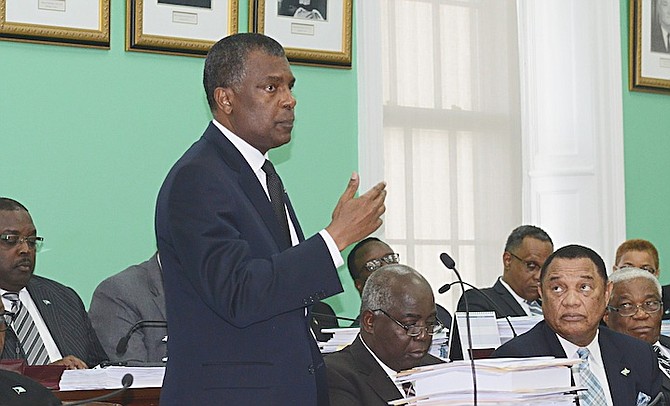 FOX Hill MP Fred Mitchell was adamant yesterday that Fred Smith, QC, legal director of Save The Bays, has waged “war” on him through a series of court actions aimed to “bankrupt” him personally.

Mr Mitchell called the actions now before the court “nonsense” and said he hoped that court officials would see their way clear to deal with actions appropriately.

In the meantime, the Foreign Affairs and Immigration Minister said he will fight the actions lodged against him with all of his being because this was a matter that he did not take lightly.

Mr Mitchell insisted that he does not consider himself bound by any injunction issued by the court as it applies to attempts to stifle what is said in the House.

He spoke on a point of privilege in the House of Assembly after being absent from Parliament for several sessions due to official country business overseas.

“I want to say also that those who for political convenience now find this uncomfortable cannot have their cake and eat it too,” Mr Mitchell said, “you cannot approbate and reprobate at the same time.

“The reason for the privilege are manifold but I say this, those who argued that it was fine to steal the private banking records of customers of the Bank of the Bahamas and thought there was nothing wrong with that because they believed by exposing the private banking affairs of public figures, they were serving a public good, have no legs to stand on in this argument. You remember records of the bank of the Bahamas stolen and produced and printed in the newspaper. Nobody seemed to have any care about people’s privacy in that case it’s the same crews.

“Those who publish stolen cabinet papers because they believed that it serves a greater good also have no leg to stand on.”

He continued: “I assure the public that these documents which are before the House are not purloined or stolen or unauthorised as the progenitors of this foolish court action have sought to say.

“I ask the public to consider this. When the facts reveal that there was in fact a conspiracy to destabilise the government, funded by high net worth individuals, surely by the same reasoning you argue that it was fine to publish stolen material, publishing this material also serves the greater good. There is no question about it.

“The elements are all there. You have a Queen’s Counsel who has been hired and again by the same set of moneyed foreign interests. He himself has urged people to sue the government to bankrupt the government. He has pledged to run  in the Fox Hill constituency funded by who knows and to what end.

“He says in my personal capacity so in the end point if he succeeds with this is to bankrupt me personally. So this is war. This is war.”

Last month, STB was granted an interlocutory injunction restraining the government from further disclosing the group’s confidential information in Parliament. The injunction was granted by Justice Charles yesterday and lasted until May 12. It remains in place.

The judge’s order said government ministers are “prohibited” from any further appropriation, perusal, use, publication or disclosure in Parliament or elsewhere of any correspondence, including emails, belonging to the applicants.

However, House Speaker Dr Major said the Attorney’s General’s Office was seeking to have the injunction set aside.

Dr Major said the judiciary has no jurisdiction over Parliament and the interlocutory injunction against the Foreign Affairs and Immigration Minister, Education Minister Jerome Fitzgerald and Attorney General Allyson Maynard-Gibson, violates the principle of separation of powers.

In March Mr Fitzgerald accused STB of being a political organisation seeking to “overthrow” the Progressive Liberal Party government under the guise of an environmental group. During his contribution in the House, Mr Fitzgerald read private emails from STB members and others, which he said bolstered his claims.

Speaking to reporters outside Cabinet, Mr Fitzgerald recently warned members of the environmental group to “batten down” because a “category five” hurricane was on its way, as he threatened to table “every single” email and bank statement in his possession if needed to protect his integrity and parliamentary privilege.

Mr Mitchell has previously claimed that some $8.25m has been filtered through various organisations connected with STB – locally and internationally – from 2013 to 2015.

Also speaking in the House of Assembly in March, Tall Pines MP Leslie Miller alleged he saw a document that showed that five members of STB take home a combined salary of $740,000.

The disclosures came as part of a fierce political debate over claims included in an alleged murder-for-hire plot outlined in court documents filed against Canadian fashion mogul Peter Nygard by billionaire Louis Bacon and several other STB directors in early March.

Mr Mitchell said, “you cannot approbate and reprobate at the same time.

Indeed, but you can sure be a cabinet minister and a reprobate at the same time!!

The HOA is full of reprobates

Oh boo hoo. Someone get this guy a tissue...

I hope it's for the shit coming out of his mouth

Hold up... what happened to the 'Big Reveal' Fitz was so excited about? I dont feel shaken to the core so far.

How can we believe that anyone in the PLP will go bankrupt? That is an impossibility... especially when they are in power. There is NO WAY that they can possibly spend as much as they have stolen and received.

Please call elections so that I don't have to see this arrogant ass again. He can't function outside of Parliament anyway. That is why he is so afraid of the QC!

Ninety percent of Bahamians are waging war against this stupid asshole ....... we all want our pound of flesh

Fweddy Boy has been nothing but one monumental embarrassment for the Bahamas. Statesmen and other senior diplomats around the world who have come to know Fweddy Boy simply roll their eyes and whisper to one another: "Why on earth would the Bahamas have selected such a contemptuous full of himself tart to represent their interests in the international arena?"

welcome to a whole where when you do wrong legal actions would be taken upon you and you would be prosecuted, stick around and you would learn more about what doing wrongs does and leads to.

Or like a woman,or transgender or what the other type is?. Don't forget the referendum coming up we can't descriminate.

Ignore the court order fweddy wit your hard mout. QC would have a field day tearing you a new bungy hole.

Comrade Hangman, I does hopes you is reading all these red/green posts on this hereto Tribune blog page. So many potential candidates for your trapdoor. No longer needs ask them what color t -shirt, they wish wear at their hanging time... cuz red is now officially gone all green.
Good God almighty....Papa, you is now being replaced by your nemesis Bran. While Loretta heading Abaco - also into forced political retirement.
Tribune needs order more printers green ink.

I am so glad somebody is going after him. I want Smith to win this war. I need to see Mitchell and his party gone!!!!!!!

The whole PLP party "haulin" hip from this guy. . .the only man who single handedly "shut down" them rogues in the house!! All of them only talking from the house like they "bad" BUT BEING VERY CAREFUL WHAT THEY SAY WHEN THEY COME IN PUBLIC!

Smith done say he will "broke" Mitchell and his crew if they let out any more of the STB information!!

They mout dead hard but as you say they are being very careful outside and for that fact inside the HOA. He should "Broke" them because they tief all they got.