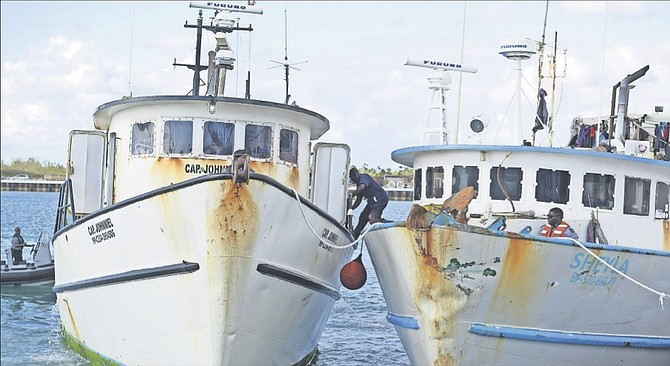 Nonetheless, Acting Defence Force Commander Captain Tellis Bethel said the apprehension of the Dominicans signals the force’s increasing success in countering poachers. Their success is attributed in part to the government’s acquisition of several defence force vessels in recent years.

“Our customers think (we are doing a better job responding to poaching),” Captain Bethel told The Tribune on Friday. “The Bahamian clientele, the local fishermen, they have been reporting huge catches on the Bahama Bank such as they have never seen before over the last ten, some say 20 years. There is some evidence that as a result of the Defence Force conducting its patrols with the recent acquisition of its patrol crafts, we are beginning to roll back the Dominican poachers. Years ago they were able to fish at will, but now because of the presence of the Defence Force they really have to exercise caution when they do what they do. We are in a position where we are able to respond quickly, whether during a regular patrol or responding to a report by fishermen.

“Our success owes to greater resources. The acquisition programme under the government’s approved Sandy Bottom project entails acquisition of nine patrol crafts. All nine have been constructed and delivered. The latest capture involved the most recent delivery of patrol craft, the Her Majesty’s Bahamian Ship Madeira.”

The Madeira sustained damage during the encounter as a Dominican vessel rammed it while attempting to escape, damaging the hull.

“I think (the officers and marines) did extremely well with regard to the incident considering we had ten to 12 foot seas,” Commander Bethel said. “We had a relatively small crew but it was very well executed such that he could apprehend two vessels in one incident.”

During the encounter officers captured a significant amount of fish that was on board the Dominican vessels.

The Dominican poachers captured will now be taken to court and charged for illegally fishing in the Bahamas.

This situation reminds me of the old days when we used to cross the Great Bahama Bank at night via Northwest Channel on our way to Miami by way of Mackie Shoal and North Rock, just off North Bimini. In those days, the early and mid 1970s, you could see dozens of Cuban-American fishing boats anchored all across the Bank especially north of our route and up toward Great Isaac, the Gingerbread Ground, Hen and Chickens, etc. The Police Marine Division started to crack down on the situation in the mid 1970s sometimes with startling results. Check the newspaper stories from those days for details. Of course, poaching of land and marine resources is an international problem but a country that makes no effort to protect its natural resources soon will have no resources to protect whether from internal or external predators.

Hold on... one of these boats intentionally rammed, and thus tried to sink one of our defense force boats and therefore drown our officers? The captain of the boat should have been shot dead on the spot and if he is not dead, should be imprisoned for life for the attempted murder or several officers.

as a fisherman myself in my youth it is now warm my heart to see that there is perhaps a new breed of defence officer doing the noble and just cause to protect our waters and fisheries. Too many times in memories of the past they did not honor their duty and oaths but would side with the poaching captains to get a little sumtim in they pockets. My prayers of those years seems to be finally heard and these treasons are coming to an end.

This is something the Government has done right buying Defense force boats. It is all right if my VAT money went towards this good and important cause.

Well at least The Bahamas Defence Force won that one. When the confrontation was with the Cubans they sent MIG jets and sank the defence force vessel causing loss of life. But expect the Dominicans and other poachers to get more aggressive as fishing resources become more scarce and the Defence Force has more capacity to guard our waters. The captain of the Defence Force vessel that apprehended the poachers and his crew should receive commendation fron the government, or the Defence Force or both. It is understood that his wise decision making and ability to keep his crew calm but in control is what prevented loss of life. The confiscated boats should be auctioned off with the catch to pay for the damage they caused to the new defence force boat.

Excellent work by the Crew of HMBS Madeira. Now Will the courts follow up and imprison and fine these pirates to the fullest extent of the law? Actually, just follow the money and get every red cent you can, that is the only thing anyone understands these days.

They need a minimum of ten years in prison. That should send a clear message

sheeprunner - it is very expensive to sink a boat if it is done correctly. You need to pull all the diesel and oil from the tanks and the lines. I'm sure other things would need to removed and I doubts that anyone in government has the right education to do this correct. Just seize the boats and of course the catch and sell them to local fisherman or for parts or for scrap.

I wonder why and how a DR fisherman came come into our waters. . .fire on us. . .ram our boats and we just played "hope scotch" with them! Those boats have howitzers on their bow that can punch a hole as big as the DR right through those boats! Those DR fishermen have committed an international act of war! Yet we are wondering how to deal with them? This is no game. . .if we are not prepared to show the DR that "ween playin wid dem". . .each should be held for acts of war crime and sentenced to no less than 20 each. . .then we can deal with the others from the non-aggressive boat as regular "tiefing fishermen them"! As for the offending captain. . .other nations would execute him. . .or at least send his tail to jail for life or something near to it. . .if thtey will not listen to our warning. . .lets make an example of this crew that the whole world will not forget and see we are not playing!