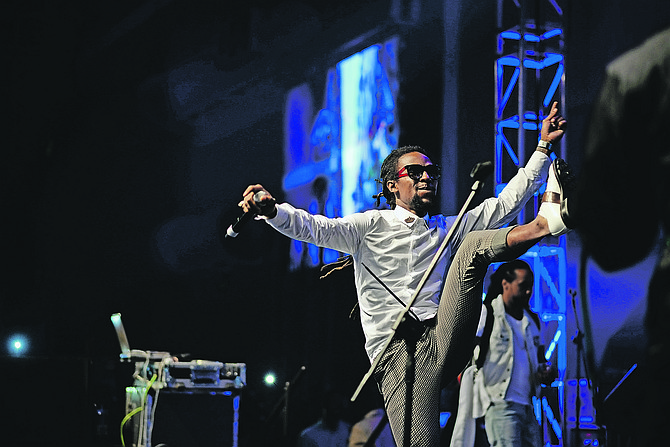 JAMAICAN reggae star Jah Cure was involved in a brawl while trying to be a peacemaker in a fight with a group of “intoxicated” Bahamian men at the Atlantis resort early yesterday morning, according to a local event promoter.

An official from Fresh Entertainment Bahamas (FEB), told The Tribune that Jah Cure, whose real name is Siccature Alcock, was one of three people hurt while attempting to stop the fight involving several others, which, according to a video on social media, occurred in the Coral Towers lobby of the Paradise Island resort.

Even though he appeared unconscious in the video, the representative said the 38-year-old singer was “not knocked out” but “tripped and fell” running after an assailant.

Jah Cure and his group, whom a FEB representative said were also

intoxicated, were heading to their rooms after leaving a concert in which he had just performed, while some “local fellows” were leaving the hotel. At some point someone “made a statement” at Jah Cure’s group, to which the latter responded in kind, ultimately leading to the confrontation, The Tribune was told.

“Jah Cure fell running after one of the assailants, tripped and fell to the ground,” the FEB representative said. “He was not knocked out like the voice note circulating on social media says. No one was seriously hurt and his management is addressing (the matter) with the proper authorities.”

In the video circulating online, a woman was seen being thrown to the ground as one of the men who she tried to stop from fighting is pushed down on top of her. She later shrieks in horror as another man in a white shirt is also pushed onto the ground on top of her. She continues to try to stop the fight, trying to physically restrain the men as she best she could.

For the majority of the video, Jah Cure could be seen with his arms outstretched, trying to quell the confrontation along with another man wearing a green shirt.

The artist is later seen trying to evade a barrage of blows from another man near the hotel’s automatic sliding doors, who strikes at him relentlessly. Towards the end of the video, numerous persons, possibly hotel officials, could be seen standing in one of the doorways to the outside of the hotel, with Jah Cure seemingly lying unconscious at their feet.

At least two men attempt to tend to Jah Cure, asking the singer if he is “all right” and if he is “good.” However, it is unclear from the video if Jah Cure responded to their words or if he was conscious.

When asked how Jah Cure was now handling the incident, the promoter said: “He chalked it up - and I really respect him for this - but he chalked it up as them being intoxicated and reading into things. And again, like I said, he was trying to stop something. It wasn’t like it was an actual attack. So we’re all human, we know when we mess up.”

Nonetheless, the promoter, who did not want to be named, regretted the situation, observing that it could have far reaching implications.

“Unfortunately I’ve gotten calls already from the US, from reporters that cover the reggae scene in both New York and Atlanta,” she said. “It went viral here, but it’s far reaching. It’s three people that got hurt in this matter. Everybody’s focusing on Jah Cure being laid out, but a young lady got pushed and fell, and she fell because she was trying to stop the fight as well.

“She was a passerby that saw something erupting and she made a statement. She came to say ‘stop’ and she was behind the guy who initially got pushed. So he fell backwards and she still tried to stop it because, again, it was somebody said something. And she was a witness to it. And she was trying to be a Good Samaritan.

“But at the end of the day, without audio and just video, around the world it looks bad.”

This is why Sir Sol didn't want Bahamians on PI.