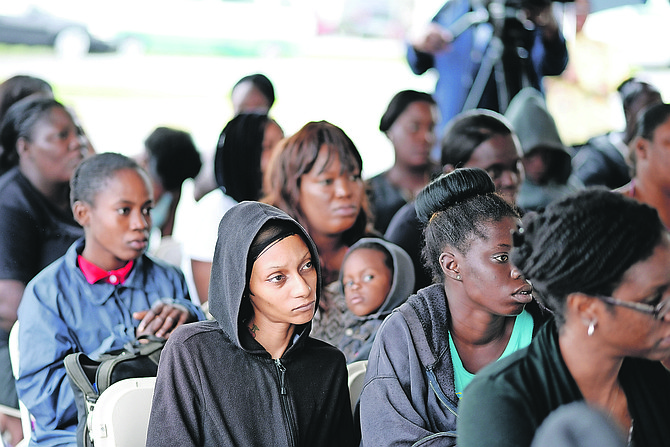 FIFTY single mothers with three or more dependents received $5,000 in food vouchers yesterday as Bank of The Bahamas Ltd (BOB) and the Bahamas Feeding Network (BFN) helped to ease the problem of hunger for families in the country.

The mothers each received one $100 food voucher as a result of matching $2,500 donations made by BOB and the BFN at the bank’s Carmichael Road branch.

Philip Smith, executive director of BFN, said that in response to a poverty level of 12.8 per cent - or one in every eight persons - in the Bahamas, the BFN collects funding and food resources and then distributes them to 125 members including churches, feeding organisations and soup kitchens. Mr Smith said BOB’s matching donation will assist in helping the 50 single mothers to feed their children, particularly after the impact of Hurricane Matthew on the finances of already struggling families.

“You will find that hunger often exists in homes of single mothers with multiple children because a lot of times those mothers do not have the help, so this donation will make a way for these mothers to put bread on the table for their children,” he said. “I think adults being hungry is bad enough but when you find children being hungry who cannot help themselves it just touches our hearts.”

Byron Miller, BOB’s manager of sales, said the bank was pleased to support this initiative because it believes in giving back to the communities it serves.

“BOB is a community bank. We are made up of virtually every Bahamian family and the realities that confront our people today include of lack of funding for food and we want to demonstrate today that we hear our people and we see our people, along with the ability to respond to their physical needs. So we’re not looking as a Bank of Solutions to only generate profits from our people but to give back and in that spirit of giving facilitate the Bahamas Feeding Network to assist these mothers,” Mr Miller said.

Several of the voucher recipients said what it meant to them to receive assistance from BOB and BFN. Ivanka Linden, a grocery packer and single mother with seven children ranging in age from four to 26, called it “a blessing from God”.

“Words cannot explain how difficult it has been at times but I thank God for being there with me through it all,” she said. “I am desperately in need of a home. Right now I’m living in Bain Town and before I came here I had to put some buckets down to catch the water leaking in my home. It’s been so rough but I thank God though it all.”

Rosemary, a single mother of mother of 11 children aged between two and 23, said she has been homeless before “sleeping on the beach” and she sometimes sells items like water, gatorade, cookies and coconuts to feed her family. “With the hurricane things is rough right now so it helps a lot because right now I don’t have anything in my house to eat and I am up against the wall with my rent,” she said.

Carmeta Butler, a single mother of seven, has been unemployed for the past six and a half years and recently lost her home and everything in it to a fire caused by an electrical shortage. Her youngest son has also been seriously injured in a car accident. “Right now I am homeless, clothesless and phoneless. I’m seeking help from anyone that is interested in helping me as soon as possible,” Ms Butler said.

Since its inception in December, 2013, the Bahamas National Feeding Network, the brainchild of Ambassador Frank Crothers, with a board of committed directors, has distributed more than $350,000 in food coupons to some 105 soup kitchens and churches dedicated to feeding their communities. For this latest initiative recipients were recommended by BFN member partners with final selections being made by a BFN committee.