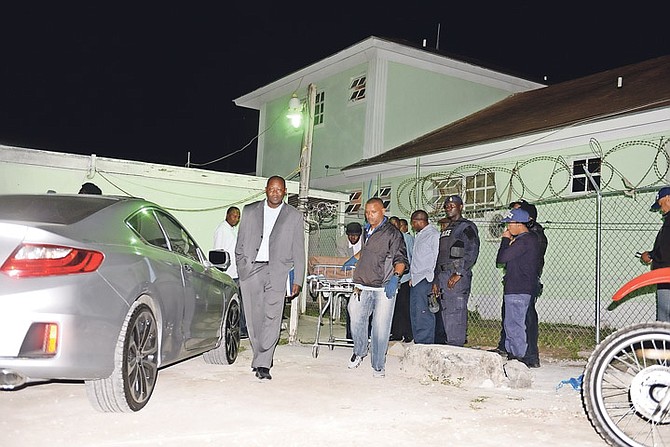 The scene on Monday at Sumner Street after a teenage boy was shot dead. Photo: Shawn Hanna/The Tribune

A YOUNG teenager was shot dead on Monday night when gunshots rang out in the Soldier Road area.

Police said they are actively investigating the circumstances behind the latest fatal shooting in the capital.

The incident, which occurred on Sumner Street, at the rear of a two-storey property, brought the country’s murder count within seven homicides of 100 according to The Tribune’s records.

The victim, whose identity has been withheld pending official identification by next of kin, was said to have died within moments of being shot, according to Chief Supt Clayton Fernander.

The officer in charge of the Central Detective Unit said that police responded to the sound of gunshots off Soldier Road at about 8.05pm.

“On arrival, they met the lifeless body of a male who appeared to be in his early teens,” the senior officer said.

“At this present time, we don’t know what happened here but as you can see there are a number of houses here in the yard and persons live in the yard. We have officers who are doing door-to-door inquiries to find out what exactly happened.”

“They only heard shots rang off and when they checked, they met the young man who was lying at the rear of this yard with the gunshot wound,” Chief Supt Fernander added.

The CDU head is appealing to residents in the area to assist them in “advancing this investigation”.

“The mother came on the scene. He lived somewhere in the general area so we are speaking to her to find out exactly what she may know or how he got here or who he may have come here to see,” Mr Fernander said.

On Sunday afternoon, police were called to the scene of a murder on Palm Tree Avenue after the victim had been discovered by a relative lying on the ground of his home with gunshot wounds to the body.

Anyone with information on any of these homicides is asked to contact police at 911 or 919, the Central Detective Unit at 502-9991 or Crime Stoppers anonymously at 328-TIPS.

This is a dang shame how our young men are being killed. . .

Look at the razor wire around the houses. This is not a normal city when residents need razor wire to protect their property. Look what we have done to ourselves! What a stupid way to live!

If it's not razor wire, it's rod iron over windows and doors. This isn't a quality life and shouldn't be acceptable to Bahamians.

So they say they are awaiting official identification by next of kin, but then they went on to say his mother was on the scene...that makes no sense to me.

It makes sense. There's the father, brothers, sisters and maybe grand parents and first cousins. It's only courtesy to allow time for those people to be notified in a humane way.

This is what happens when a six year old can repeat every rap song that comes on the radio,without missing a beat. Songs about wild sex and drugs, and gangs and jail and sleeping with your best friend's girl, but they don't know two lines of the Lord's Prayer: .

Our Father, which art in heaven, Hallowed be thy Name. Thy Kingdom come. Thy will be done in earth, As it is in heaven. Give us this day our daily bread. And forgive us our trespasses, As we forgive them that trespass against us. And lead us not into temptation, But deliver us from evil. For thine is the kingdom, The power, and the glory, For ever and ever Amen

Hosea 4:6 "My people are destroyed for lack of knowledge; because you have rejected knowledge, I reject you from being a priest to me. And since you have forgotten the law of your God, I also will forget your children."