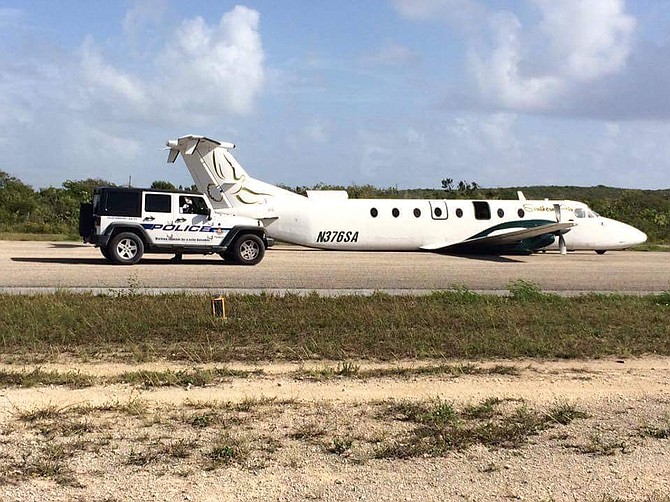 The Southern Air plane on the runway at Deadman's Cay, Long Island, on Friday.

A SOUTHERN Air flight from Nassau with 11 occupants crash landed on the main runway at the Deadman's Cay airport in Long Island on Friday morning.

There were no injuries, according to Civil Aviation officials, who said that the airport was closed for several hours as a result of the crash that occurred shortly before 10am.

"Reports received indicated that aircraft N376SA landed with its gears in the up position," read a statement from the Department of Civil Aviation on Saturday.

"Reports also indicated there were 11 souls on board - 9 passengers and two pilots - at the time of the occurrence. No injuries occurred to occupants of the aircraft."

The airport has since been reopened, and the Accident Investigation Unit has launched an investigation.

Rumours have it the pilot and co-pilot simply forgot to lower the landing gear and the low altitude sound warning in the landing gear up configuration had apparently been non-functional for quite some time.

How on earth do you forget to put the landing gear down?

They have no more planes. I heard that was the last one.

Two pilots, both should check that there are 3 green lights indicating that the gear is down and locked for landing.

I will not be traveling on southern air anymore, seems as if this company neglects their equipment. I guess I will be using Sky Bahamas from now on.

This is intriguing -- just because, I ran the tail number thru the FAA database:

So I looked at the address of registry. The Google StreetView pic is attached. It was a very modest house belonging to Alpha A. Gibbs.

So the real question is why is this aircraft registered in America to a defunct company -- not registered in the Bahamas, and probably not paying insurance ?????? if the company is defunct. Makes you wonder about beneficial ownership. WTF is going on?

The shell company is dead !!! The beneficial ownership is in question. The registry is not valid. The numbers on the plane is a fraud. Something strange is going on. This ownership of this plane is not traceable according to public records and that is against the law.

the big question here is how effectively is Civil Aviation monitoring these people's maintenance and training? is it free of government interference? for such a small country, the accident rate is awfully high, probably matching those African countries we typically use as the banner toters of incompetence..

Don't expect to get any answers from G. Hanna-Martin to the serious questions raised by "banker". She is about as crooked, dumb and incompetent as they come. Christie only values her loyalty and knows only too well she is about as worthless a cabinet minister as the Bahamas has ever had....apart from Christie himself of course as PM and Minister of Finance!

I flew on one of their planes to long island and we all had this strange sharp ear ache bubble gum couldn't solve for the entire flight. Maybe pressure issues.

No emergency apparatus on the island if the plane caught a fire and if people got hurt.