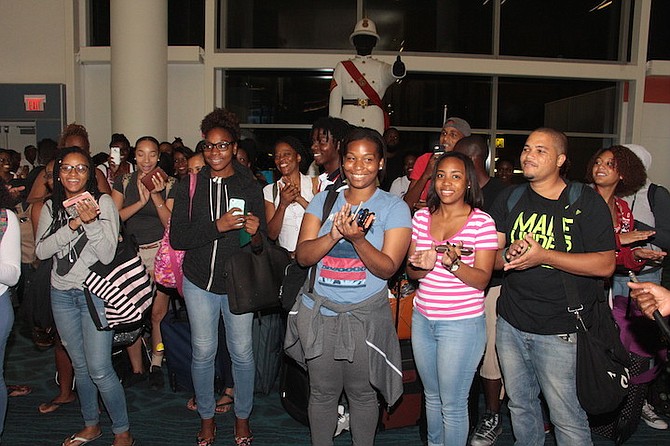 Happy Bahamian students back at Lynden Pindling International Airport on Saturday night after being brought home by Bahamasair from Jamaica, which is threatened by Hurricane Matthew. Photo: Eric Rose/BIS

BAHAMIAN students in Jamaica threatened by the approaching Hurricane Matthew arrived in Nassau late on Saturday night on a Bahamasair flight organised in conjunction with the government.

Minister of Foreign Affairs and Immigration Fred Mitchell said it had been a successful flight and students were greeted by the Prime Minister at Lynden Pindling International Airport when they landed around 11.15pm.

Mr Mitchell added that no additional Bahamasair flights to Jamaica are needed for Sunday morning after earlier fears the flight was over-subscribed due to the cancellation of a Caribbean Airlines flight to Nassau on Sunday.

He paid tribute to the Honorary Consul in Jamaica, Alvita Knight, for marshalling the operation and said he had been in contact with Jamaican authorities throughout the day.

Earlier on Saturday the ministry said it was informing parents of students studying in Jamaica, as well as the students themselves, that a Bahamasair flight would depart from Norman Manley International Airport, Kingston, on Saturday night.

Matthew, a powerful category 4 storm, is forecast to hit Jamaica from late on Sunday.

A statement from the ministry said: "The Jamaican Government and the education institutions have assured the Bahamas Government that all the necessary safety precautions are in place in preparation of the hurricane for those who choose to stay." It gave details of who to contact and when to report to the airport.

Details on the return flight - which Mr Mitchell said would go once the all clear is given in Jamaica - will be given on the Ministry's website or Facebook page at mofa.gov.bs and www.facebook.com/mofabahama. Mr Mitchell said no similar arrangement needed to be made in respect to Cuba.

Knowing Christie and Fweddy Boy, only those Bahamians in Jamaica whose families are well known long time PLP supporters will be able to get priority seating on this special Bahamasair emergency evacuation flight from Kingston.

Mudda take sic, with a possible Cat 5 storm bearing down on us (and Jamaica), it is NOT time for petty politics. It's a time for ALL Bahamians to step up and look after each other. Save your political bs for another time, please!

I do hope the Bahamas government will also consider similar evacuation flights to the southern islands for those wishing to leave, at it looks as if they are going to get hit hard. Again. And with the latest shift to the east, there will be no mountains of Cuba to break up this big and dangerous storm, so it's possible for there to be a massive Cat 5 on top us by Tuesday.

The real world eludes you my friend. What you don't know is that the number of Bahamian students and other Bahamian nationals currently in Eastern Jamaica far exceeds the seating capacity of any jet in Bahamasair's fleet today.....and you can be rest assured most of them want to be on that one special Bahamasair emergency evacuation flight. The jet was fully booked by "insiders" well before the announcement of this special flight was even made by Bahamasair. There's nothing in the Bahamas that's not about politics as far as the PLP are concerned my friend...even in the midst of a grave crisis. Welcome to the cold harsh real world as viewed by the corrupt Christie-led PLP government!

what a waste of public funds.. just another example of why we are $7.0bn in debt . how,come they didn't evacuate all bahamian students from the US when the cops started shooting all the blacks.. surely soneone must have been concerned about their safety..