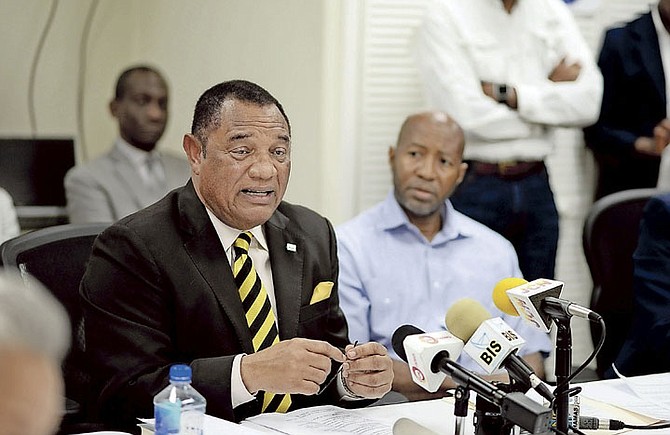 PRIME Minister Perry Christie urged Bahamians to take the “potentially catastrophic” category four Hurricane Matthew seriously and prepare for the “worst case scenario” as he suggested that the government is fully prepared to declare a state of emergency if officials find that the monster storm causes irreparable damage to the country.

The Prime Minister, along with several high ranking weather, law enforcement and safety officials, delivered a sobering update yesterday on the country’s preparedness, saying Matthew had strengthened and was expected to bring dangerously strong winds and extremely heavy rainfall.

Trevor Basden, Director of the Bahamas Meteorology Department, stressed that a “dangerous” storm surge - an abnormal rise in water pushed by the hurricane - was expected. He projected it to reach around 10 to 15 feet above normal sea tide.

To that end, officials called on Bahamians, especially those living in low lying areas or near shorelines, to evacuate their homes and seek shelter with relatives inland or at shelters scattered around the country.

Mr Christie said the government was prepared to forcefully remove anyone who refused to evacuate homes where their lives and safety were threatened.

However, officials are asking residents to be prepared and begin to gravitate toward a place of safety to ride out the storm in the capital from as early as noon today.

“It is for us to advise you that the storm has strengthened and, from what we have seen in Haiti and elsewhere, is bringing dangerously strong winds and extremely heavy rains,” Mr Christie said at the National Emergency Management Agency (NEMA) headquarters on Gladstone Road.

“As we know from the experience of last year’s hurricane, these natural phenomena can be violently unpredictable. But it is for me to again say to you that New Providence, where 85 per cent of our population lives, will take a direct hit. That is the latest assessment and therefore everything I say is based on the reality that we are going to have to prepare for a worst case scenario with respect to the impact of Hurricane Matthew.

“We never intend to cause undue fear but what we are very concerned about is that every resident on this island take very, very seriously what we are confronted with.

“Sea level rise means a lot of water coming across the land. It means therefore that the government of the Bahamas must take every precaution to ensure the maximum safety of the residents of this island and, for that matter, the residents of the entire Bahamas.”

He continued: “The best advice that I have received is if you live on the southern coast of any of our islands, including New Providence, I am advised that you may be exposed to significant risks. It is essential therefore that as you now make preparations to prevent impacts on your home, your property and yourselves, that you seriously consider now moving to higher ground and a safer place.

“This is particularly true for those who are amongst the elderly, sick and whose movements may be difficult. If you require our assistance please allow us to hear from you so that we may be able to provide assistance to you.”

Mr Basden said the government continued to take very seriously Hurricane Matthew. Projection models produced by meteorologists in the country outlined when respective islands were expected to experience the impact of the category four storm.

“Just based on averages from how this will be affecting other islands you can expect to be under hurricane force winds for at least six to seven hours and that will be at the time 130mph or so and tropical storm force winds will be impacting New Providence for at least 12 to 16 hours.

Police Commissioner Ellison Greenslade sent a strong message to those living near the coast to evacuate. He said this would prevent officers from having to battle storm conditions to rescue people who could have avoided danger by evacuating ahead of Hurricane Matthew.

He said: “If you are residing on a coastline on the southern side of any island of the Bahamas, Mother Nature has a fury that you will never, ever imagine. We are not intending to frighten you, but if you are going to help yourself and your families this is the time now to make a decision to move.

“Your stone building or split level house is no match for a tidal surge and mother nature. Your vehicle is no match.

“If you live in Adelaide, South Beach, Marshall Road, right along the South Beach corridor and right on to the back end of Sea Breeze where you have those canals the water will rise. Those ponds will merge. You will be challenged. I neglected to tell you Coral Harbour, where there is a network of canals, you are going to have to make some good decisions now.

“Please do not put us in a position to have to come out in the middle of the storm to try to rescue you in very difficult circumstances.”

He added that officers will also be out in full force to police communities and prevent criminal activity.

“I have got quite a lot of police officers. You’re going to stay out of people’s residences and neighbourhoods. If we meet you loafing I am going on record to tell you if you are loafing and you have got bad intentions and you wouldn’t go to your home to your bed and you are loafing these neigbourhoods where people have left their homes, you are going to have a chat with the police force and the Royal Bahamas Defence Force.”

He also urged Bahamians to refrain from excessive alcohol drinking. He said as a hurricane impacts the country this was not the time to be drunk as this would prevent anyone from making responsible decisions.

At 8pm last night, Matthew’s centre made landfall near eastern Cuba’s sparsely populated tip. With maximum sustained winds of 140mph it was moving north at near 9mph. A turn towards the north north west is forecast today, followed by a north west turn tonight.