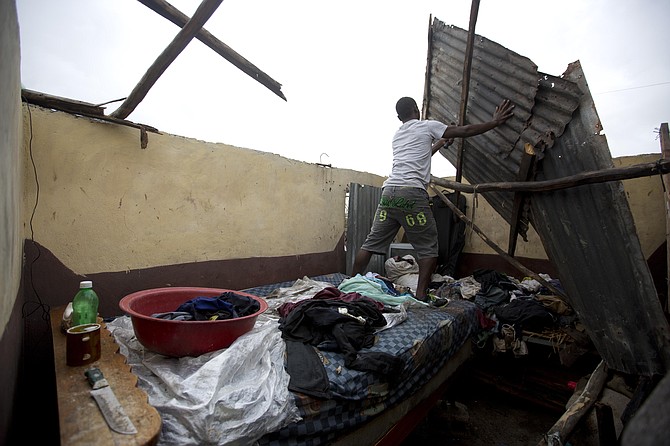 HAITI'S death toll soared on Thursday as rescue crews began reaching remote corners cut off when Hurricane Matthew slammed into the country's southwest peninsula, the first Category 4 storm to hit Haiti in more than a half century.

Bodies started to appear as waters receded in some areas two days after 145mph winds smashed concrete walls, flattened palm trees and tore roofs off homes, forcing thousands of Haitians to flee. At least 122 people died in Haiti, the headquarters of the Civil Protection Agency said on Thursday night, and authorities expected the number to rise. Mayors and other local officials in marooned areas were reporting higher numbers. Overall, 128 confirmed deaths have been attributed to Matthew in the Caribbean.

On Thursday night a Haitian official said the death toll was 283 and expected to rise further.

Those killed in Haiti included a woman and her six-year-old daughter who frantically abandoned their flimsy home and headed to a nearby church to seek shelter as Matthew surged in early Tuesday, said Ernst Ais, mayor of the town of Cavaillon. "On the way to the church, the wind took them," Mr Ais said. At least 12 people died in his town, and he said he expected the number to increase.

Officials were especially concerned about the department of Grand-Anse on the northern tip of the peninsula, where 38 of the known deaths were reported, the highest toll for any area. "Devastation is everywhere," said Pilus Enor, mayor of the town of Camp Perrin. "Every house has lost its roof. All the plantations have been destroyed. ...This is the first time we see something like this."

People faced an immediate hunger crisis in Grand-Anse's largest city of Jeremie, said Maarten Boute, chairman of telecom Digicel Haiti, who flew there in a helicopter. In the nearby seaport of Les Cayes, many people searched for clean water as they lugged mattresses and other belongings they were able to salvage.

Officials with the Pan American Health Organization warned about a possible surge in cholera cases because of the widespread flooding caused by Matthew. Haiti's cholera outbreak has killed roughly 10,000 people and sickened more than 800,000 since 2010, when it was introduced into the country's biggest river from a United Nations base where Nepalese peacekeepers were deployed.