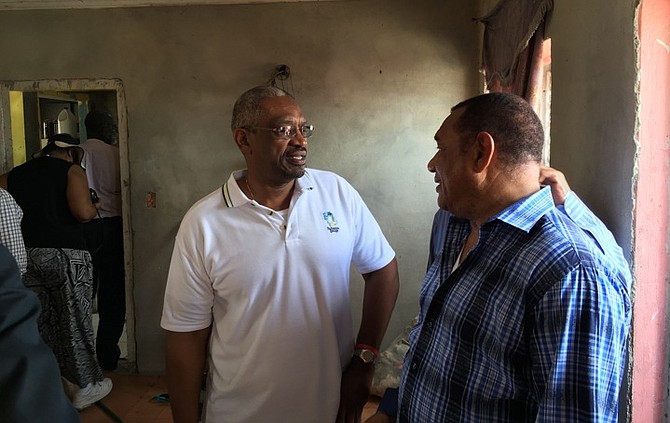 FREE National Movement Leader Dr Hubert Minnis has called on the Christie administration to declare all of the areas devastated by Hurricane Matthew "disaster areas", insisting that the move should be paired with robust exigency orders and extensive rate cuts by financial institutions and private business to "help rebuild the country and keep Bahamians safe”.

In a statement on Sunday, the Killarney MP urged immediate action, claiming that despite its sheer strength, Hurricane Matthew was unable to break the resiliency of the Bahamian people.

Dr Minnis said after viewing the devastation of the massive category four storm first hand, he feels it necessary for the country to declare a state of emergency, granting it possible for immediate issuance of an exigency orders to allow homes, its contents, vehicles and or its parts that have been damaged or destroyed, to be replaced duty and VAT free.

Dr Minnis said these orders should remain in place for at least six months.

Further to that, he strongly encouraged all financial institutions to provide funding for replacement equipment or materials at reduced rates in these cases.

Dr Minnis’ statement read: "We need to take steps together to see that everyone gets back on their feet as quickly as possible in order for all Bahamians to recover. These two easy recommendations will alleviate a huge burden on Bahamians who must work to rebuild their lives and I think we can all agree that now is not time for anyone – either government or financial institution – to profit off the suffering and hardship of Bahamians in need.

"And while we all thank God that there have been no major injuries or deaths in the initial aftermath of Hurricane Matthew, I believe there are several other ways to ensure that we continue to safeguard our communities and the people."

Dr Minnis went on to recommend that the government advise individuals whose homes or businesses have been severely damaged not occupy such facilities until declared structurally sound.

He also called for the government to advise Bahamians not to drink well water unless - and until - it has been properly tested because it could be contaminated from the flooding, and urged immediate fogging in areas that were flooded to prevent against mosquito borne diseases including the Zika virus.

"It has been a horrific few days for Bahamians across our islands but thankfully there has not been any reported loss of life. We will get through this by working together with our neighbours, friends, and families to help each other rebuild. And I believe these recommendations can be solid first steps that the Government can take to meet those ends and to help Bahamians start to recover.”

“I wish to commend NEMA, our law enforcement agencies, and the many volunteers, for their combined efforts in working together, rescuing those in danger, and keeping our people safe. May God continue to bless our Bahamamaland,” the statement concluded.

In the wake of Hurricane Joaquin, the massive storm that ravaged the central and southern Bahamas for two days last year, Prime Minister Perry Christie declared an exigency order within a week of the storm's passage.

Additionally, the government declared the waiver of landing fees, departure tax for non-commercial flights bringing in relief goods, and Department of Customs processing fees on imports in the above-mentioned islands for a period of one month. The islands of Acklins, Crooked Island, and Long Cay were also declared sufferance port areas for a period of three months.

The order was extended for a second 90-day period, which ended on April 3 this year.

John, obviously the people do not believe the government. The gas station lines are extremely long and only 20% of the houses have electricity.

Comrades! Pain does not exists within the colours your political party's t shirts. Unfortunately the past history of the promises 'put the people first' talk by our two political leaders have 'never' produced the lasting results that regardless of the color of your political party's t shirts that pain is pain by those in need of either a helping hand up, or offered special easily accessible short-term financial relief considerations. We shall wait to see of the two leaders are willing to not only work to cross the aftermath of Hurricane Matthew's destruction together but to use their influence.to keep their respective political colleagues urge for media coverage in check?
I don't believe for a moment that we shall see The Eucharist is the sacrament of hurricane Matthew unity that will ever makes these two leaders political ambitions mold one body for, by and behalf of the people in need of statesmanship.
I know better than to think that the two most self-serving publicity seeking MP's and one Senator in particular, does come to mind?

What they did for the Joaquin victims, they need to do for the Matthew victims ......... do not show any favoritism now that the election is near ........ God has a sense of mercy (and humour) by sparing the SE Bahamas from Matthew, because the government has been very tardy in its promises to our communities ............. We trust that our repairs will be sacrificed for the bigger voting districts up north in Andros, NP and GB

The government and opposition ought to vote to help Bahamians ' now in their hours/days/weeks months/years of need!

Well I drove to Clifton and BEC was in a mess. A wave did come in and damage the power plant. But there were crews out there replanting poles that were broken and running new wires. There was also a fuel tanker delivering fue. So there is definitely no shortage. But part of what is causing the long lines is because so much of the power is still off. Some people are using their cars to charge their phones, to listen to the news or to escape the heat by running the a/c. They also need fuel for generators. Power in some areas have been off for almost a week so persons with generator have to refill their tanks. Since Clifton is still being repaired, BPL may have to do load shedding as more customers are put back on the grid.

The water and ice lines are because persons are showing up at the plants and purchasing these goods as fast as they are being produced so little, if any is getting to the food stores and other distributors. Then you have the 60 plus gas stations that normally sell ice and water. Some are still closed due to damage and others have their hands full with the gas customers. And now the pressure is moving to the hardware and building supplies stores. Many have sold out of generators and chain saws. Batteries and batter operated radios are also gone. So now the rush is on roof repair materials. There is roof damage all over the island from Yamacraw to Lyford Cay. In some parts of the south virtually every single roof has been damaged. And some homeowners also have to contend with flood damage which led to the loss of furniture, electronics and personal items. The only thing that is not in short supply right now is work.

"The only thing that is not in short supply right now is work." Lol. Way to see the silver lining John. Lots of work to do.

People are still complaining that one major bank has not offered banking services to its customers since Tuesday of last week. None of the ATM's are working and all the bank branches remained closed on Saturday. Since today is also a holiday , more than likely the bank will remain closed so if the ATMs are still not up and running persons will not be able to access funds for much needed hurricane relief and recovery until Tuesday. Regulators should bring pressure to bear and ensure this bank has some of its branches open tomorrow even if they have to revert to a manual system and limit their services.

My fellow Bahamians I know you want exactly what America wants. You want disaster areas declared and you want the government to fund rebuilding. But we are not America- we simply do not have the money or the economic strength to even pretend to be like America. If the government borrows another dime for its so called hurricane relief, we may as well get our inflatables now and plan our escape to the America we love so because that will be the end of the Bahamian economy. 80percent of what is borrowed will be squandered and generations will be left holding that bill. We need to work hard, call up some imagination, let the system do its job- meaning people need to claim insurance and the companies need to pay without rate increases, the people need to use their money on their house instead of "need to relax" trips to Miami, and in this instance rather than looking all around to help Haiti, Cuba etc. we need to figure out how to help Grand Bahama, Andros and South Beach. Honestly, I don't understand Bahamians who run to help everywhere else but forget their neighbor in need. Not that they don't "need", but at least here you might see where your labour or assistance is going.