A 'Heck Of A Time' On Grand Bahama After Hurricane Matthew 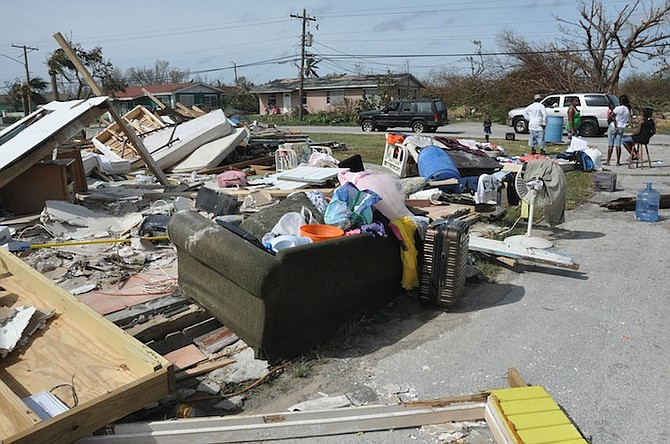 IT's a "heck of a time" in Grand Bahama, an island administrator said on Sunday as residents continued clearing debris from roads, homes and passage ways following the damage inflicted on the island by Hurricane Matthew.

Preston Cunningham, administrator for Freeport, said he has been in three major hurricanes in his life, including Hurricane Joaquin in Acklins last year. Matthew, however, is the worst he has ever experienced in terms of damage.

"In West Grand Bahama, everyone got hit. Some homes fell flat to the ground. In Port Lucaya, the marketplace roof peeled right off. It looks like an earthquake around here almost."

The National Emergency Management Agency (NEMA) also began its assessments of North Andros and Grand Bahama on Saturday, as those areas were hardest hit by Matthew's 140mph winds.

In a statement, NEMA said a team that includes Prime Minister Perry Christie "will quickly assess the damage of infrastructure, see how many people are displaced and inspect critical facilities with a view to how quickly life can be restored to some sense of normalcy”.

"NEMA has also mobilised officials to the most significantly impacted areas on New Providence, specifically Marshall Road, Misty Gardens, Pastel Gardens, and other areas along the south and southwestern shores to assess damage and to make recommendations to the government regarding relief, recovery and reconstruction," the statement said.

NEMA's team took supplies like "baby items, canned goods and water" to North Andros during its trip on Saturday.

Meanwhile, as residents of Grand Bahama lost their homes in the storm, some continued to occupy shelters around the island.

"We continually manage a few shelters for those who have been displaced," Mr Cunningham said. "We will seek to bring relief for as long as we can until we can come to a decision about what to do about people in shelters.

Mr Cunningham added that people on the island need drinking water and ice, and said even though the airport in Grand Bahama is closed for the foreseeable future, officials will work to make it available for people coming in with relief supplies so long as they give advanced warning of their intentions.

Harvey Roberts, administrator for East Grand Bahama, also told The Tribune that the island could be without electricity for as much as "six to seven weeks”.

However, he said: "A company out of Tampa brought their trucks already lined up in the harbour to help, so maybe it won't take as long as that."

There is still a call for government to get ice and water and maybe even warm food to persons in the inner city of New Providence. While most of these residents have suffered no major damage from the storm they have been without electricity for over a week. Businesses in these areas who have generators may also consider making outlets for persons to charge their phones and even s microwave or two for them to warm food and baby bottles... Just a suggestion.