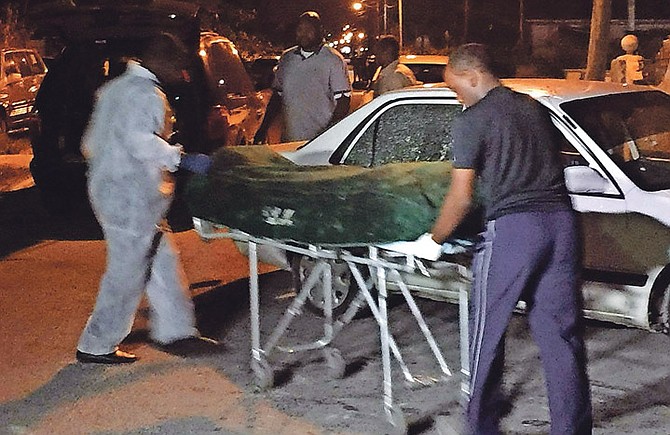 Police remove the body of the victim from the scene.

A MAN was murdered and children injured after three gunmen opened fire on the vehicle they were in on Amos Ferguson Street, off Cordeaux Avenue last night.

Police said five children were in a white Toyota Corolla with the victim when a black car approached and opened fire. It happened at around 7.30pm and marks the 79th murder in the Bahamas for the year, according to The Tribune’s records.

Authorities said they were unsure of how many of the children were injured, with Assistant Commissioner of Police Stephen Dean adding that investigators were also unsure of whether their sustained injuries were the result of gunshots or shattered glass

When The Tribune arrived, police had already cordoned off the scene with yellow crime scene tape in a bid to prevent scores of onlookers from accessing the scene. Some persons of the group could be heard screaming.

“What we can tell you is that shortly after 7.30 tonight a man was driving a white Toyota Corolla vehicle through Amos Ferguson Street,” Mr Dean said. He was accompanied by five children in the vehicle when a black vehicle pulled up on the side of them and opened fire on the vehicle.

“The man was fatally shot. He was the driver of the car. We know that three children were taken to hospital. We are hearing that one or two of them were injured, but we cannot confirm this at the moment. We cannot confirm whether it’s gunshot wounds or from the glass of the vehicle. They are still being examined at the hospital to determine.

“Right now we don’t have a motive for this shooting. Right now we are actively investigating this matter. Right now the detectives are on the ground with uniformed officers they are canvassing the area.”

He added: “We have to make the regular appeal to members of the public who might have been traversing this area no matter how insignificant it seems we want you to contact the police. This matter is of paramount concern to us when innocent children become involved in these shootings and that is something that they should not experience.”

This comes after a man was shot multiple times in the head and killed early Monday morning as he pulled up to a residence in Pinewood Gardens.

The killing happened shortly after 8.30am and brought the country’s murder count to 78 for the year, according to The Tribune’s records.

“When officers arrived, they met the lifeless body of a dark male, lying on the right side of the road,” Supt Greenslade said.

“Information received is that sometime this morning, a silver Skyline came here at Thatch Palm and also a white van was parked on the corer. Once the Skyline parked, occupants of the white van came out, all armed with firearms and approached the vehicle. The driver attempted to flee but he was shot multiple times by the occupants of the vehicle. He collapsed on the side of the road and died,” Supt Greenslade said.

Crooked Christie is about to start blaming any and everything on the aftermath of Hurricane Matthew as his corrupt government seeks to add $150 million more to our existing unsustainable national debt or introduce a special tax that will cause another round of horrific consumer price increases and result in many more businesses having to close their doors thereby increasing unemployment to a dangerously high level. Crooked Christie's failed social and economic policies have already created a grossly mismanaged, very dysfunctional and unsustainable welfare state in which many Bahamians and Haitian-Bahamians have been made dependent on the government for their jobs in exchange for voting the "right way" come general election time. But now even Crooked Christie must face the fact that blood cannot be had from a stone to support his bloated non-productive public sector and the graft and corruption that have unjustly enriched his chosen few. Honest hardworking Bahamians and the vast majority of Bahamian businesses not owned by Crooked Christie's cronies have had all they can take and stomach. We have reached the fork in the road that all honest hardworking Bahamians had hoped and prayed they (and their children) would never arrive at.

One must really be concerned about the sudden increase in the execution style killings. Some occurring even as the country was bracing and even now at the Bahamas struggles to recover from one of the worst storms in recent times. Are these murders related, or are they random. Are they gang related, some being tit for tat? Or are persons using the cover of the storm and the country being in disarray and mostly dark in its aftermath to carry out executions?

I saw this in another social media post...have not verified accuracy or the outcome of guilt or innocence. Could be important...could not be...either way a man is dead that should not be.