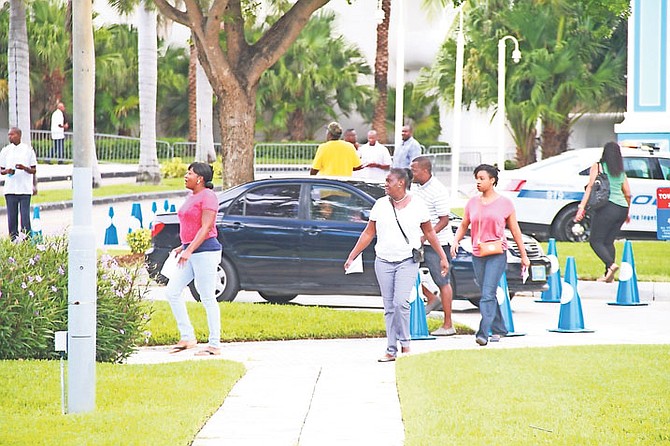 The scene at Baha Mar yesterday as former workers arrived to collect salary they were owed.

WHILE some former employees of Baha Mar yesterday expressed no disappointment in receiving their settlement sums from the beleaguered resort, others complained of the low amount offered as part of the resort’s Claims Committee payout process.

A number of former employees suggested to reporters that they were satisfied with the amounts they had received during the first day of the Claims Committee’s payout exercise at the Crystal Palace Hotel Casino yesterday.

None of the employees questioned by reporters at the site gave any signs of discontent over a potential discrepancy with the amount they received and the amount listed on their termination letters.

However, one former employee who spoke to The Tribune later said while the process “went pretty smooth,” he felt that former employees “should have been paid more”.

The former worker, speaking on condition of anonymity, also said it wasn’t clear what the payout represented, and also that nothing was mentioned about pension payments.

The employee was also angered by a release document employees had to sign to receive their cheques, which said upon receipt of the payout, they would not make a claim against Baha Mar or Perfect Luck Ltd, the special purpose vehicle set up for this exercise.

The employee, who first worked for Baha Mar’s Leadership Development Institute (LDI) and later for the Grand Hyatt Hotel, also said when he sent an email to the Claims Committee about his concerns, he said he was informed that he “should be happy with what I got and that it is on a take it or leave it basis”.

That, he claimed, came after he was told by the Claims Committee last Thursday that he could review his payout letter with a lawyer, but thought it was too short notice to do so.

“How can somebody find a lawyer in that space of time and see if it’s accurate and then you have to go and pick up your cheque?” he said. “(They gave me) about four to five days to find a lawyer.”

“I was distraught by it,” he added. “I (had) been working under a company for the past year or so and I am not obligated to get what is owed to me. One of my aunt’s friends said she heard someone only got $500. Some were expecting more to be able to get a car or go on vacation.”

The former employee added: “I heard the prime minister say this is a gift from the (China EXIM Bank). My whole issue is, it’s like he is saying to us if you don’t take it that’s your business, we are giving you a gift, it’s his way of saying take it or leave it. Election is coming up, so he will say ‘I’ve paid you guys back and created jobs, construction has restarted, now pay me back with another five years.’ I for one will not have it.”

Another former Baha Mar employee, in a Facebook post, criticised the payout process, charging that former employees may be setting themselves up for “most disappointed and unfulfilled promises” by Mr Christie.

Meanwhile, Darren Brown, a former butler for the departed Rosewood Hotel brand, said he had no hiccups during yesterday’s payout process.

“It was very, very smooth and I didn’t expect it to be like this,” he said. “The moment I arrived at the entrance I was directed where to go, and everything flowed really, really smooth. They explained the procedures to you very, very clear, and it was quite easy.”

When asked if he was satisfied with the amount he received, Mr Brown said: “I’m totally comfortable. This was something that didn’t have to happen, you know. And it did. So there is no way you can be disgruntled over getting a gift. All good gifts are from the Creator, and so you receive with graciousness.”

Gavin Cartwright, who was previously engaged in bartending at the resort, also heralded the process.

“It was good, it was quick - quicker than I expected,” he said. “I expected a long line or so, but it was quick. (I was) in and out actually. I was only in there for five minutes.”

Regarding his feelings towards the cheque he received, Mr Cartwright said: “I’m satisfied, I’m not going to lie, I’m satisfied.”

On Sunday, Claims Committee Chairman James Smith advised employees not to worry if payments did not match the amount listed on their redundancy letters. He urged workers with discrepancies to bring in the letter they received from the resort’s human resources department upon their termination as the committee was prepared to deal with any dispute.

However, the Claims Committee has previously responded to queries from Baha Mar’s former Bahamian staff by reminding them that they have little choice but to accept what is on offer this week.

The committee has said that while it is “happy” to discuss their issues, the former employees have “no legal entitlement” to any of the funds the committee is administering. Thus, it said, the offers that are made to them are on “a take it or leave it basis.”

Some were expecting more to be able to get a car or go on vacation.

how much severance or pension could a person get after working ONE YEAR?

now i can see why they say people are being ungrateful.

If it were me, I would say that i am hungry and need the money to catch the bus. they might throw me another bone.

GIVE ME MORE MONEY!!! I AM GOING TO DISNEYLAND.

Bahamar was under construction for over 13 years, they had administrative support staff over that period, then there are the persons who transferred their employment from crystal place so they worked even longer periods.

But I suspect the persons who are happy with their payouts are the ones who weren't there that long so weren't due much anyway.

You need to go check your facts before you open ya mouth. . .those hotels were open while construction of the big building was in progress. . .

When asked if he was satisfied with the amount he received, Mr Brown said: “I’m totally comfortable. This was something that didn’t have to happen, you know. And it did. So there is no way you can be disgruntled over getting a gift. All good gifts are from the Creator, and so you receive with graciousness.”

What you talkin bout negro! Something that didnt have to happen? Jahman, you forget you work for your money aye? This gatta be some real slave conditioning jed. When you put a people in a state of despiration, ANYTHING you give them they will be satisfied. I understand people struggling and the little what you gat is more than you had yesterday, but dont just receive it graciously and then say its a gift from God. God dont give you crumbs jahman, he give you things like the EARTH to live off, and AIR to breathe, Sight to see, a functioning brain for you to make choices an most importantly, LIFE!...........dont compare crumbs to that bro!

Sheeprunner12. These payment amounts might not ever be revealed. Here we have many cases of desperate co-workers who are very much ashamed of the amounts given to ever come out in public. A government crying shame. While they live off the fat of the land,our people continue to suffer!

I guess this is a good sign for the foreign investors - if you run into any trouble, run your business into the ground, or purposely sabotage a project you can always rely on the PLP to bail your ass out even if they have to act contrary to the laws they'll just make a Special Purpose Vehicle and drive right the F**K around the law for you!!!

Bahamians are so easily duped. These people run that bullshit about "no" legal entitlement, then give you couple of dollars that you are "owed" then tell santa has come early. This government should pay a heeavy price for the shit they have done to us over the past 4-1/2 years.

Like the Chinese,beware of strangers bearing gifts. When its seems too good to be true,maybe it is. Sad to know how people take advantage of such desperate people, with such desperate financial situation. And then turn 90% around and make themselves seem so genuine. The real heart of stone tactic!

Every Bahamian who went up there to received "the gift", and signed away their rights need to shut up including the person speaking on condition of anonymity. You can't blame the PLP or any politician- if you don't demand better from them. Those expecting enough to buy a car or go on vacation- must be doing well because those are not things any right minded, fiscally responsible person would be spending money on right now.

They cannot sign away their rights. . .no contract that is contrary to law can be legally binding. . .those people can take "their" money given in this exercise and sue for the rest entitled by law. . .

No transparency at all in what happened with these payments. You can be rest assured Jimmy Mosko, Allyson Maynard-Gibson, The Whitehead Family, and many others like them got from James Smith the lion's share of the total cash amount the Chinese Export-Import Bank turned over to the corrupt Christie-led PLP government in exchange for outrageously generous and onerous additional concessions heaved by Christie on to the backs of honest hard working Bahamian taxpayers. My God, this monsterously evil and cruel Christie has no shame whatsoever!

“I was distraught by it,” he added. “I (had) been working under a company for the past year or so and I am not obligated to get what is owed to me. One of my aunt’s friends said she heard someone only got $500. Some were expecting more to be able to get a car or go on vacation.”

Out of a job, just got a small severance and had he gotten more he'd go on vacation. Yep, das just how my people think. Instead of saving every penny to put food on the table until you can find another job, you want to go on vacation or buy car.

Das we Bahamians......livin' in the moment, livin' for today.......we'll worry about tomorrow when tomorrow comes!

Government and the Chinese taking advantage of the desperation of these people. Pathetic. Yet those same people will vote these idiots back in.

Could this be V.A.T. Bahamian funds to insure the New Buyer that the transfer of ownership will be free of any and all Liens for work completed prior to signing any documents to take ownership and responsibility for this property. To date there is no evidence that these funds came from the current owner of this property.