Mccartney Urges Dna It's Time To End 'Business As Usual' 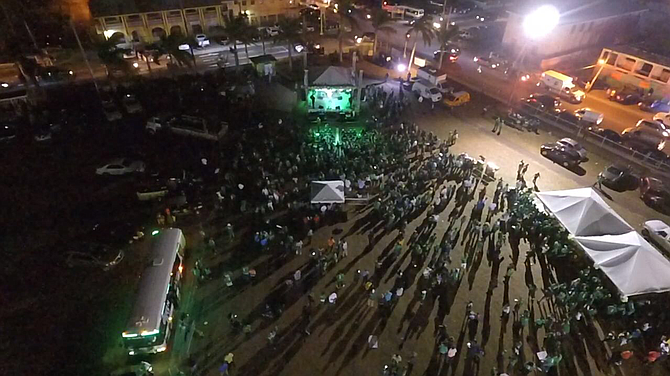 HITTING back at recent assertions by Free National Movement (FNM) officials that a vote for the Democratic National Alliance (DNA) is a vote for the Progressive Liberal Party (PLP), DNA Leader Branville McCartney on Friday claimed that the FNM’s attempts at alienating the third party is because the FNM wants either itself or the PLP to win “because they work together”.

Addressing a modest crowd of supporters at the DNA’s first campaign rally at Windsor Park on Friday night, Mr McCartney employed the ‘two sides of the same coin’ argument to characterise the alleged symbiotic relationship that exists between the FNM and the PLP, as he charged that both parties “have businesses together” and “lend money to each other”.

In particular, Mr McCartney said FNM Leader Dr Hubert Minnis “must stop his foolishness” in making such insinuations about the DNA, further suggesting that such assertions are hypocritical because “he knows at the end of the day how close he is with the PLP”.

Mr McCartney also said Dr Minnis “can’t talk” about wanting Mr Christie to fire Education Minister Jerome Fitzgerald for allegedly “corruptly” using his position of power as a Cabinet minister, claiming that both the PLP and the FNM “do the same thing” and are “the same people”.

On Thursday, former FNM leader Tommy Turnquest, who unsuccessfully lead the FNM into the 2002 general election, warned undecided voters not to be swayed by both the PLP and the DNA in the weeks leading up to the general election on May 10, stating that the FNM cannot allow the DNA to “take our voters from us” a second time.

At the time, Mr Turnquest said the FNM underestimated the DNA before the last general election, a move he insisted “was a major reason for our defeat in 2012”.

“As our leader told you, if you go to bed with the DNA, you are going to wake up with (Prime Minister) Perry Christie and the PLP,” Mr Turnquest said at Thursday’s rally, likely referring to Dr Minnis’ statements in March when he stressed that the election would be between the FNM and the PLP only.

In response, Mr McCartney seemingly hit out at Dr Minnis' hypocrisy for calling on Mr Christie to fire Mr Fitzgerald, along with Attorney General Allyson Maynard-Gibson, for allegedly failing to separate their private affairs from their public duties in negotiating the Baha Mar remobilisation deal.

He then went on to deride the allegedly collusive relationship between the FNM and the PLP.

“I hear one leader of one of them parties want another minister to resign for conflict of interest and all that stuff,” Mr McCartney said on Friday night. “But he can’t talk. They do the same thing. They’re the same people. They work together. They got businesses together.

Mr McCartney encouraged DNA supporters to end the “status quo” and break away from the FNM-PLP cycle that has come to define Bahamian general elections, as he said “times are far too serious for it to be business as usual”.

“You been down the road before with the PLP and the FNM. Over 25 years you’ve had 15 years of the FNM and 10 years of the PLP. How you think we get in this mess? It wasn’t the DNA.”

The night saw speeches from a number of other DNA candidates, such as Englerston candidate Stephanie Lightbourne, who urged Bahamians not to be distracted by the novelty and fanfare of political rallies, as well as Bain and Grants Town candidate Brenda Harris, who highlighted the DNA’s plan to raise the minimum wage to $250 per week.

Mr McCartney ended the night by promising that, if elected to office, the DNA would enforce the death penalty, as well as decriminalise marijuana. Mr McCartney also said the DNA would seek to introduce anti-corruption legislation and an amendment to the Constitution by way of referendum to allow the creation of a recall system for “non-performing members of Parliament”.

“The Bahamian economy is at an all-time low, highlighted by non existent growth, high levels of public and private debt, high unemployment, and gross asymmetry of wealth,” he said of the country’s state of affairs. “The middle class has been destroyed, and the poor have been disseminated. We are quickly becoming the ‘have’s’ and the ‘have not’s’.”

“The Bahamian dream has now become a Bahamian nightmare,” he added.

Bran's pathetic attempts to the contrary, any good conspiracy theorist would posit that it is the DNA, not the FNM that is working hand in glove with the PLP. The DNA is unlikely to win even one seat, yet Bran trudges on, accomplishing little but making more and more likely the election of a thoroughly unpopular, corrupt government.

Is the only viable explanation an ego so out-sized as to defy description? Maybe there is something more sinister involved.

Comrade Tribune Reporter Nico, got a little carried away in upgrading the DNA's teeny-weeny crowd to a modest crowd of supporters at the DNA’s first campaign rally at Windsor Park.

All the PLP has to run on is how bad a leader Minnis is.

All the FNM has to run on is how bad the PLP is.

And all the DNA has to run on is how bad the PLP AND THE FNM are....

This is the worst election this country has ever had. A choice between bad, bad and bad. Not one single viable choice.

I am proud to be sitting this election out. I really don't give a rat a_ _ who wins.

No matter who wins we will lose.

Yes, no matter who is the next PM we, the Bahamian people, lose. But we stand to lose a whole helluva lot more than we would otherwise if Minnis should ever be allowed to become PM!

A vote for the DNA is a vote for.....the DNA. The FNM has been around since 1972/73 (44 Years). So how can a party that just arrived five years ago pose such a threat? FNM should be so established that they need not fear any votes that the DNA may receive. So this suggests that you do not have confidence in your ability and your base support and is now looking to place the blame on the DNA for any losses you may incur.

hallmark, in 2012 the DNA split the vote for those who would likely have otherwise voted for the FNM, thus allowing the PLP to win the election NOT on the majority of votes, but because the vote was split by those voting DNA. This is why a vote for the DNA is a vote for the PLP..

The only question you need ask yourself is if you want another 5 years of the PLP. If the answer is "yes", then you know what to do. If it's "no", then you have to vote FNM -- no matter how galling the option may be, but it has to be a better option than the one we've been suffering under since 2012. Empty broken promises with lots of unaccounted for money...your choice!

Wow! Big turnout! Must be 52 people there!

Comrades Groidal, this DNA missing crowd photo is reality crueller than anything we could have imagined. Reportedly there was never an issue bout the 52 crowd turnout noise disturbing the peace the neighbourhood?
This is what happens after ya political career has been "torched" by Long Island's "Reheasa."

So why are persons so concerned about someone who only has 52 followers? That small number surely won't affect the outcome for the two great parties who are not allowed to lose.

Comrades it's not that the DNA as an alliance of sorts is appealing to the youth voters, but the 52 will be the "parents" of today's voting young people.
You see essentially - it's the 52 parents of today's youth voters - who will be throwing away their 52 votes - if they vote for the DNA.
Bran's DNA alliance is not a legitimate enough of an excuse for the youth vote to suppor the DNA as a third-party - at least not on May 10, 2017.

Decriminalize marijuana? That platform promise by the DNA should not be taken lightly by the Bahamian electorate. Here's why:

"First, there’s an important difference between legalization and decriminalization.

Often, activists garner support for a change in marijuana policy by talking in terms of decriminalization. For example, they suggest that no criminal penalties (jail, fines) should be imposed on an adult possessing a small amount of the drug.

But most of the time what people are actually voting on is the legalization of the drug, where marijuana is authorized, legally sanctioned, and “endorsed” by the state.

This move results in a commercial industry taking root in our communities. ..." -- Jim Daly, President of Focus On the Family

Play it forward. Decriminalization of marijuana would eventually lead to the legalization of the same. But read about some of the devastating effects of the drug's usage since it was legalized in Colorado a few years ago and ask yourself, "Would this be a good thing for Bahamians?" While you ponder that, I urge you to read the rest of Jim Daly's blog, "Six Surprising Ways Marijuana Is Hurting Your Family" - http://jimdaly.focusonthefamily.com/s...">http://jimdaly.focusonthefamily.com/s...

I wonder if Terel W Carey, the guy who took the pic, has a licence to fly the drone -- with all of the new drone legislation and all that.

I have a software program that counts things in pictures. I ran that pic through the app, and guess what -- the software says that there are at least 414 people in the pic, including the guys in the street and across the street (and it missed some people in the bottom right, but that could be my fault, because you have to draw around the area that you want counted). See attached photo. It puts a yellow dot on everything that it thinks is a person.

I am gobsmacked that they got over 400 people. Are those the booze tents on the right?

Comrade Banker, you're not taking into account the DNA possibly could have borrowed 348 male and female mannequins from their clothing store business operators friends.
Don't you remember when the green party actually hired, bused-in and fed protestors- all for a previous fake news show of supporters for the media cameras?

Not sure about mannequins, but booze tents perhaps. I was amazed at how effective a booze tent was when I saw the conchy joe Elizabeth representative who never comes to sit in Parliament, use it (and the fights that happened around it requiring police intervention that never made it to the press). Free booze is a powerful draw for the marginalised and disenchanted. I understand that you are a booze aficionado yourself. It is the cause of and the solution to all of Life's problems according to Comrade Homer.

Comrade Banker, believe me, I does try saying NO to my indulging in early morning Crown Royal Whisky... but it's proven be 90% more proof than is the Comrade.

Have you tried Crown Royal Black yet? Best by far.