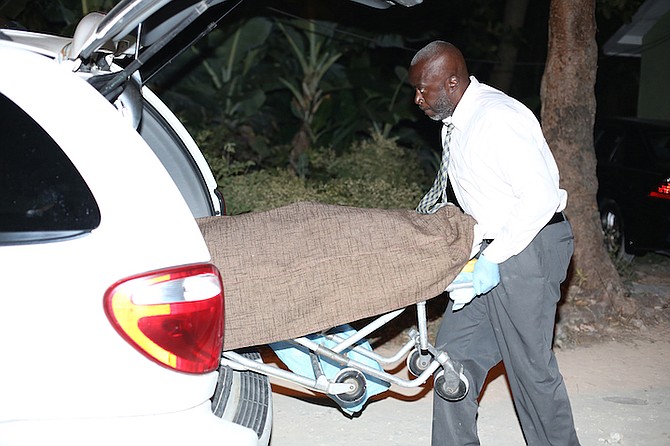 The body of the dead man is removed from the scene in Knowles Drive on Saturday night. Photo: Terrel W Carey/The Tribune

POLICE in New Providence report that a man has been shot at a home off Tonique Williams-Darling Highway on Saturday night, the fourth murder in the capital since Thursday morning.

Police are seeking the public’s help in solving the crime, which occurred shortly after 10pm, when officers received a report that a man was shot in front of a home on Knowles Drive, off Tonique Williams-Darling Highway. When they arrived on the scene they found the lifeless body of an adult male who had been shot. The victim was pronounced dead at the scene.

It was the third murder in the capital in 30 hours and takes the murder total for 2017 to 48 according to The Tribune's records.

Police are also searching for two men responsible for a shooting incident that has left a man dead on Friday night. According to reports, shortly after 10pm, a man was driving his vehicle in the area of Bola Alley and Augusta Street, when two men with handguns approached and fired several shots at him before fleeing on foot.

The victim was pronounced dead at the scene near Kirkie Bar.

Three suspects were also taken into custody on Friday afternoon after a shooting incident on Market Street left one man dead and another seriously injured.

According to reports, shortly after 4pm, a group of men were standing in front of a car wash near Palm Tree Avenue, when the occupants of a dark coloured vehicle pulled up and fired several shots at them before speeding off.

Two of the men were shot and transported to hospital, where one of them succumbed to his injuries. The other is said to be in a serious condition.

Mobile Division officers spotted the getaway vehicle fleeing the area. After a search ending in Ridgeland Park, three suspects fled the area on foot before being captured. A Tech 9 automatic firearm and a .40 pistol, along with several rounds of ammunition, were recovered from the men.

On Thursday a minibus driver was shot in the downtown area of Nassau after being chased by his killers, police said. The man, identified by friends as Hans Neely, was a transportation supervisor at Stuart Cove’s and was driving a bus while being chased.

When he reached the downtown area around 7am, the suspects pulled in front of him and fired shots at him, police said. The shooting occurred at East Street north, near Prince George Wharf, an area that is usually populated by tourists, cruise ship passengers and downtown shoppers.

who changed the bail act?

So now we know the definition of a crime of aggression, as defined in the Charter of the United Nations, but how is that relative to this article, or to the Bahamas in general?

That is exactly what I was wondering.