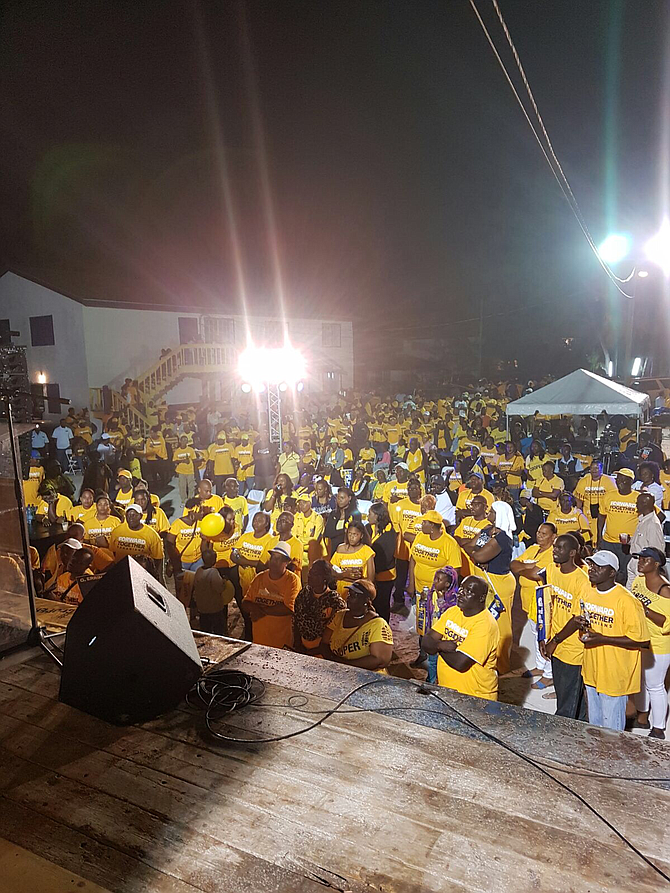 AS he continued his silence on the controversies involving several members of his administration, Prime Minister Perry Christie singled out Education Minister Jerome Fitzgerald for praise last night, commending him for his performance this term.

And in what seemed like the closest he came to referencing the controversies surrounding his government, Mr Christie also railed against “lies” and “fake news,” though he never specified what he was referring to.

“The FNM will say all sorts of bad things about us,” he said. “They will tell fake news about us, but we are protected by the shield of faith against the lies, against the fake news. We will be strong.

“There will be no room for anyone who wants to compromise, subvert or change the course of what we are doing.”

Mr Christie did not address the controversy surrounding The Tribune’s revelation that Mr Fitzgerald solicited contracts from Baha Mar developer Sarkis Izmirlian while he sat in Cabinet and later became one of the lead negotiators to remobilise the property.

Although Mr Christie told The Tribune this week that he doesn’t “run from any issue,” it remains unclear if he plans to address the controversy that has dominated headlines in the past week.

For his part, Mr Fitzgerald was one of the two Cabinet ministers who travelled to Andros with Mr Christie and attended the rally.

Declaring “Marathon on lock,” Mr Fitzgerald mentioned Baha Mar, saying he encountered a resident yesterday who is employed at the resort and who is a traditional Free National Movement supporter but will vote for the PLP out of concern for FNM Leader Dr Hubert Minnis’ pledge to execute a “real sale” of the resort if his party wins the election.

“We walk by faith and not by sight,” Mr Fitzgerald said. “Every day they coming after Marathon but they can’t have it.”

Last night, Mr Christie also pitched the May 10 election as a choice between “going forward” as a country with the FNM.

He spoke for more than 30 minutes during the rally that was attended by several hundred residents of the island.

Without providing specifics, he revealed that Cabinet will have a special meeting today to examine agreements that he said could provide a big boom for Grand Bahama.

“We will continue with a major plan for Andros,” he said, adding that his government will integrate the Bahamas Agricultural & Marine Science Institute (BAMSI) into the University of the Bahamas and cause “hundreds more jobs” to be created.

“There will be major developments to have,” he said.

Painting Dr Minnis as incapable of keeping his party together, he said the Killarney incumbent has “ran back to Brent Symonette.”

“I can’t image you electing a party who cannot stay together where the people of that party say all kinds of things about that leader,” Mr Christie said.

Lest we forget Christie also singled out for praise Paul McWeeney, ex-managing director of Bank of The Bahamas (BoB), and arranged for him to receive a $750,000 severance bonus. McWeeney was Christie's puppet at BoB who oversaw the making of millions and millions of dollars of bad loans and bad advances to Christie's cronies resulting in the need for BoB to receive millions and millions of dollars in bailout money from taxpayers and national insurance contributors. Meanwhile the ordinary shareholders in BoB, effectively including the taxpayers, national insurance contributors and individual investors, have all watched the value of their shareholdings go up in smoke! Christie undoubtedly is the very embodiment of everything evil in our country today!

You're right about Christie, but an ever increasing number of us realize that Minnis as PM would be (as you have posted out time and time again) a Christie on steroids gone mad!

BOL!!! You really should stop antagonizing them.

Comrades! You might not be into Bran's, brand green DNA spoiler politics, but make no bones about it, Bran's brand politics is very interested in "stopping" the Red Party from forming a minority government on the morning after May 10, 2017.

Meaning Green would form a coalition with Plunder Loot Pillage???

Comrade DDK, don't you think them specially laced brownies, should only be we common Comrades - go all funny?

Sometimes you lose me through that haze.

The sip sip is the PLP funded the DNA in 2012. They are the best thing that ever happened as far as the PLP is concerned,

The P.M. needs to lay off the Sea Grape dye, it clearly is affecting his judgement.

Mr Christie Referenced Mr Fitzgerald, As Being A Part Of The Sir Lynden Pindling Dream

He should be the very first locked up for setting the Bahamas on course to massive corruption and failure!

If the truth be told, Andros has always been the island with the blindest of followers. This is the exact reason why cotton candy Christie decided to load of his bullshit here. I am beginning to wonder if the jackasses who live there listen to the news or are even aware of what's going on in their own country. I am sooo ashamed to say that I was born on Mangrove Cay, Andros. I don't know if it's the sea grapes or the water that keep the people so dumb, but they keep supporting the one party that has done absolutely nothing for them...Amazing!!!

My God, why are you throwing the "crab people" under the bus like this??????

Oh the crab! So that's the connection to the PLP...Never thought of that one