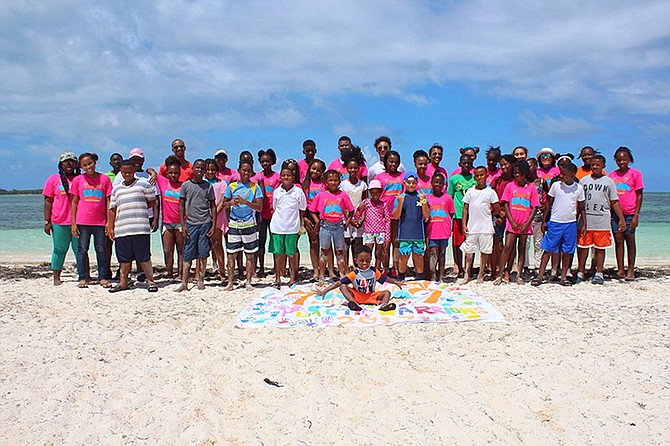 Kids learned about plastic pollution and helped clean up the island of Eleuthera during the BPM Summer Camp.

WITH a vision of making the country a plastic-free environment, the Bahamas Plastic Movement hosted its fourth annual summer camp in which 30 students discovered a new-found appreciation and understanding of the cause.

For an entire week, the Plastic Pollution Education and Ocean Conservation Camp was held at the Eleuthera Arts and Cultural Centre in Tarpum Bay. Students at the camp applied what they learned about plastic pollution through art, scientific research, political advocacy, lifestyle changes and business engagement.

She explained that during the scientific research track, six groups of campers collected 2,000 pieces of trash from around the local library, park, dock, alleys and roads, such as Lord Street, in under 40 minutes. After calculations, they found that 77.2 per cent of the debris collected was made of plastic.

"The intention of this data is to have statistics that apply to the place we live, and support that the issue of plastic pollution threatens this small island nation. Since plastic can never fully degrade, fish mistake it for their food and ingest it. As plastic works its way up the food chain, humans consume the plastic polluted fish, introducing plastic into our bodies. Wildlife can get entangled in this so called miracle product, hindering them from taking precautionary measures of survival," said Kristal.

Highlights of the BPM Summer Camp also included a mural presentation, a call to action video presentation, a segment where campers learned how to make their own toothpaste and body scrubs. And using old T-Shirts, the students created reusable bags in a effort to replace grocery store plastic bags.

"Another group of Plastic Warriors grabbed some 'Plastic Free July 'posters and travelled to five local businesses and successfully persuaded them to agree to join the campaign. For the month of July, partnering business have pledged to serve straws only upon request rather than giving them out with every beverage they sell," said Kristal.

The week concluded with an expo where parents were invited to view the camp's mural, the call to action video, receive information on the camp and enjoy skits and music performances around the topic of plastic pollution solutions.

"Twenty-five per cent of the world's population is comprised of youth, but they are 100 per cent of the future. These Plastic Warriors have what it takes to be the change this country's needs when it comes to our plastic habits," said Kristal.