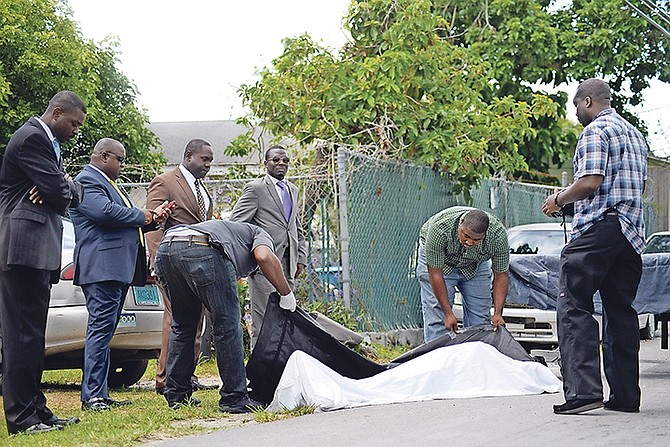 The body of the young man who was murdered yesterday in Fox Hill is removed from the scene. Photo: Shawn Hanna

He warned criminals to cease breaking the law or face “the stiffest law enforcement resistance.”

Acting Commissioner Ferguson said every homicide recorded sends “shock waves” across the country and should be addressed in kind. However he sidestepped questions about the actual homicide count for the year thus far.

“So, I try not to worry about the (homicide) count,” he told reporters summoned to police headquarters for a press conference in response to the spate of homicides, including one that occurred Tuesday morning.

Tuesday’s homicide, which occurred in the Armbrister Street section of Fox Hill around 10.45am, marked the ninth homicide in the past two weeks.

Addressing these homicides, Acting Commissioner Ferguson stated: “While other crimes continue to trend down, we recognise that the killing of a human being by another human being sends shock waves throughout the island, especially when the circumstances is criminally motivated.”

He continued: “There’s been a total of nine killings within sections of New Providence over the past two weeks.”

Despite this alarming fact, however, Acting Commissioner Ferguson moved to quell public concerns, warning that these killings are “predominately restricted (to) a small group of persons,” most of whom he insisted are involved in a life of crime.

He said: “Police have identified most of them. Some of whom have already been charged with murder before.

“In an effort to further ensure a safer Bahamas, we have embarked upon an aggressive approach to prevent and bring to justice those persons who believe that they can’t be caught.

“The public can be assured of high visibility of police presence in the communities going forward, as of today.

“I now speak directly to the criminal element, that as of today, you must discontinue your criminal behaviour because you will be met with the stiffest law enforcement resistance.

Tuesday’s murder was the third fatal shooting in the eastern district of New Providence over the last month. Police are working to determine if these killings are connected.

“I can assure you that based on the intelligence that we have gathered so far, particularly as it relates to this matter this morning, our detectives are doing some things as we speak,” he added.

Police have said they want to speak with a man named Deon “Hatchet” Demeritte for help in their investigation into the Armbrister Street homicide.

Also, Acting Commissioner Ferguson revealed plans to roll out several new initiatives later this week. He suggested these new initiatives will revolve around increased police visibility and communication with communities where crime is prevalent.

“You can expect to see increased visibility. We have the visibility now, but we will continue to increase that to be able to reduce the criminal element from running up and down the street and we want the public to assist us in providing information on that,” he said.

“What people have to understand, policing is a partnership. All of us are from different communities and if you want to make your community safe, members of the public are urged to continue to support police and provide information.

“Again, you don’t have to give your name, all you have to do is provide the information and we will find the way of presenting the evidence excluding you from having to stand in front of the criminal element.

Acting Commissioner Ferguson also sidestepped questions over the status of Police Commissioner Ellison Greenslade, who has been out of the public spotlight since reports indicated that he was offered the post of high commissioner to London.

The Tribune understands that Acting Commissioner Ferguson, who is deputy commissioner of the force, would assume the post of commissioner.

Seems like it's going to be 'more of the same.' With the high incidence of murders in the past ten days does Ferguson really believe that he can talk away murder or even serious crime. Apparently when persons reach the point that they will arm themselves and go in hunt of another human being and gun him down, sometimes even under the high noon sun, neither life nor death matters to him anymore. And in most instances these people view themselves not as murderers or cold blooded killers but as soldiers gone to war. Kill or be killed. Super predators who also assume they are being preyed on. And if intervention does not come long before they reach that stage the police will continue to perl off yellow tape and bodies scooped up of the ground. The job of fixing the problem is just not for the police alone.