‘It’S More Dangerous In The Bahamas’ 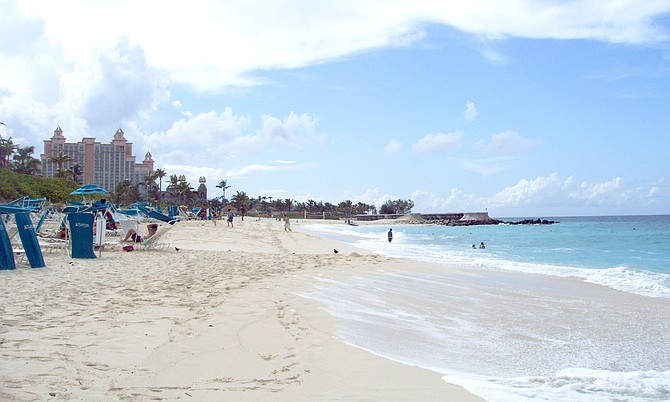 Cabbage Beach is a popular destination for visitors - but an international travel site has warned that The Bahamas is a dangerous place for unaccompanied women to visit.

AN international travel site has listed The Bahamas as the sixth out of ten most dangerous places for unaccompanied women travellers to visit.

Trip.com, in a recent survey, listed The Bahamas just behind Peru and ahead of Colombia on its “Least Safe Countries for Solo Female Travellers”.

The survey noted while women travellers reported “no issues” and encountered “very friendly people” in The Bahamas, it is “better” for them to “stay in populated areas”.

The survey was conducted by Trip.com’s Solo Female Travel Team. The story was picked up by popular international business magazine Forbes and published on its website Forbes.com.

The Forbes report, however, also used information from a recent US State Department warning over New Providence’s crime rate.

In that report, the US State Department lists the criminal threat level for New Providence as “critical,” while also acknowledging an increase in criminal activity in Grand Bahama “this past year”.

The report on travel.state.gov also notes the presence of criminal activity on the Family Islands, albeit stating that they occur “to a much lesser degree than on New Providence or Grand Bahama”.

Armed robbery and sexual assault are “major criminal threats” facing US citizens in New Providence, the report said. It also said the US Embassy has received “multiple” reports of tourists being robbed at gunpoint or knifepoint in tourist locations in downtown Nassau.

Several of those incidents occurred “during daylight hours,” according to the report.

Attempts to reach both Tourism Minister Dionisio D’Aguilar and National Security Minister Marvin Dames for comment on the issue were unsuccessful up to press time.

Nonetheless, in March, the Bureau of Diplomatic Security’s Bahamas 2017 Crime and Safety Report classified New Providence as being a “critical” threat location for crime either directed at or affecting official US government interests.

Among other things, the US State Department said areas of Nassau referred to as “Over-the-Hill” should be avoided.

According to that report, despite 2016 experiencing a 26 per cent drop in serious crimes and 24 per cent fewer murders than 2015’s record high, New Providence has witnessed violent crimes in locations more commonly frequented by US tourists.

In some instances, these incidents resulted in fatalities, the report said. There were 111 murders in 2016 and 146 murders in 2015.

The report also noted that criminality and violent crime has increased in Grand Bahama, notably crimes involving the use of machetes.

Generally, the report said the Royal Bahamas Police Force (RBPF) is receptive to reports of crime and takes threats of crimes against tourists seriously.

However, the report said timely police response can be reduced by a “lack of resources” or by the “physical constraints imposed by geography, infrastructure, and traffic.”

“To ensure quick response to a residence, victims may have to go to the local police station and provide transportation to the site.”

Last month, responding to a controversial video circulating on social media encouraging prospective visitors to avoid New Providence to preserve their own safety, Mr D’Aguilar said his ministry will “redouble” its marketing efforts to counter the “false information” contained in the video.

Still, Mr D’Aguilar admitted that New Providence “is not something that we should be proud of,” adding he is “unimpressed” with the experience cruise visitors have when they arrive at the Port of Nassau. Mr D’Aguilar, in regretting the current state of affairs in New Providence, stressed that “our tourist product needs some work”.

"Mr D’Aguilar, in regretting the current state of affairs in New Providence, stressed that “our tourist product needs some work”. " IS THAT IT? Very profound and insightful. Tourism needs to get with it. The country is in deep doo-doo.

While the crime in Nassau DESPERATELY needs controlling, I strongly believe that the US has ulterior motives for its labeling. I think rating as 6th out of 10 most dangerous place is HIGHLY political (and I'm talking- American politics). I think part of it is to stop Americans from spending so much money in a destination that is so conveniently close to the US.

It's to stop americans from spending money in a Chinese protectorate country. Can't really blame them.

Either way, they definitely are control freaks.

The Bahamas is dangerous for women ............. regardless of where they are from That is a serious indictment on the males of this country ........ Taliban-like mentality

The Bahamas is more dangerous than Colombia. Wow!!! Who would have ever thought?? What an embarrassment!

Solo white female standing on a street corner in South Chicago at midday. Chances of getting robbed or much worse: 100%. Same in "Over-the-Hill": much, much less.

Probably quite true ..... But solo women are increasingly being targeted by young men in this country as robbery or sexual victims ...... Not good

Considering we do probably a million US tourist a year ,perhaps 300,000 are single women .I don,t think 300,000 innocent tourist ,white or black ,stand on a corner in south Chicago waiting to be robbed/raped .And if they white hard core druggies they are street smart .Considering tourism is our business not slinging hard drugs ,,taking them on a jet ski to Atoll island and raping them is not what they bargained for ,,even near the drug dens the dope boys protect their customers in Chicago ,,can,t we protect ours .

want to know another interesting fact? I am comparing the entirety of the Bahamas to 1 US city. If we go City to City as in Nassau to Chicago, we are even worse than Chicago by flipping long shot. I haven't even included other violent crimes... in which would DOUBLE the rates present in that of Chicago.

Get your head out of your ass.

There has always been safety in numbers. It doesn't matter where you are. A woman may be more vulnerable alone, but if you want to travel alone. Do it! Watch your back just like do at midnight at home and you happen to be out and about. There is a lot of crime in this world but there is a lot of good people too. You'll miss a lot if you let fear stop you from living your life. I'll be there soon and I'll be alone.

I would respectly suggest that you not travel alone, "over the hill" at 3.00 in the morning---Good luck

Is it safe "over the hill" if your with a Bahamian or is it not safe to be out at night alone?

Hi, I'm back. I've been in California alone for a couple of weeks. lol

I consider this a continual economic embargo against young, Black enterprising Bahamians who are willing to put in long hours in the hot sun to earn a living. nothing else. Of the 6 million tourists that visit the Bahamas less than 10 women are reported assaulted in any given year. In one single incident on a beach in South FloridaElevenpeople were shot. And Miami Beach is considering banning the sale of alcohol after 10:00 p.m because of rowdy and loud and fighting visitors. It is time for the bahamas to take it for what it is: they don't want locals working on the beaches or interacting with tourists. They want to equip them with guns and drugs and encourage them to fight among themselves and kill one another. #superpredators...A former president called them goods damaged beyond repair. This government needs to get itself together and go out there and save our young men. Stop being driven by foreign opinion that is (always) Anti-Bahamian and laden with ulterior motives. What now? they want you to bring in foreigners to run the jet skis and beach activities? What about the young woman who walked into a phone store yesterday with a double barrel shot gun (USA) and demanded cell phones? hardly made the news did it?

of the six million 4 and 3/4 million are cruise passengers ,,,numbers don,t lie our murder rate is like a war zone and eight times as high as the US

We all know the crime rate is high in New Providence. What would you do if you have a friend that you really value and they live there. How do you find them? I'm not one to give up. It breaks my heart to think I will not see him again.

I will be the first to admit our faults and we definitely have a huge problem with crime, but ranking us 6th in the world for "unaccompanied women travelers" doesn't sound right. Here's the list:

What about Syria? Somalia? Libya? Those countries are more dangerous regardless of whether you are a man or a woman, which leads me to main issue I have with the article. Much of the data it uses to back up its assertions are based on general crime statistics, including crimes that have nothing to do with visitors or women specifically. They aren't backing up their assertions with relevant data. What they are basically saying is the equivalent to "Because the Bahamas has a high murder rate, unaccompanied women travelers should watch out". That's shabby journalism. Also, why does the article say "paces" then go on to only list countries. It's click-bait.

I do agree that Nassau is not a safe place for unaccompanied tourist women, but 6th most dangerous in the world??? Come on now.

I wonder what ulterior motive John thinks Forbes Magazine could have? More likely the reporting is correct and Nassau is not a safe destination for women travelling alone.

The girls are quickly following in the jungalist mindset as well ....... tattoos have become the new jewelry for this generation ........ That is why this millennial generation is treading a dangerous path

I guess I'll settle in Grand Bahama eventually or a out Island. It sounds like you live in fear in Nassau and that's not good.

I want close friends and a family life wherever I live.

Thanks for the advice, but well I'm not ready to do that!