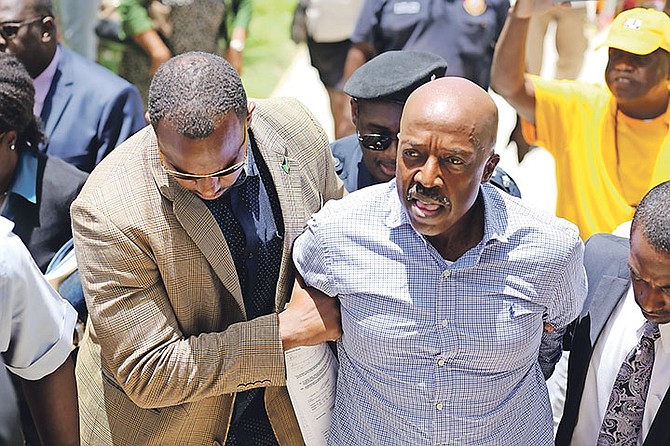 FORMER Labour and National Insurance Minister Shane Gibson was granted $40,000 bail with two sureties in the Supreme Court yesterday afternoon, less than one hour after he was arraigned in Magistrate’s Court on 36 bribery and extortion related charges.

It is alleged that Gibson solicited some $250,000 in bribes.

The former Golden Gates MP was greeted by chants of “PLP all the way” from a crowd of supporters as he limped while handcuffed towards the Nassau and South Streets court complex.

Officers assisted him as he hopped up the steps.

Gibson, dressed in white pants and blue checkered shirt, had a noticeable leg injury his attorney said was caused by a boating accident prior to his arrest on Wednesday.

He did not have crutches when he headed into Magistrate’s Court to be arraigned, but was later seen using the walking aides while at the Supreme Court for his bail hearing.

A short time later, Supreme Court Justice Cheryl Grant Bethel heard the bail application and did not impose any travel restrictions on Gibson. He was also not required to surrender his travel documents or check in to any police station.

After Gibson’s bail hearing, Mr Munroe said he will return to court in September for a constitutional challenge to the Bail Act.

“It did not start out as a bail application, we are challenging the constitutionality of Section 4 3A of the Bail Act which removes the jurisdiction of magistrates to grant bail in these circumstances, in my view, it’s long overdue, it has not come to pass and the date for that for mention is set in September and we will set a date for that motion,” he told reporters.

Gibson’s bail was granted with two sureties on the condition he does not reoffend and attends his trial.

Gibson’s matter was adjourned until October 3 but he will return to court on September 19 for a status hearing.