Bank Of The Bahamas Bailout To Be Debated By Parliament 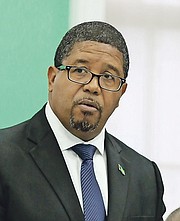 DEPUTY Prime Minister and Minister of Finance K Peter Turnquest yesterday pledged the government’s planned $166m “rescue” for Bank of The Bahamas will be fully debated in Parliament.

Mr Turnquest acknowledged that a second “bail out” for the beleaguered bank “tests the patience and confidence of the public”, but ultimately defended the move as the government’s duty to act in the best interest of its shareholders and the industry.

“We intend to go to Parliament to have the rescue fully debated which should have been done with the prior deal,” he told The Tribune in an interview yesterday.

He also committed himself to disclosing the details surrounding the first Bahamas Resolve transaction, telling The Tribune “to the extent that we can, I will”.

“We fully appreciate that the public’s patience and confidence has been tested with this second effort,” Mr Turnquest said, “but we believe that the bank, operated without political interference and free of a book of bad loans that should have been addressed years ago, will pay off in the medium term.

“The government of The Bahamas as the majority shareholder has an obligation to its depositors and minority shareholders to act in their best interest as well as the industry. We are confident that the action taken to secure the bank’s path to profitability and return of shareholder value is the best option available.”

He continued: “We are likewise confident in the newly elected board of directors and their plan to restructure and strengthen the bank’s governance and market position.”

Resolve is a state-owned and controlled company that was established in October 2014 to assume liability for $100m of BOB’s non-performing commercial loans.

The “bail out” came under scrutiny on the general election campaign trail earlier this year after former Prime Minister Hubert Ingraham questioned how the deal was authorised without the approval of Parliament.

In early February, then Prime Minister Perry Christie said his administration would soon make a full disclosure on the current affairs of BOB and Resolve Bahamas. However, no such disclosure was made.

According to Tribune Business, the new “bail out” is essentially a repeat of the first Bahamas Resolve transaction, although the sums involved are much higher.

The latest rescue will remove some $166m worth of “toxic” commercial loans from BOB’s balance sheet and transfer them to the Bahamas Resolve special purpose vehicle (SPV).

The loans, which are to be paid for at gross book value, will be exchanged for promissory notes (government IOUs or bonds) that will be provided by Bahamas Resolve.

While in opposition, the Free National Movement was critical of the Christie administration’s actions relating to BOB and Resolve Bahamas.

In January 2015, Prime Minister Dr Hubert Minnis, leader of the Official Opposition at the time, led about 100 supporters on a march to BOB’s Shirley Street location.

“We have assembled here at the people’s bank to declare with one loud voice that enough is enough,” Dr Minnis said on the steps of the bank at the time. “The government must act and they must act now. The use of government voting power to prop up failed leadership in the bank is unacceptable, when the Bahamian taxpayers have been made to swallow a $100m increase in the public debt load in order to prop up the same bank.

“The bank’s present leadership must go and they must go now.”

At the time, Dr Minnis also called on the government to “cause for an immediate forensic audit to be conducted of all decisions made by senior management which contributed to the potential collapse of the bank, the need for intense Central Bank intervention and ultimately the need for a government bail out”.

Shortly after winning the May 10 general election, the government announced BOB, among other institutions, would undergo a forensic audit.

The Tribune's reporter, Ava Turnquest, is to be commended for her excellent refresher of what Hubert Minnis emphatically represented to his supporters (on many occasions in the run up to election day) would be his unwavering position with respect to BoB and Bahamas Resolve if we, the people, elected him PM. Well Dr. Minnis, we, the people, elected you PM and now we have every expectation that you will make good on your many promises during the last election campaign to put an end to the continuing operating losses of BoB and the Christie-created failed Bahamas Resolve bailout model at the earliest possible time. This can only be done by shutting down both of these entities and putting them in official liquidation. There is no alternative course of action here that better serves the overall interests of both Bahamian taxpayers and BoB's non-government stakeholders. KP's suggestion that a debate in an overwhelmingly FNM controlled parliament would somehow justify the new FNM government keeping the doors of BoB open for business (by adopting and thereby endorsing the failed Bahamas Resolve bailout model created by Christie) is beyond absurdity!

Dr. Minnis and KP are about to needlessly commit political suicide in their handling of the collective financial mess at BoB and Bahamas Resolve. All can see that the patient was brutally abused by the previous government and has been lying on the operating table quite dead for sometime now, notwithstanding very costly emergency treatment that was doomed to failure from the get go - including several blood transfusions from the taxpayer donors that simply bled out onto the floor. We, the people, supported Dr. Minnis becoming PM so that he could certify the time of BoB's death and sign its death certificate. We did not elect the new FNM government to foolishly continue trying to resuscitate a dead corpse at a ridiculously absurd cost for the family members who are barely able to make ends meet, i.e. we, the taxpayers. Get on with doing what you promised you would do Dr. Minnis, otherwise you will be the one to end up politically owning all of the inevitable horrendous losses associated with BoB and Bahamas Resolve. Just let the chips fall where they rightly politically belong - in Christie's lap and the lap of the PLP - because no matter what you do these unpleasant and very costly chips are going to fall in any event, and you certainly don't wish to take serious political pain that rightfully belongs as a part of Christie's despicable legacy.

The new Chairman of BoB, Wayne Aranha, and the former head of BNS, Tony Allen, who is now also on BoB's board of directors, need to impress upon Minnis and KP that BoB and Bahamas Resolve are collectively dead and not worth keeping on what would undoubtedly become (through moral hazard) increasingly costly taxpayer life support no matter what is done. The relatively few jobs that would be saved and the ability to put bank branches wherever needed, all at a terrible cost to the taxpayers, would simply not be worth keeping BoB's doors open and taking all of the political fallout that would surely come in doing so. It's high time to engage a mortician (an official liquidator) and announce the burial (liquidation) arrangements!

Absolutely in agreement with the three above posts! I had been wondering about the mention of BOB possibly going to Bimini. It is understood that Bimini and other locations need a bank, but not at the expense of The People.

Unless the government discloses WHO received these the Lost loans they are as guilty as the borrowers.

There are several high ranking FNM's on the list of PEPs.

Peter and Hubert are afraid to open this pandoras box.

Could you imagine a potential sitting Cabinet Minister, MP, or Chair being named.

They have to continue the PLP's plan

after all. The FNM is only the "free" PLP's + those of the lighter hue who feel the country is rightfully theres.

You're a self-confessed racist with an irrelevant voice on any national matter warranting commentary or debate by the public. I will no longer be reading anything at all that you post to this website as BFB and would heartily recommend others consider doing likewise. You can post comments under another name but I suspect many of us would quickly recognize you for who and what you are. Ciao!