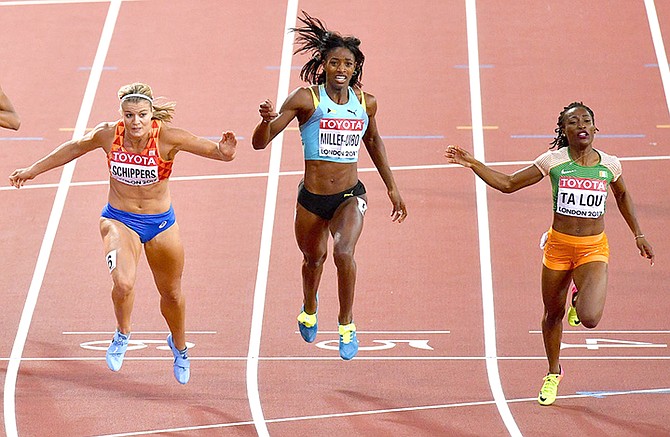 4.55pm UPDATE: Shaunae Miller-Uibo finished third in the 200m final to win the bronze medal for the Bahamas in 22.15. TyNia Gaither was eighth with 23.07. Dafne Schippers of the Netherlands won the gold and Marie-Josée Ta Lou, of the Ivory Coast, the silver. Full story HERE

LONDON, England: Forget about the disastrous 400 metre final that denied her a special place in history. Shaunae Miller-Uibo is determined to leave the 16th IAAF World Championships with at least a medal in the women’s 200 metres.

After her bid for the 200/400m double went up in smoke in the one-lap final on Wednesday night at the Queen Elizabeth Olympic Stadium, Miller-Uibo shook it off and sped to victory in the second of the three semi-finals.

The Bahamian national record holder clocked an impressive 22.49 seconds to erase any doubts about her fitness, after her legs wobbled in the final 50m of 400 metres the night before.

“I felt fine. I just want to go out and put on a great show tomorrow night,” said Miller-Uibo, after she matched the qualifying time of defending champion Dafne Schippers of the Netherlands. Schippers won heat two which also featured Anthonique Strachan. “I had to refocus for the 200m and now I’m ready to compete.”

“I had the race under control, everything felt fine and then I took a look up at the screen, lost my balance and that was about a wrap up,” she said. “By the time I caught myself, the race was already done, so I live and I learn through it. I’m getting over it and focusing on the 200m.”

And if you’re wondering, Miller-Uibo said she didn’t let her misfortune in the 400m get to her.

Coming into the championships, 22-year-old Miller-Uibo lowered the national record to 22.71, the second fastest time in the world this year behind her American training partner Tori Bowie, who was unable to suit up for the preliminaries after she went down with a spill that left her bruised after winning the 100m.

Jamaican Olympic double sprint gold medalist Elaine Thompson also missed the start after she only contested the 100m where she was fifth.

But Miller-Uibo said she’s prepared to do whatever it takes to get her second global gold to match the one she got in the 400m last year at the Olympic Games.

And for the record, Miller-Uibo reiterated that when she looked up at the screen, she lost her balance, kicked into the track with her left leg and things just fell out of place for her in that 400m final.

“A lot of people were thinking that it was (a cramp), but I just lost my balance,” she concluded.

She will get a chance to redeem herself in the final when she will run out of lane five at 4:50 pm EST next to Schippers in six and Ivory Coast’s Marie-Josee Ta Lou, the 100m silver medalist, in four.

Another Bahamian, TyNia Gaither, will be making her global final debut when she runs out of line three. She finished in fourth place in her heat with 22.85 for the last of the two fastest losers spots.

It will be the first time in the championships that the Bahamas will have two competitors in the final of the half-lap race.