Bahamas Loses Opener In U18 Centrobasket 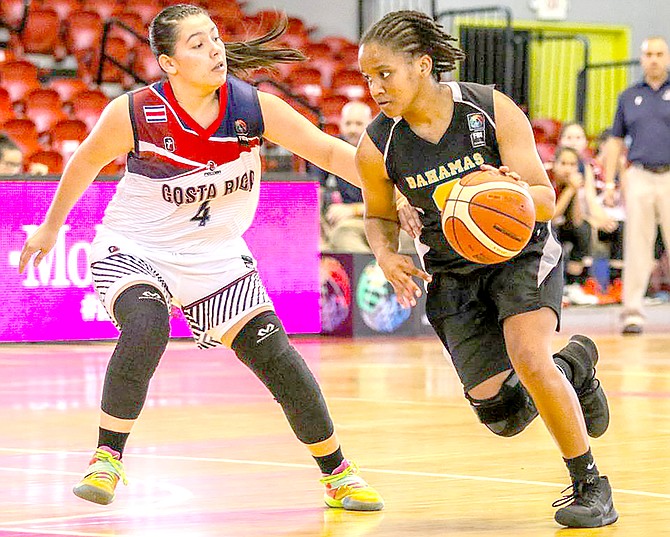 Team Bahamas struggled to score for much of the second and third quarters and failed to keep pace as they lost their opening game of the FIBA U18 Centrobasket Championship for Women.

They suffered a 53-39 loss to Costa Rica as the eight team tournament tipped off yesterday in Aguada, Puerto Rico.

The Bahamas scored just six points in both the second and third quarters as Costa Rica outscored them 27-12 during that timespan.

After they fell behind by six points early, the Bahamas rallied to tie the game at 10 on a Cox layup. Tied again at 12, the Bahamas took their first lead of the game 15-12 on a Cox three point play with just over one minute left to play in the quarter. She scored the last five points for the team, and her free throw was the difference as they took the slim one point lead into the second.

Costa Rica opened the second on a 14-5 run to take an eight point lead before Bowleg’s three pointer ended the drought for the Bahamas and kept them in contention. It was only one of two field goals for the team in the quarter that they scored just six points. Costa Rica took a 28-21 lead at the half.

“The competition level is intense and that’s what the coaches kept stressing when we were back home,” Bowleg said, “We just weren’t hitting open shots and open layups, we were responding too late on our closeouts and they were hitting their shots. I want to play in this gold medal game so as the captain I just have to tell my team we have to refocus and win these next three games.”

Costa Rica took their first ten point lead on a Gonzalez three pointer to open the second half and the Bahamas never threatened again. Gonzalez made another three near the end of the quarter to build a 15 point lead at one point. They took a 47-21 lead into the fourth and both teams scored 12 points in the final period.

Terrence McSweeney took over head coaching duties and said the team would have to bring the same level of intensity and focus to the game that they have in their preparation thus far.

“Our shootaround was awesome, the girls had a lot of energy but it all boils down to the third and fourth quarter, just like the senior team when I was with them in the USVI [at Centrobasket] we had no legs and we see the same thing here. My forte as a coach is to mentally and physically get the girls ready. We realised at the end of the game the legs were just not there. We rotated 10 players which was not the norm, but we were trying to search for the correct lineup,” he said, “They have to bring the game. We cannot be timid at this level of basketball because when players see that they will take advantage. Neither team shot it very well from the perimeter, our post up game was not where we wanted it to be, we missed easy shots we made at shootaround so now they have to soul search individually because they have to bring that these next few games.”

The top-three teams from the tournament will qualify to FIBA Under-18 Women’s Americas Championship 2018.

The Bahamas will face Suriname on Wednesday 2pm and Puerto Rico on Thursday 6pm to complete the group stage.