Ministers Lead The Way For Verification 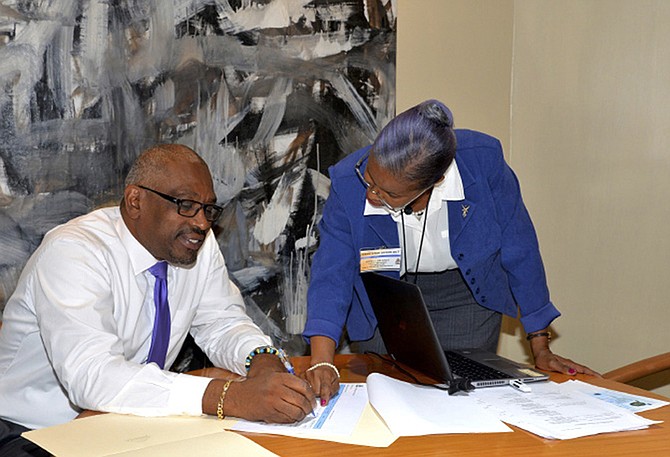 PRIME Minister Dr Hubert A Minnis and Deputy Prime Minister and Minister of Finance K Peter Turnquest led the verification process for members of Parliament before participating in the weekly Cabinet meeting on Tuesday.

Dr Minnis and Mr Turnquest were two of 15 Cabinet ministers to take advantage of the opportunity provided by officials from the Public Treasury Department who were at the Cecil V Wallace-Whitfield Centre to conduct the verification process for public service employees there.

Verification centres were established at public schools in New Providence and at government offices in Grand Bahama and the Family Islands since the process began on Tuesday, August 8. Verification ends Thursday, August 31.

Treasury officials say public officers who are assigned to the Ministry of Foreign Affairs and the Ministry of Tourism overseas offices, are expected to verify at their respective locations, “following the procedures that have been forwarded directly to them by the Treasury Department”.

Persons who fail to present themselves to be verified will have their salaries interrupted – not ceased - beginning September, 2017, until they comply with the verification and reinstatement process.

Treasury officials further say the 2017 verification process is not new in government, as “some form of the process has been undertaken by all serving treasurers”.

Allowances have been made for public service employees on vacation within and outside of the Bahamas. Those travelling outside of the country whose return date will not allow them to return ahead of the August 31 deadline, can verify at any Bahamas Tourist Office (BTO) or foreign affairs mission abroad while those within the Bahamas can verify at the administrator’s office in any Family Island, along with the Public Treasury (Central Abaco and Freeport, Grand Bahama).

Comrades! I'd suggest that Donna Delancy, does conduct a double-check to make sure - who is really who?
Look closely at their pictures ID's - twice - cause some them are real political tricksters. Donna, not good enough that they just looks like who they says who they is. Three them MP's - you might consider to require they undergo some kinds DNA test? Qualify if they is actually a man's, or a woman's. Them private things might trick you?

Just plain foolishness and another Kodak moment. For what it is worth. ZERQ

This is good leadership, showing cabinet ministers may have government supplied car and some a driver too, but they are still subject yo the law. Almost as good as Swindling Pindling being the first to declare his assets, shame that he lied about his sources of income though.