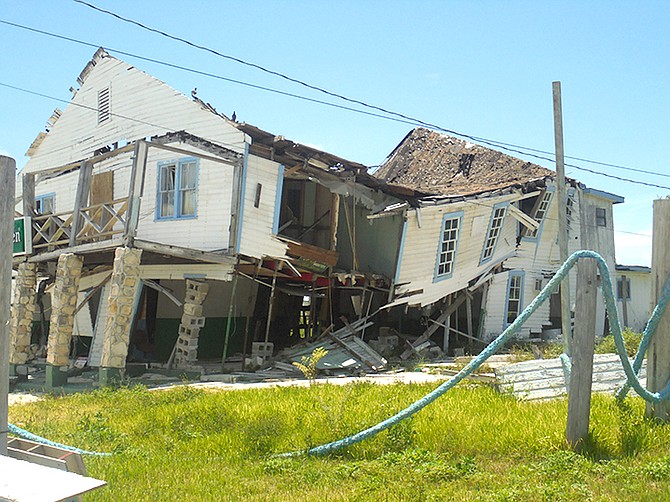 IT HAS been ten months since the passage of Hurricane Matthew, and not much has been done regarding repairs and rebuilding in the West End, Grand Bahama community.

There are still lots of damaged homes and structures along Bay Shore Road that are vacant, uninhabitable or condemned.

Many residents who once occupied those homes have relocated and are now living in temporary housing in the nearby settlement of Bootle Bay on a government rental assistance programme.

Just before the general election, repair work had commenced in West End, but since the change in government, some residents told The Tribune the work has been halted.

Elijah Stuart, of West End, believes that the Free National Movement government is moving too slowly on home repairs in West End.

Mr Stuart’s home was being repaired on a National Emergency Management Agency (NEMA) contract, and he was not happy with the stoppage of repairs.

“They should be moving much faster than they are doing now with these houses in West End,” he said, complaining that officials are wasting too much time conducting assessments.

“They are taking too much time interviewing people. They need to do something. I am an FNM, and we did not change the government for them to come here and for us to be out of jobs,” he said.

Last November, when The Tribune visited the small fishing village about a month after the storm, it was like a war zone.

Today, there are some signs of improvement: the community has been cleaned up; little food booths have been rebuilt along the roadside and some homes and businesses have been repaired.

But for many, help and assistance has not yet come.

West End resident Errol Miller’s home was severely destroyed during the storm, and he has not received any help with repairs.

“We need help, oh we need help here in West End,” said the 72-year-old, who this newspaper found sitting inside his severely damaged house.

“I have been trying for months and since the storm to get some assistance,” Mr Miller said. Some packages of shingles, roof material and a few boards of plywood were provided to him for repairs just weeks before the election.

Mr Miller is one of many residents who is living with family in temporary housing in Bootle Bay, but he comes down to his house in West End every day, hoping that help will come soon.

A building still without a roof in West End.

“I am hoping the new government right now will help us with repairs. The past government came to do work, but the election came, and the government changed, and the work stopped. I am hoping one day they will return and (work will resume).”

His three bed, two bath house is destroyed and needs to be rebuilt. His family lost everything - furniture and appliances. However, still hanging on a wall displayed for all to see was his prized Father of the Year plaque.

“I have been living here more than 21 years. I come here every day hoping and praying that someone will come and do something. I am not criticising the old or the new (government), I want the government to help me,” Mr Miller said.

“I was hoping to get some assistance by now. I was wiped out by the hurricane; my three bed, one bath house was destroyed,” he said.

The father of five now lives with relatives in West End.

“Since last October it has not been easy. I am actually on the floor. I have not gotten any assistance,” Mr Roker said.

He said that he had sought answers from various agencies, including Social Services.

“I am here every day, and I am hoping some good news will come through for West End because there are others in the same situation like me. I haven’t seen anybody come by and say we will assist you with this or that. I am just here waiting,” said Mr Roker.

He said that residents who lost their homes are concerned that they won’t be given any government assistance for rebuilding.

Kenneth Wilson, 89, owner of the Da Bight Better Days Restaurant & Bar, in The Bight, West End, said he too had received no assistance for the past ten months.

“Urban Renewal came here three or four times, and nothing happened yet. I have not received any help at all. I feel terrible because at my age I can’t do anything for myself and I need some help,”

Mr Wilson said that nothing had changed since The Tribune visited him last November.

His building is one of the oldest structures in West End. Mr Wilson had hoped to pass on his legacy to his children and grandchildren. The structure is on the verge of collapsing, and wooden planks are erected to brace the second floor. Mr Wilson has owned and operated the business for 56 years.

The iconic Star Club, owned and operated by the Grant family of West End, has now partially collapsed.

Earlier this month, The Tribune reported that the government does not yet have a timeline of when repairs will be completed on homes damaged as a result of Hurricanes Joaquin and Matthew, which ravaged part of the country in October 2015 and 2016 .

According to Press Secretary Anthony Newbold, while it is certain the homes must be repaired there will be no hurricane czar as was the case during the Christie administration.

He said NEMA and the Ministry of Works will oversee these efforts.

Mr Newbold also said as each member of Parliament has received their $100,000 capital grants, the public should see some repairs to homes shortly.

“We just got budgets and ministers can start to get to work. I imagine we will see some of that happening now. For example, as I said the constituency allowances are now available (and) the parks and beaches board has now been constituted. I spoke to the minister of the environment and he says “listen we are ready to go with this thing.’”

The really big question is: Will Shane be attending to the post-Hurricane Matthew needs of the iconic Star Club in West End after he's found guilty, sentenced, and then serves the lengthy time warranted by his crimes?

Not to worry their new reprehensive will see that their homes are fixed. I believe she is MS. Parker. call her up and state your case.

I meant represented Not reprehensive I would never disrespect her or any one else in that manner. Sorry about that. I used the wrong word.

I am so sorry to hear of the plight of the West End residents. I trust that they will receive much needed relief soon as we are not in an active hurricane season.

Birdiestrachan, after two (2) tries, you still got the word wrong. It is "representative."

It is so hard to see what happens to folks who have no building and contents insurance. It is even harder to pay for homeowner's insurance. Yet how can Government be expected to pay for all those who receive damage during natural disasters who have no insurance? Our Government does not even seem able to insure The People's edifices. Is there not some form of 'blanket' insurance policy that can be implemented in order to assist in some measure when necessary? Some of the proceeds from a national lottery would go a long way to self-insuring.

Thank you. I appreciate your correction

West End is a historical site ...... not fit for modern habitation ....... Relocate the residents