No Problem, Insists Dames - But Greenslade Out Of Sight 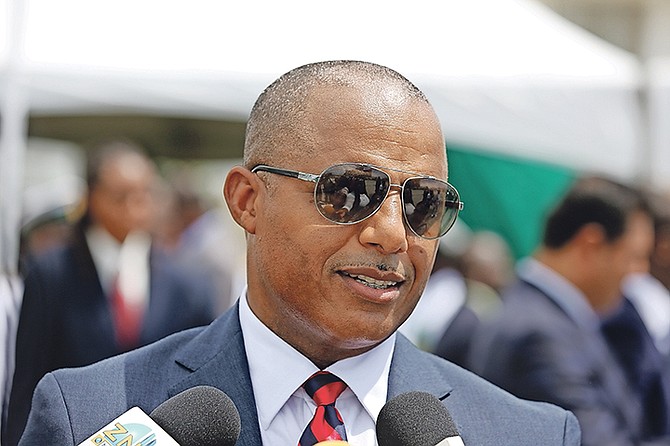 NATIONAL Security Minister Marvin Dames over the weekend continued to downplay the noticeable absence of Police Commissioner Ellison Greenslade amid reports that he has been asked to step down from the post.

Commissioner Greenslade was a no-show during a press briefing at the Paul Farquharson Conference Centre at police headquarters on Saturday, where Mr Dames, with the senior command of the Royal Bahamas Police Force presented several new crime strategies.

Throughout the briefing, Mr Dames insinuated that Commissioner Greenslade was present for the planning and review part of the conclave earlier in the day.

However, at the time of the press briefing, he had already left the property.

When asked about the absence, Mr Dames insisted that there was no reason for concern, adding that Mr Greenslade continues to operate in the post of commissioner on a day-to-day basis.

When pressed by The Tribune on the matter, he responded: “He (Commissioner Greenslade) was here this (Saturday) morning. He was here to my meeting and he participated. This was a sudden meeting, so sometimes people have commitments, but critical part of this happened earlier this morning.”

Mr Dames continued: “I am satisfied now that after having met with Commissioner Greenslade and Deputy Commissioner (Anthony) Ferguson; the other executive team members, as well as the divisional commanders. Often when we speak to these issues you don’t hear from the divisional commanders. These are the critical individuals who command the police stations throughout New Providence. They have to be at the forefront.”

In mid-July, The Tribune reported that plans are in place to promote Deputy Commissioner Anthony Ferguson to the top post, contingent on Commissioner Greenslade accepting the post of high commissioner to London.

It was also reported that Deputy Commissioner Emrick Seymour, now in charge of Freeport, will be transferred to Nassau as deputy commissioner.

In the weeks since these reports first surfaced, Commissioner Greenslade has remained out of the spotlight.

Earlier this month, Mr Dames told reporters he was in the “business of governing”, as he sidestepped questions on Commissioner Greenslade’s future.

Transparency personified. I wish he would simply say that it's the people's time not their business, but, sound of actions is deafening.

Its okay Marvin just continue to sweep national issues under the carpet, you have 5 years of sweeping to do so.. you will build up lots of arm strength.

In turn the Bahamian populace will sweep you out of office at the next general election.

NB: there has been no national security minister within the past 20 years who's been able to retain a seat in the HOA after filling the role as minister.

Funfact: Bahamians may have outgrown the current COP however the way Dames and co are handling the matter can create lots of enemies. Greenslade has done more to help the country that Dames ever will.

Mr Dames should discontinue the practice of showing up at police news conferences, speaking on police matters, stop acting like the commissioner and more like the "Minister of National Security". To do his job, he'd have to have an understanding of ALL the threats against the country of which crime is only one. Let the commissioner do his job.

Problem is Greenslade hasn't been doing an effective job of fighting crime for years....same goes for many of the other brown uniformed guys.

And that's fine, but it doesn't mean .Dames should act like he's Commissioner. I really wish Dr Minnis would hand each of his ministers a job description

Dames do not have to answer for Greenslade's absence ....... The COP answers to the PM

I sure I heard the PM speaking to matters like this....Dames you suppose to be a policy setter nothing else. I guess the PM change is mind

Mr: Greenslade operates as a Commissioner on a day to day basics ?? What does that mean? Dames should show more respect. after all he is mere mortal. Lest he forgets.