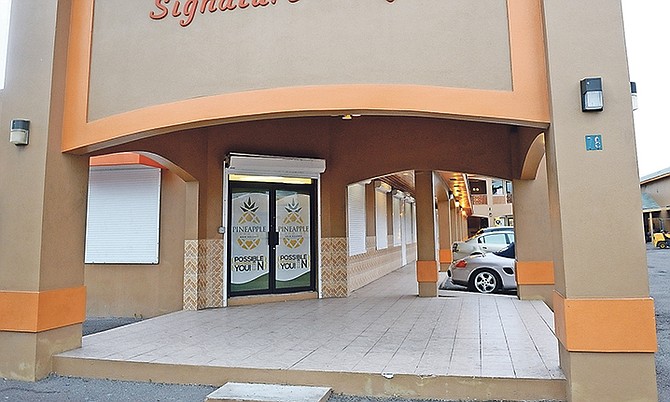 THE Securities Commission has warned the public that local “asue” business Pineapple Express Asue Holders should be viewed as “unsafe and very high risk” and advised members of the public to “exercise extreme caution when considering to engage with this entity or persons soliciting membership.”

The commission said the methods used by Pineapple Express is structured like a “pyramid or Ponzi scheme” where promoters claim they can turn a small investment into large profits within a short period of time. The statement urged anyone with concerns about the company to contact police.

Hundreds of Bahamians have now been left in limbo after the business temporarily closed its doors following a meeting with government officials earlier this week.

Pineapple Express, according to their Facebook page, is an asue holders company “dedicated to helping persons thrive financially.”

The Tribune understands that on Monday, the company, after being unable to pay out several “hands” or disbursements to customers was called into a meeting with the Securities Commission.

“In reality, participants make money solely by recruiting new participants into the programme. The scheme gathers momentum until it crashes,” the Securities Commission said.

“Fraudsters behind these schemes typically go to great lengths to make their programmes appear to be legitimate multi-level marketing schemes, but the schemes eventually fall apart when it becomes impossible to recruit new participants, which can happen quickly…Ponzi and pyramid schemes are very harmful to the unsuspecting public as invariably, any payouts for all people joining these schemes depend solely on what comes from the people who join afterward. So, without new investors, money for payouts very soon becomes insufficient. Therefore, under no circumstance are these schemes to be viewed as bona fide investment programmes as they tend by nature to involve fraud.

“The commission hereby advises that the activity of Pineapple Express, its agents or consultants should be viewed as very high risk and unsafe. Therefore members of the public are advised to exercise extreme caution when considering to engage with this entity or persons soliciting on behalf of this entity. Persons who decide to do so, do it at their own risk. Anyone who is concerned about having transacted with the above named company, their agents or their consultants, should contact the police,” the commission added.

According to Pineapple Express’ Facebook page, several hundred persons were able to receive payouts before the company experienced difficulties.

On Monday evening, Pineapple Express executives met with members at the Breezes Resort to discuss the way forward.

Hours before the meeting, the company posted that they would be closed on Monday, August 21, and reopen for business on Tuesday, August 22.

However on Tuesday, they remained closed and asked anyone with questions or concerns to send them a message on Facebook.

Shortly before midnight, the company issued a statement saying government officials and authorities have “asked them not to open.”

“We will not resume operations until a new system is in place,” the company’s statement noted. “We understand fully that this process can take longer than we anticipated and so we are willing to refund members but there will be a process.

“Members will be contacted in groups based on the dates they joined to schedule times to receive their refunds. We are truly sorry and apologise for the inconvenience,” Pineapple Express added.

Many persons have described the business as a “pyramid scheme,” similar “loom” phenomenon, which became popular in the Bahamas several months ago.

In January, the Securities Commission announced that looms are fraudulent pyramid schemes.

In the loom scheme, persons were asked to join groups and contribute small sums of money to get a larger payout, for instance $100 with the promise of getting $800.

Despite the issues and concerns with Pineapple Express, an overwhelming number of persons have decided not to request their money back and instead “trust” that the company will reopen.

Under the company’s statement on Facebook one person wrote: “Why go to the bank for money for back to school when we could go to Pineapple? Their hands are being forced by the government. This is truly for the poor people. Think out of the box.”

Another member said: “Until I see a post saying ‘sorry guys, this failed’ then I will get my money back, until then I will chill. The dream is still alive, they are just looking for a better way to assist us.”

Other persons, however, were not as forgiving.

One person wrote: “Please try hard give me my money back. I been messaging for weeks now and cannot get a response. Please do not go missing with my money. I knew this was too good to be true, I should have known better (sic).”

The Tribune attempted to contact Pineapple Express but calls were not returned up to press time.

How did they get a business license and TIN?

Comrades! I hear some pretty interested politically connected individuals may be directly/indirectly associated with this blatant scar on society scheme allowed to have a public face? Who in government should have stropped this scheme from day one? Conveniently, no names are mentioned in this article when it comes to whom are the individual(s) at the helm of this scheme's ship? In this just more of how the bigger fish operate in full view - while the poor and the near poor seem to be always kept in check by our government's officials?

Here we see the Securities Commission admitting they have no teeth whatsoever.....all they can do is warn the public but not shutdown or suspend the operations an entity they believe to be engaged in fraudulent activities. The same applies to all our other regulators....Central Bank, BISX, Registrar of Insurance Companies, etc. All worthless regulators supported by our tax dollars that can't do diddle-dee-squat to protect the public. What a freaking joke! So now we must ask ourselves why hasn't KP as our Minister of Finance shutdown or suspended the operations of Pineapple pending the completion of a proper investigation? Also, why hasn't Minnis taken any steps towards repealing all of the gaming web shop legislation that was enacted by the corrupt Christie-led PLP government and which is wreaking havoc on our economy!! Just how much money did Minnis and the FNM party leadership take from the corrupt racketeering numbers' bosses, like Sebas Bastian and Craig Flowers, to fund their last general election campaign, and what were the quid pro quos given by Minnis and the FNM party leadership?!!! We, the people, have a right to know.....after all, Minnis promised that his FNM government would set the gold standard in transparency.

Behind the 8 ball. There are tons of these MLM ponzi schemes around town. They've now grabbed on to the health care industry. It was so funny a week ago seeing one of the well known network marketing reps who was swearing by one brand and the wonders it had done for them all of a sudden promoting a new brand and how wonderful that one was.

Bahamian people, eat your veggies, cut the carbs and sugar , watch your portion sizes, drink water and exercise daily, these people just taking your money with these untested "natural" products. Any product, natural or not, taken in the wrong dosage can be poison.

If the product was that great, they'd be making the money selling the product, not getting people to join the scheme.

Bahamians just would not stop this "something for nothing" attitude. That's why these schemes work. We have alot of gullible people out there. When they're not gambling and making the numbers boys millionaires, they're throwing their hard-earned money away on schemes like these. Trust me when I say that the Government will have a hard down cracking down on these shysters because the mentality of the people is such that they will always strive.

Truth to the matter is there are persons all over the internet with similar schemes. At one point some clowns were hacking into your computer then 'selling you a package" to fix your computer and make it run faster. Once you gave them your credit card information, they went to work and cleaned it out. The computer never got fixed and don't waste time tying to call the numbers they gave you. And property "time-share" is another big rip off for the most part. persons sell you ownership in parts of the world that you will never visit or visit only once in a life time. then when you try to book a stay at your time-share it is always unavailable. The most likely reason is because it doesn't exist.

If something sounds too good to be true, it probably is.

The largest Ponzi scheme in the country is called NIB. Good luck getting your pension if you are 40 years old or younger. Years of malfeasance by the government appointed managers has resulted in really stupid investments of our money into entities such as BOB and BA.. These so-called investments will never be recouped or provide any profit. This will result in a shortfall of the money necessary to pay pensions in the future. NIB is also greatly overstaffed with workers appointed for political reasons. The payroll for these staff sucks up most of the money contributed by working Bahamians. NIB is a good thing in developed countries however in a country with systemic corruption like the Bahamas it is a disaster.