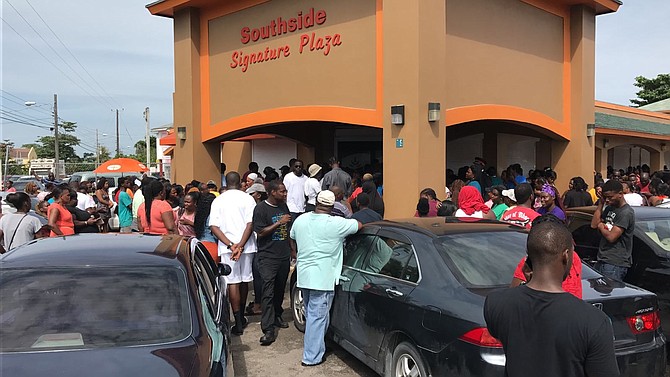 THE Securities Commission of The Bahamas yesterday referred its findings on the Pineapple Express Asue Holders difficulties to police, officially classifying the self-proclaimed “asue” business as an alleged Ponzi or pyramid scheme.

A spokesperson for the Securities Commission of The Bahamas (SCB), in an email to The Tribune on Monday, said despite not receiving any formal complaints with respect to Pineapple Express, it could, from information obtained, conclude that the scheme fit “typologies of a pyramid or Ponzi scheme”.

Hundreds of Bahamians were left in limbo after Pineapple Express temporarily closed its doors following a meeting with government officials last week.

Last Friday, police were called as chaos followed at the company’s Zion Boulevard office, with scores of customers storming the facility with hopes of recouping funds invested. The Tribune understands only a small number of people were refunded on Friday and others were told to return on Monday.

However, despite their best efforts, scores of people were not reimbursed up to press time Monday. When The Tribune visited the company’s office, no one was on site.

The commission, in its email to The Tribune yesterday, wrote: “Based on a referral from the Business Licence Department, as well as investigations into the activities of the operation, representatives from the commission met with the principal of Pineapple Express Asue Holders on August 21.”

When asked if the commission was able to levy a fine or some other form of punishment on the company or its operators, the SCB indicated that because the operation known as Pineapple Express Asue Holders is not a “licensee of the commission,” it could not exact administrative penalties in this matter.

The commission said it took the appropriate course of action by referring the matter to the police on Monday.

Pineapple Express, according to its Facebook page, is an asue holders company “dedicated to helping persons thrive financially.”

Operators of Pineapple Express have not spoken to the press and have only offered comment on their difficulties through statements posted its social media accounts.

When contacted Monday, Assistant Commissioner of Police Clayton Fernander said he had not yet received the formal brief on the matter.

I have no sympathy for these people who think that people will just give them money for nothin'. Do any of them have the sense to even think about HOW or WHY an establishment can or would be able to quadruple your money in 14 business days, potentially over and over again for months and years? JUST PLAIN STUPID!!

Comrades, knowing that the entire adult population of the Bahamaland - totals no more than 61,333 adult ages man's and woman's - if the hitch of the pitch is that the game is too damn good be true - then its crooked and those at the 'top of the food chain' - damn well knows its crooked. Time some genuine parading some folks down Bank Lane's Rouges Row...and make them wear their red shirts - if the talk on the street corners is true?

It's so weird the number of these pyramid payout schemes in this country, many are now tying themselves to health programs. So it must be good right? I often wonder if people notice that they only get airtime on public broadcasting stations in third world countries

Yet another fine example of the Securities Commission acting much too late. Thousands of desperate people have no doubt been swindled with little or no chance of getting any of their money back. Much like the minority shareholders in Bank of The Bahamas!

Too true. What were they doing Aug 22nd, 23rd, 24th, 25th, 26th, 27th, 28th, 29th?? What precisely were they doing to justify their enormous salaries? This is egregious dereliction of duty. I would fire every last one of them.

I hope all these dummies learned their lesson....

One born every minute. Anyway I am starting a scheme where you pay me $500 for a return on 1000 coconut trees that will be planted next year. Investors will be assured of a return of $2000 in the not to distant future. Please apply to the fairy godfather, cloud avenue, planet earth.

I went on their Facebook page 2 weeks ago, when a friend inquired about this deal, and tried to warn people that this was a Ponzi scheme. I got called a "hater" and a few worse names. I was told to get lost, and given directions to a few places where I should go get lost. I'm trying not to laugh now, as it's a shame that a lot people got taken for their hard-earned money.