Lloyd: No Resting On Laurels While Nation Has D Average 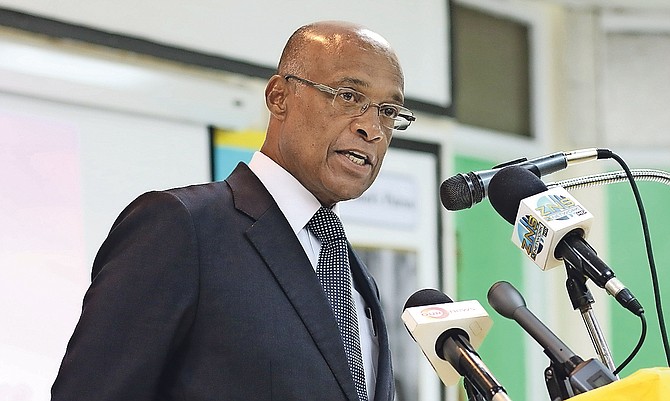 EDUCATION Minister Jeff Lloyd toured schools on Grand Bahama and delivered a powerful and inspirational address to hundreds of teachers as they prepare to return to their classrooms next Monday.

At the Ministry of Education’s annual Teachers’ Enrichment Day at the Jack Hayward High School gymnasium on Wednesday morning, Mr Lloyd did not mince his words and told educators they can’t afford to rest on their laurels while the national exam results remain at a D average.

“For the last ten years or more, the BGCSE results have shown not (any) improvement; we started out with a D, we are still at a D – something is wrong,” said Mr Lloyd.

Mr Lloyd stressed that the only way to fix the problem is to go back to the beginning and start with the pre-schoolers.

“We will start over - we are going back to the infants,” he said.

Referring to a study by the Inter-American Development Bank, the education minister noted that the report indicated that pre-schoolers in Latin American and the Caribbean regions know fewer words and have less cognitive ability than their peers in the developed nations.

The IDB released the flagship study in 2017 which stated that the average Latin American and Caribbean student is more than one year behind what is expected based on the region’s level of economic development, even though the region spends on average about the same percentage of GDP on education and skills development as more developed nations.

“We are failing our society,” said the education minister, who added that this year “great emphasis” will be placed on two-and-a-half and three-year-olds.

Reporting that less than half of the nation’s pre-schoolers are in an appropriate programme, the minister said: “We are setting up ourselves for catastrophic failure if we do not address that.”

He assured them that when resources permit, the Ministry of Education is going to mandate that all two-and-a half and three-year-olds must be in a ministry approved school.

In the area of curriculum development, Minister Lloyd stressed the importance of playtime, and activities such as art, music, and drama.

“Our curriculum does not speak to life. We’ve taken art, music, and drama out of our curriculum. They are supposed to be essential subjects in the curriculum.”

The minister told educators: “When it comes to two-and-a -half-year-olds, we are going to emphasise numeracy, literacy, oration, but more importantly cognitive skills, and social skills, and emotional skills.”

He also stressed the importance of technology in education delivery.

During his visit to a primary school in Grand Bahama, Mr Lloyd was surprised to learn that there was no Wi-Fi available at the campus.

“I just came from Maurice Moore (Primary), and I asked the principal if there was Wi-Fi. She told me ‘no.’ No Wi-Fi? It will be addressed; there will be technology in our education delivery throughout our country,” he said.

Comrade Minister Jeff, book learning no longer means you will be earning more money - when 6 out Ten Bahamalanders of working age are not returning home at the end of the week with full time paycheques in their pockets...... And I'm not including discouraged workers unable to even find a job and those in prison, or collecting social service benefits.
Comrade Minister Jeff, stop trying to fix the teachers. Fix the missing paycheues!

'can't afford to rest on their laurels'. with impressive consistency in maintaining the D average, the question is, what laurels does he refer too?

Repost - Sean McWeeney is one of those responsible for destroying the high quality of education we were receiving from expat British teachers prior to the early 1970s. As Head Boy of QC he made it a point to destroy the very thing that he himself had greatly benefitted from......a good primary and secondary school education by mainly well trained and highly devoted British teachers all the way through the GCE 'A' level program at the time. Loftus Roker under SLOP later ended up putting the nail in the coffin of a good education for most Bahamians by overnight kicking most of the highly qualified expat teachers out of our country and replacing them with unqualified Bahamian teachers....with devastating consequences for our public education system. It has been all down hill since then with successive PLP and FNM governments realizing that it is not in their interest to have well educated voters....hence the dumbing down policy of successive generations of voters, with our public education system being starved of the resources needed to draw the best available teaching talent. And only recently does this imbecile Jeffrey Lloyd announce that it is the Ministry of Education's intent to keep on or rehire the very same old Bahamian teachers who are responsible for the appalling exam results that he is now so vociferously complaining about! Go figure!!!

Jeff Lloyd talks a good talk ......... but it takes a giant with Big Balls to change this public education system ......... He has not done anything of note as yet ........ He still has the same executive team from Fitzgerald running the Department ..... That says it all