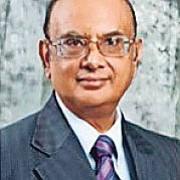 PRESIDENT of the Bahamas Electrical Workers Union Paul Maynard yesterday cheered the resignation of former Bahamas Power and Light (BPL) Executive Director Deepak Bhatnagar, calling him the “symbol” of the company’s past failures.

Mr Maynard, who has never minced his words when it comes to Mr Bhatnagar, yesterday hailed the resignation of the executive director, pictured, along with the resignations of Chief Financial Officer Cecile Green and Human Resources Director Marisa Mason Smith, as a key step in the right direction in the history of BPL.

“I don’t have nothing against the other two, (Cecile) Green and (Marisa Mason) Smith, but Deepak (Bhatnagar) was one of the worst things to ever happen to this company and this country,” Mr Maynard claimed.

He continued: “I mean the man had no idea how to manage electricity. Look at every decision he was tied to, not long after it was made, it failed. I have no idea why we brought him back in the first place.”

“He was not suited for the position and lived only to get fat off of this company.”

In August, Mr Maynard called into question the life of luxury, he claimed, was being afforded to many in management positions at BPL, all while the company failed to meet many of its production goals. Mr Bhatnagar was his main target.

He told The Tribune at that time: “I am not afraid to say what needs to be said in this instance. Mr (Deepak) Bhatnagar, how is he still here eating up money and providing nothing?”

Mr Maynard continued: “This man has been here and is still here eating up money. He messed up on a number of initiatives and is still working the clock . . . This is where the country is losing out, people like him.

“So while we in a rush to jump all over BPL, the company, let’s take a hard look at these people buried in the system, finding ways to live the life off of us,” Mr Maynard concluded.

Mr Bhatnagar with former Minister of Works Philip “Brave” Davis steered a task force appointed by the Christie administration to look at various proposals for a generation plant which would have assisted in dealing with the challenges at the utility provider.

He was re-appointed to BPL’s board by the Minnis administration in July.

BPL’s Chief Executive Officer Whitney Heastie on Friday confirmed the departures in a brief memo to staff, indicating that Ms Green, who had worked with the company for nine years, would be replaced by Acting CFO Chandrice Ferguson. Ms Mason-Smith worked for the company for more than 15 years while Mr Bhatnagar had served the company since 2016, the memo said.

A source close to BPL’s board yesterday also confirmed the two remaining positions will be filled early next year.

So what are you the symbol of our countries failures?

Who brought this Deepak to our country???????

is he the only one presiding over failed initiatives?

why not name some incompetent bahamians too.

i am told this fellow is now bahamian too, so bkast others as well.

Re-post: Minnis and his fellow cabinet members would be wise to ensure Deepak Bhatnagar is removed from all government-related posts. I could say much more, but most who know Bhatnagar know exactly why I hold this view.

This is a xenophobic county those that know these projects know Bhatnagar contributed. There wasn’t one scandal of theft or firing under him . He was right man to people that made him slog and use his work . Foreigners are needed in every country to do work . America is an example of vast immigrant talent to make it a supreme power . Have facts before you can accuse character . There is no way 3 prime ministers would have hired the same man over and over again . So did minnis ! Never fired but was needed and appreciated by many . Everyone that knows him and worked with him knows that !!!