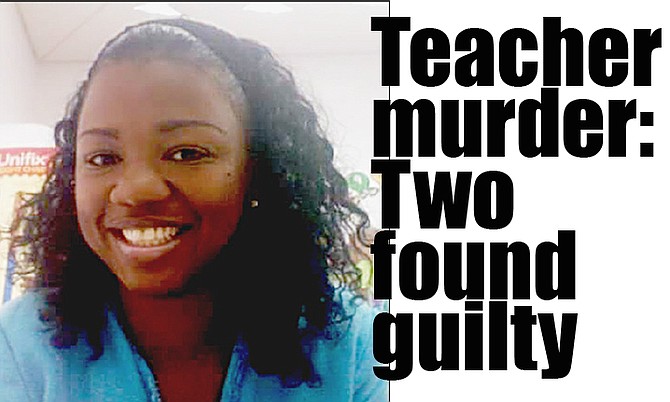 The 12-member jury, after close to two hours of deliberating, returned a guilty verdict of murder for Johnny Mackey of Bonaby Alley as well as the teenager accused in the matter, who cannot be named because he was charged as a minor.

The third accused, Armando Sergeant, of Kemp Road, was found not guilty by a vote of eight to four of murder, but was found guilty of the lesser charge of manslaughter.

The jury returned unanimous guilty verdicts for all three accused on the attempted murder, conspiracy to commit armed robbery and attempted armed robbery charges they each faced.

Sergeant’s attorney David Cash, upon hearing the jury’s verdicts following an entire day of summation by Justice Bernard Turner, submitted the verdicts against his client relative to murder and attempted murder were “inconsistent”.

Otherwise, Mr Cash, along with his fellow defence counsel Sonia Timothy and Dorsey McPhee, the latter two of which represent the teenager and Mackey respectively, requested probation reports for their clients.

Justice Turner subsequently adjourned the matter to March 1, 2018, at which time the court will address the requested reports by counsel, as well as field counsel’s submissions regarding the convictions.

Yesterday marked the end of the trial over McIntosh’s killing on November 11, 2015.

The trial was told the teenager, who was 17 at the time of the incident, along with Mackey and Sergeant, attempted to rob McIntosh of her 2009 silver coloured Toyota Corolla worth $6,000.

All three had denied the allegations.

During trial however, Crown witness Detective Sergeant Kendra Wallace said the teenager admitted to shooting the fourth-grade teacher when interviewed on November 20, 2015 at the Central Detective Unit (CDU).

Det Sgt Wallace said the teenager made his initial confession to a social services employee in the presence of herself and the interviewing officer after alerting the officers that he needed to “get something off his chest”.

Det Sgt Wallace said the teenager, in speaking with the social services employee, said he felt bad about what he did and only did it because he wanted to steal the car McIntosh was driving.

Det Sgt Wallace said the teenager again confessed to committing the crime at the start of the actual record of interview, but denied participating in the interview process on the advice of his attorney.

The investigating officer, Sergeant Jamal Evans, said when he took the witness stand the teenager told police in his initial record of interview he was “sorry” and did not “mean to kill her”. At the time, Sgt Evans said the teenager “appeared to have some remorse” when he initially interviewed him on November 20, 2015.

Regarding Mackey and Sergeant, Det Sgt Wallace further said in her testimony how both men, in their records of interview on November 18, 2015, told officers the teenager was the one who shot McIntosh.

Det Sgt Wallace said Mackey – who the Crown charged was the person lying in the middle of Parkgate Road on the night in question, thus causing McIntosh to swerve to avoid hitting him – admitted he did so but said it was because he caught a “cramp”.

Meanwhile, Sergeant, she said, admitted to having knowledge of the offence but denied shooting the deceased. According to Det Sgt Wallace, Sergeant said he saw when Mackey dropped to the ground and said he knew it would be a robbery.

As the car got near, he said the teenager approached and subsequently shot the deceased.

However, subsequent to the closure of the Crown’s case against them, all three convicts took to the witness stand, and claimed they were all beaten by police to give false confessions concerning their alleged involvement in the crime.

Mackey, in particular, claimed he was repeatedly “stomped” in the scrotum by police to give a false confession, so much so his genitalia became “swollen”. He further said he was fish-bagged repeatedly, meaning a plastic bag was placed on his head by officers.

Mackey claimed when he told them to stop or they would kill him, officers told him they could simply put a rope around his neck and place him back in the cell and said he hung himself because he was already suffocating.

Sergeant, when he gave his testimony, claimed he was given a proposal by police so that he would identify the teenager as the shooter in the crime. After he denied the proposal, Sergeant said he was beaten and fish-bagged by officers to coerce him to comply.

Sergeant said he was ultimately made to sign documents pertaining to the initial interview, the contents of which were not true. Nonetheless, Sergeant said when he was arraigned for McIntosh’s murder on November 23, 2015, he was charged with three murders.

However, Sergeant said the other two murder charges were later dropped.