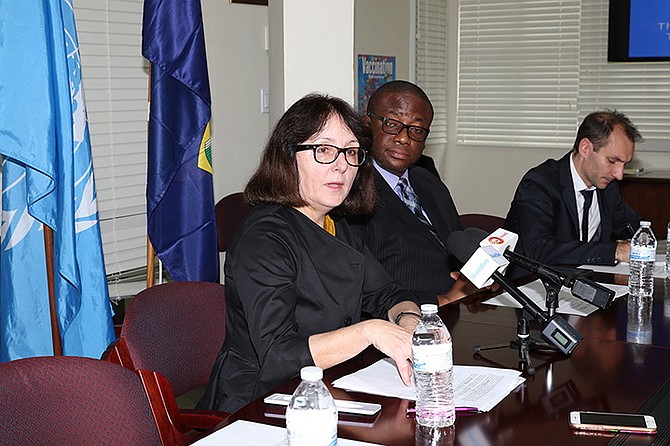 MARITAL rape is the most pressing gender-based issue facing the Bahamas, according to Dubravka Šimonović, the UN's special rapporteur on violence against women, during her inaugural country visit to the country.

Ms Šimonović, a human rights expert, stressed the legality of martial rape is “a sign that something is deeply wrong”, adding that the issue could easily be resolved through legislative changes.

She is tasked with presenting a report on the status of human rights in the Bahamas - with special focus on women and children - due to the country's renewed bid for a seat on the UN's Human Rights Council.

In her End of Mission statement, Ms Šimonović found that in the Bahamas, “violence against women is hidden, denied, and even more worryingly, accepted as normal.”

This is reflected in our current legal framework, which contains many “shortcomings.”

One such shortcoming is that the law “does not outlaw marital rape — except in narrowly-defined exception circumstances.”

Ms Šimonović discussed the matter with the Office of the Attorney General and was informed, “necessary revisions (to the law) are currently under consideration.”

According to her statement, the objective of Ms Šimonović’s inaugural visit to the Bahamas (December 11-15) was to “assess both the scope of gender-based violence” in the country and “the measures taken by the authorities” to provide protection and security to women and girl victims.

Particularly, young women between the ages of 16-18 are the most vulnerable demographic in Bahamian society.

Addressing the issue of contraception, Ms Šimonović’s suggested that a new law be enacted to ensure the age of receiving contraceptive and other health services without requiring parental consent (18) is consistent with the age of consent (16).

This way “a girl can receive adequate sexual and reproductive health services, possibly reducing the risk of HIV infection.”

In terms of nationality, Ms Šimonović considers the fact that “only a Bahamian man, not a woman, having a child born outside of The Bahamas can pass on his Bahamian citizenship to his child” to be discriminatory.

The mission statement read: “this violates the human rights of women to a nationality, equality in the family and access to public services.”

Referencing the Minnis Administration’s mandate that illegal immigrants leave the country by December 31st, Ms Šimonović wrote that this results in the “detention and quick deportation of hundreds of individuals, targeting the Haitian descent community disproportionately, some of whom may be born in the Bahamas.”

“To avoid the expulsion of someone entitled to refugee status, a victim of trafficking or anyone born in the Bahamas with a right to Bahamian nationality, the Government should ensure that legal counselling about the proceedings is available.

“In particular, it is urgent for the authorities to speed up the immense backlog of Bahamian nationality applications for Bahamian-born individuals of Haitian descent . . . to guarantee their rights.”

Ms Šimonović also underscored the connection between corporal punishment and a predilection to violence in adulthood.

She told reporters, “Corporal punishment in schools is problematic. It was something that was abolished in a number of countries (world over) and it is important to see links between those that are exposed to that type of punishment at home and in school and then how they (reproduce) this violence later on in life.”

Further gender-based issues Ms Šimonović found include the lack of female political participation and the widespread lack of awareness and education surrounding gender based violence. Furthermore, violence against women is underreported, under prosecuted, and sentencing is rare.

In her statement, she called for a “comprehensive law on gender based violence against women and domestic violence that could cover all victims of violence”.

Ms Šimonović also pointed to the lack of women’s shelters, especially in Family Islands, and called for a specific shelter that would allow the presence of a male child over the age of 10. When asked by reporters about funding, Ms Šimonović noted that shelters fall under services that governments must provide. However, she also said that nongovernmental organisations and the private sector should play a role.

Other recommendations Ms Šimonović made include the establishment of a National Human Rights Institution, and a free 24-hour assistance hotline for victims of gender-based violence. She also called for more women in the police force, and for a policy that male and female police officers respond to incidents of violence against women.

Ms.Simonovic will make very, very few friends in The Bahamas. Most of us don't even know there is a world outside of Nassau and Miami. And, for god's sake, keep her away from Leslie Miller and the other male Bahamians who are allowed to spout their nonsense publicly. From my perspective, there is a link between bible clutching religious fundamentalists and social backwardness. Of course that is not allowed to be spoken of. Though the truth is right there in front of us. Let the rabid righteous critics come forward.

Porcupine..you really sound like a jackass! If you read the marriage wows as presented in any Christian Church marital rape cannot exist. And if you watch what’s going in the US with so many being accused of inappropriate behavior you will see the intention of this agenda. The more they restrict and take away the powers of a male, the more they emasculate him. The intention of these people is to make little distinction between male and female and married and single. But yet they want to hold on to supremacy of race. Then that will become the only single qualifying characteristic for who is better than whom. Does the name Hitler ring a bell?

John, I struggle on a daily basis to justify taking the few minutes to comment on issues of seeming importance in this country. Soon, I will cease completely due mainly to ignorant jackasses such as yourself. If yours is the best of the deep thinkers this country has to offer, sea level rise will be a blessing. Where does Hitler come into this equation? "The more they restrict and take away powers from a male...." For god's sake John, what the hell do you read, other than The Tribune?

It's interesting to see John talking about issues of race, and stealing my Nazi concerns. This from a person who abhors Haitians, a set of people from whom he came.

Not notwithstanding, these types like this lady, keep them out of your country. They are more dangerous than 1000 Wooden loops. They push certain agendas under the guise of Human rights. Police have to be super careful, different types of marriage being proposed and the forced indoctrination of children with * matters.

John ........ I agree with you ...... the whole idea of this so-called "feminist movement" is to emasculate men ...... Yes there are some male abusers (just like there are female abusers) ....... but men tend to suffer silently, while women holler to Sandra Patterson and dat Yardie woman Nicholls ...... but when you see so many broken, drunk and sick men who die long before their spouses, anyone ever stops and wonder why????? Why are there so many widows and so few widowers??????

How many Bahamian trap Bahamian and foreign men with secretly conceived children???? This issue goes both ways .............. These so-called experts make it out to sound as if Bahamian women are innocent victims of social and relationship dysfunction ....... It takes TWO to tango. ................ The men are always made out to be abusers and monsters in these reports.

mind boggling. she could have at least googled gender and bahamas on the way to the meeting and see what comes up lol...

The facts are clear and simple: The Creator (whom ever yours may be). Set out rules and guidelines that are to govern mans existence and his presence on earth. There no need for human to adjust or alter these rules. Especially when the persons attempting to do so never intended to follow the rules in the first instance. There are five people in a car headed to Georgia from Florida. But there is only one steering wheel. So the driver will determine how the res of passengers get to Georgia and when. And despite the directions and teeth sucking he may get from others, God put man behind the driver seat. And the more and more he tries to share this responsibility with others, the further and further he goes off course. A good woman will never challenge a mans ability to lead and a good man will never mistreat or disrespect a good woman.

I agree with John on this comment. I believe a man should lead his family and I don't mind showing him this respect, but in return he should respect and treat me with his love always. I enjoy a man that holds me proudly by his side.

Rape is rape no matter who does it. Are you suggesting that because we have a piece of paper we are free to rape our wives?

I don't consider sex while married rape, unless it involves violence. If he pushed me down on the bed and physical took it, it's rape. More often, maybe he's in the mood and maybe your tired, just give it to him. If he's any good you'll get in the mood. That's not rape.

So, obviously the Fox Hill prisoners are once again left to suffer in the dark.

Finally, i'm not so sure the term "shortcomings" should be used in this arena.

I never understand an educated man who thinks a woman with a ring on her finger can have sex forced on her and it's ok, because she has a ring on her finger. This isn't about some ncident where the wife says I have a headache or I dont feel like it today, we're talking about women being brutalized out of rage under the guise of a written contract. That cannot be ok.

Laws aren't generally made for "good" people, they're made to protect the weak and vulnerable and to put the breaks on evil, and I do mean evil.

If we can’t agree on what constitutes rape, regardless of a piece of jewelry and a piece of paper, we’re way worse off than I thought.

Ladies, if this is something you care about, be careful who you date.

“From my perspective, there is a link between bible clutching religious fundamentalists and social backwardness.”

Porcupine, you ain’t the only one.

One last thing, I agree that the focus shouldn’t only be on women. Men are also abused in this country, and no one seems to care because they’re “men” and they can take it. We need to protect our men, too.

All we can assume is that if at least 50% of the 4000 Bahamian church leaders in this country agree with the present law concerning a spouse being not able to report a rape while married, then the Bahamian version of Christianity is very similar to Sharia Law practiced by the Taliban, ISIS and the Wahabis.

What I wonder about is this, if a man is raping his own wife, how can that ever nurture a happy, sustainable marriage. He's killing the very thing that is keeping him in balance. See how men start heavy drinking and going insane when the very marriage he destroyed with his 'needs' ends?

I simply cannot believe that in the 21st. century, there are still Bahamians, other than Rodney Moncur, who believe that it is OK for a man to have sex with his wife against her will. It is never OK! No simply means "HELL NO!"

Do you believe that there are still women who are raping Bahamian men's pockets???? ........... But that is not cool to discuss with the feminists.

Oh the comedy. When the marriage is considered a "piece a paper and a piece a jewelry"