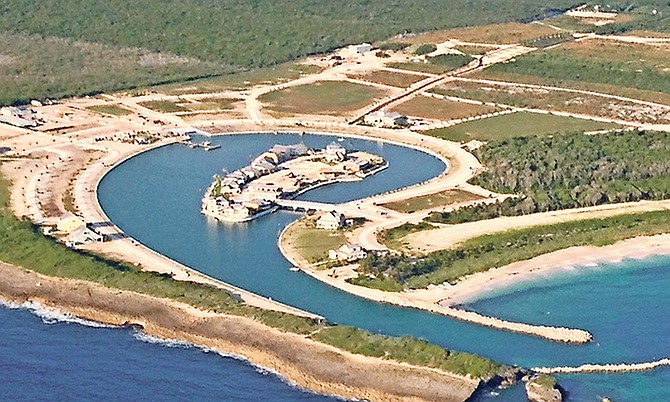 Carl Bethel QC confirmed to Tribune Business he had asked his director of legal affairs for "advice" over claims that the 220-acre south Abaco project is breaching the Real Estate (Brokers and Salesman) Act by running its own property sales, management and vacation rental business. Documents obtained by this newspaper show the Minnis administration has been urged to intervene and "take action", after Schooner Bay and its principals seemingly ignored multiple demands from the Bahamas Real Estate Association (BREA) and others to stop breaching local laws.

Evidence in this newspaper's possession also reveals that the developer has sought to eliminate competition from Bahamian realtors by shutting them out of Schooner Bay, in a bid to bar them from re-sale and vacation rental business generated by the project's homeowners.

It has sought, in particular, to drive out Destination Schooner Bay (DSB) and its principal, licensed realtor James Malcolm, resulting in several legal battles now before the Supreme Court.

The latest plea for government intervention came from Mr Malcolm's attorney, Jason Maynard, who in an October 11, 2017, letter to the Attorney General called on the Government to "take action" and ensure Schooner Bay complies with Bahamian law.

Pointing to two 'live' Supreme Court actions relating to Schooner Bay's real estate practices, Mr Maynard wrote: "They have a common thread, which is that although Schooner Bay Ventures [the developer] is not licensed under the Act to engage in the practice of real estate business in the capacity of a real estate broker or real estate salesman, it nonetheless has been unlawfully engaging in such practices."

Mr Maynard said the Real Estate (Brokers and Salesman) Act stipulated a $3,000 fine, or 12-months' imprisonment, for persons acting as a broker or salesman without a valid licence. He said Schooner Bay Ventures had been sent at least five letters warning it about its violations of Bahamian law.

"Schooner Bay Ventures has been warned in writing by several attorneys and the Bahamas Real Estate Association," Mr Maynard told Mr Bethel, "against engaging in such practices without a licence; that it should cease and desist from interfering with the legitimate business activities of DSB and Mr Malcolm; and that should they fail to cease and desist, then the appropriate action would be taken against them.

"Notwithstanding the warnings contained in the foregoing letters, Schooner Bay Ventures has failed to cease and desist from engaging in the practice of real estate business," Mr Maynard continued.

"Furthermore, they seek to prohibit licensed Bahamian brokers and salesmen from engaging in real estate re-sale activity in Schooner Bay, whilst they themselves and/or through their servants or agents unlawfully engage in the property and rental management business for privately-owned homes and cottages at Schooner Bay contrary to the terms of any developer license they may have obtained.

Tribune Business understands that Schooner Bay and its attorneys are vehemently denying any breaches of the Real Estate (Broker and Salesman) Act. Indeed, a June 9, 2015, letter from Mr Maynard to Schooner Bay's attorneys notes the "assertion that your client is compliant with the requirements" of the Act in relation to its developer's licence.

However, Dr David Huber, Schooner Bay's principal, who made his multi-billion dollar fortune from patenting fibre-optic technology, declined to comment when Tribune Business questioned him over the real estate allegations.

"I can't comment because it's in litigation," he told this newspaper, employing the defence previously used over concerns that Schooner Bay has also breached the terms of its 100-acre Crown Land licence by evicting Bahamian entrepreneurs from the property.

Mr Bethel, meanwhile, confirmed he had referred Mr Maynard's letter to his director of legal affairs for a determination on how the Government should respond.

"On November 22, a letter from [Jason] Maynard was noted by me and sent to the director of legal affairs for advice," Mr Bethel said, recalling that while BREA had expressed similar concerns it had yet to file an official complaint with the Attorney General's Office.

"BREA did complain about it; not officially but in discussions," he added. "There was a verbal complaint, but a formal complaint would cause us to look to see what powers we have under the Act. I think it's initially for them to assert their rights, and they'd have to send me a formal complaint."

The key issue is that foreign developers, under the Real Estate (Broker and Salesman) Act, can only sell and manage the real estate that they own. Once such property is sold to third-party buyers, the Act prevents them from engaging in re-sales of that real estate, and operating their own property management/vacation rental businesses.

In Schooner Bay's case, it has only sold lots to home buyers who were then responsible for vertical construction on their properties. Thus it cannot get involved in managing these homes and/or renting and leasing them out.

Both BREA's current and immediate past presidents yesterday confirmed that the Schooner Bay developer was breaching Bahamian law by engaging in re-sales and property management/vacation rentals.

Christine Wallace-Whitfield, the current office holder, said: "They're not allowed to engage in re-sales. A developer cannot resell their own property. Once they've sold it, the property cannot go back to the developer.

"The owner has to contract a licensed Bahamian realtor, brokerage firm, to represent them in selling their property. They [the developer] shouldn't do that."

Carla Sweeting, her predecessor, said Schooner Bay had rejected BREA's warnings that it was breaching local law. She added that Tina Gascoigne, its general counsel, had even informed the Association that the project would "run circles" around BREA and the real estate legislation.

"As far as I remember, they were in violation of the Act and refused to do anything about it," Ms Sweeting told Tribune Business of Schooner Bay's response to the Bahamas Real Estate Association's (BREA) concerns. "I told them: 'You can't break these laws and think we'll be OK with it'.

"The Act is very clear. The developer's licence is very clear: That a developer can only sell or lease land which it is the owner of. It cannot engage in re-sales, marketing and property management."

Schooner Bay Ventures has made no secret of its ambition to engage in this business despite the potential for violating Bahamian law. A letter sent to Mr Malcolm exactly four years ago by Ms Gascoigne, Schooner Bay's general counsel, said bluntly: "We will be launching our own property management/vacation rental business to service Schooner Bay clients and buyers."

Ms Gascoigne, in an April 17, 2015, letter to Mr Malcolm, suggested he was in breach of these stipulations. She added: "Schooner Bay Ventures is the only entity with the exclusive authority to operate real estate sales, rental or management offices at Schooner Bay.

"We therefore immediately demand that you cease and desist the operations of DSB Bahamas at Schooner Bay or in connection with any home at Schooner Bay.... Do not hold yourself out as being able to provide rental or property management services at Schooner Bay."

Many observers will likely interpret this as unwarranted interference with Mr Malcolm's business, anti-competitive and restraint of trade, compounding Schooner Bay's original violation of Bahamian law by excluding local competition.

This prompted an intervention by BREA on Mr Malcolm's behalf 10 days later. However, tensions continued between himself and DSB on one side, and the Schooner Bay developer on the other, prompting Ms Sweeting - BREA's then president - to again write to Ms Gascoigne on June 24, 2016.

"It has come to our attention that you are continuing to insist that BREA members who hold a broker or salesman's licence, and in particular James Malcolm, cannot engage in the practice of real estate as it relates to re-sales, property management or rentals in Schooner Bay as per the Real Estate (Broker and Salesman) Act," Ms Sweeting wrote.

Pointing to the Act's stipulations, she told the developer: "A developer's licence does not grant the holders of such licence [the right] to engage in the practice of any re-sales or any other real estate transactions.

The battle between Schooner Bay and Mr Malcolm is now being played out before the Supreme Court, with the developer alleging that he has "unlawfully interfered" with the project's business activities, causing it loss and damage.

Mr Malcolm, who declined to comment, is defending the developer's claims vigorously, and it is understood a verdict is expected soon. Ms Sweeting said BREA supported Mr Malcolm, but had received legal advice that it should not participate in the case or launch an action itself against Schooner Bay, and instead should "report" the matter to the Attorney General.

"We have requirements as to who can hold a developer's licence," she said. "You have to be a shareholder, be a Bahamian, and they were trying to get a foreign woman [Ms Gascoigne] who is their attorney to hold the licence, and couldn't.

"Then the problem is they were still not having Bahamian realtors in there... They wanted Tina Gascoigne to be the one, and we argued she was not a shareholder; she simply was an employee at Schooner Bay acting as their attorney."

Ten days after Schooner Bay's April 2015 warning to Ms Gascoigne, BREA and Ms Sweeting informed the developer: "I would like to draw your attention that Schooner Bay Ventures is not in possession of a valid developers' licence with the Bahamas Real Estate Association, as per the Act.

"We have spoken to [your attorneys] on several occasions by telephone as well as e-mail, and have yet to receive any documentation on behalf of Schooner Bay Ventures to make the development compliant in accordance with the Real Estate (Broker and Salesman) Act.

Documents obtained by Tribune Business show that on this occasion Schooner Bay responded with remarkable speed to BREA's warning. A June 9, 2015, letter from Mr Malcolm's attorney, Mr Maynard, refers to Schooner Bay Ventures' developer's licence being granted on May 21, 2015, "almost four weeks after" letters sent to it by BREA and himself.

Ms Sweeting yesterday said she was unable to recall whether Schooner Bay Ventures' developer's licence is current. Mrs Wallace-Whitfield said she would check, but did not call back or respond to further messages before press time last night.

How dare this developer provide a better and cheaper service than the Bahamian Real Estate Association??!! Do they not realise that fleecing of foreigners is a God Given Right of Bahamian Realtors and that Moses himself brought down that Commandment, which was on the third tablet, which he accidentally dropped and broke, but is nonetheless the Word of God?!!

How are Bahamian Realtors supposed to make a modest seven figure annual income (OK, sometimes 8), tax free, if they cannot steal...pardon me, charge foreigners exorbitant fees to first purchase in these islands and then sell at whatever price just to get out of here and never return?