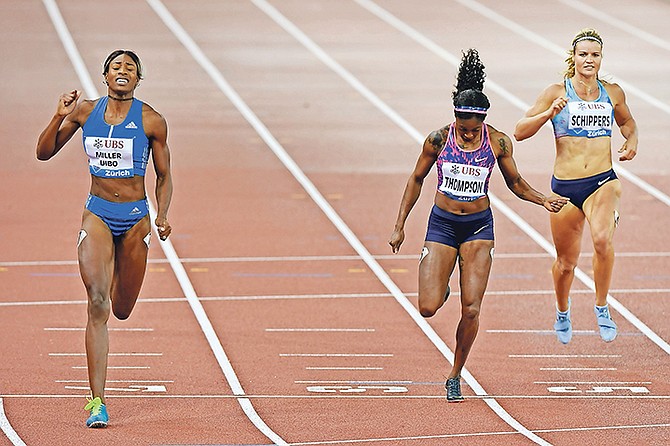 SHAUNAE Miller-Uibo fell short of her attempt at a rare 200/400 metre double at the International Amateur Athletic Federation World Championships, but she retained her Tribune Sports' Female Athlete of the Year honours.

In what has been another sensational year for the 23-year-old leading lady, Miller-Uibo began by walking down the aisle in an elaborate ceremony at Atlantis where she wed her college sweetheart Maicel Uibo, a decathlete from Estonia.

The officiant was Apostle J Rodney Roberts, of Five Porches Ministries, assisted by Prophetess Janice McKenzie, who had predicted that the Bahamian track star would win Olympic gold in 2016. Shaun Miller, her father, gave her away.

With the ink still setting on her marriage certificate, Miller-Uibo skipped her honeymoon to head to New York City the following weekend where she picked up the victory at the 110th edition of the Millrose Games at the Armory's New Balance Track and Field Center.

On Saturday, May 27, Miller-Uibo was runner-up to her American training partner Tori Bowie at the IAAF Diamond League's Prefontaine Classic on Saturday in Eugene, Oregon, where she ran a national record of 21.91 seconds in the women's 200 metres.

In the process, Miller-Uibo improved on her previous national record of 22.05 that she ran on June 11, 2016 at the Jamaica's National Racer's Grand Prix in Kingston, Jamaica.

At the Adidas Boost Boston Games on an elevated straight track constructed between Boston Common and the Public Gardens, Miller-Uibo sped down Charles Street to ink her name as the first Bahamian female to hold a world record in an athletic event.

Miller-Uibo posted her winning time of 21.76 seconds to erase the previous straight world record held by her American arch-rival Allyson Felix of 22.55 that she established in Manchester, England, on May 15, 2010.

In what was expected to be the crowning of her young professional career, Miller-Uibo was hoping to up the stakes at the IAAF World Championships in London, England in August with a 200/400 triumph.

But after fading from glory to a disappointing fourth place in the final of the marquee 400m in the last 50m, Miller-Uibo returned two days later to getting on the podium with a bronze in the 200m.

Closing out her year in Europe in September, Miller-Uibo emerged as the first Bahamian to cash in on two year-ending finals, surpassing Tonique Williams, whom she joined (as the first to win a Golden League title as it was back then in 2004) when she captured the first title in a national record breaking performance in the women's 200 metres at the Zurich Weltklasse.

The Grand Bahamian came into her own in her second season in the Women's National Basketball Association with the Connecticut Sun and her performance enabled her to earn the runner-up spot on the Tribunes list.

The 23-year-old 6-feet-6 forward/center helped to power the Sun into the WNBA playoffs as the fourth seeded team, only to be eliminated by the Phoenix Mercury.

During the course of the regular season, Jones was selected to the Eastern Conference's team for the WNBA All-Star Game on July 22 at the KeyArena in Seattle, Washington where she was awarded near the end of the game with a slam dunk.

The highlight of her season came as she finished with an averaged double-double in points and rebounds and also averaged career-highs in scoring, rebounding and blocked shots, quickly emerging as one of the rising young stars in the league.

She also shattered the single season record for rebounds, grabbing 403 rebounds in the 2017 season, surpassing Tina Charles' previous record of 398.

For her efforts, Jones was named the 2017 WNBA Most Improved Player.

With the season completed, Jones took her talent to China where she is currently averaging 25.7 points and 18.1 rebounds per game for the Shanxi Xing Rui in the Women's Chinese Basketball Association.

Congratulations Mrs. Miller-Uibo. Been following you since Carifta, keep it up. Such a pity you children will not be Bahamian citizens automatically.