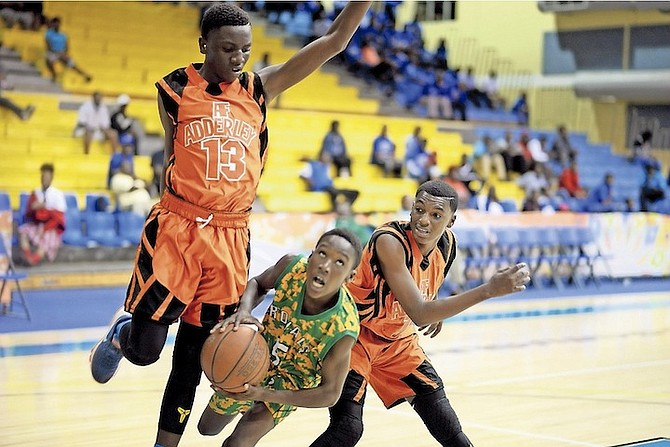 In the late game, the CC Sweeting Cobras and the Anatol Rodgers Timberwolves played in game one of the senior boys’ series, but the result was not available up to press time. The game was played just before the official opening ceremonies and after the three other divisional matches took place.

In the earlier games played, the Lions opened defence of their junior girls’ title by nipping the pennant winning SC McPherson Sharks 39-38; the defending champions and pennant winning Pitbulls bite the AF Adderley Fighting Tigers 78-54 and the Mystic Marlins held off the CI Gibson Rattlers 48-46.

GSSSA president Varel Davis said after an exciting sudden death playoffs last week, they are happy to get the championship off to such a great start.

“I’m happy to see that we have some new faces in the championship,” she said.

“This is the first time in the school history that Anatol has made it this far. Although CC Sweeting has won the Hugh Campbell Championships, they have never won the GSSSA title. So both teams are fighting for something this year.

“In the senior girls, we have CI Gibson playing for their first title too, so it’s so good to see them there. It will be interesting to see how they all finish this year. Of course, we have teams like DW Davis and HO Nash, who have proven to be tough to beat in the past, back in the junior boys’ and girls’ finals. So it’s going to be exciting to watch them.”

Davis said the GSSSA got off to a pretty good start last week when they hosted the playoffs with the undefeated pennant winning CI Gibson Rattlers and the defending champions Doris Johnson Mystic Marlins both getting eliminated. She noted that the playoffs have set the tone for a keenly contested championship.

Pitbulls 78, Fighting Tigers 54: AF Adderley didn’t have any answer for Roscoe Dean, who exploded for a game high 32 points to lead DW Davis to the opening win in the junior boys’ series. Dean had 10 points as the Pitbulls opened an impressive 29-17 first quarter lead and they never looked back.

Maxim Francois added 16 points, Deangelo Foulkes and Aaron Brown both had eight and Kenvon Farrington chipped in with seven.

After taking the 12-point lead in the first quarter, DW Davis extended their lead to 44-26 at the half and increased it to 62-44 at the end of the third.

Kemron Grey scored 27, Rayvon Pinder had 16, Rontae Lloyd five and Alexander Joseph four, but it wasn’t enough to get the Fighting Tigers back into the game.

Mystic Marlins 48, Rattlers 46: Tanea Bowleg had a side high 16, including eight in the fourth and Briontae Riley added 13, four in the fourth as well as Dame Doris Johnson managed to stage a late comeback to seal the win.

The duo was assisted by Kavanique Rolle with seven and Thyrell Thompson with four. The Mystic Marlins led 14-9 at the end of the first quarter, but they trailed 25-26 at the half. They stayed behind 30-36 after three, but made their gallant comeback in the fourth.

Rose Johnson also had a side high 16, while Latavia Branyen had 12, Monica Cleary nine and Jetane Trembley five in a losing effort for CI Gibson.

Lions 39, Sharks 38: Adalia Tuckers only had four points, but one of them coming on a free throw was enough to snatch a close victory for HO Nash in the junior girls opener.

Glennia Sands, who got of to a slow start going scoreless in the first quarter, came up with a game high 21 points to lead the Lions. Calvanique Spence and Sidneya Hilare both contributed five and Jaynae Newry chipped in with four.

D’Syaha Cooper and Bronika Alexus both had 11, Michelle Butler had seven and D’Shante Cooper added five in a losing effort.