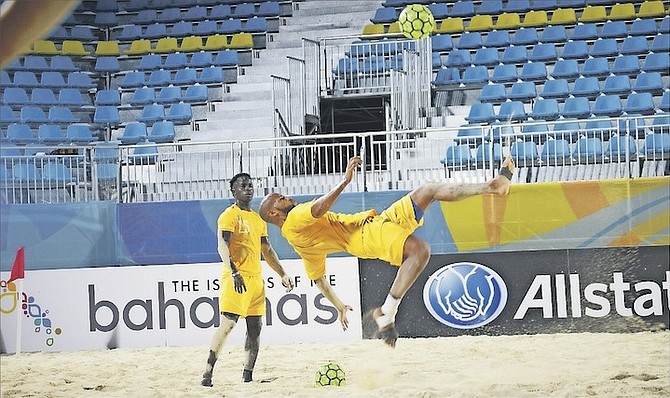 The Bahamas is set to square off against the top teams in the region on the beach soccer pitch as they vie for a spot in the FIFA Beach Soccer World Cup 2017.

Competition begins today in the Confederation of North, Central America and Caribbean Association Football (CONCACAF) Beach Soccer Championship and Bahamian national team head coach Alexandre Soares said the side is eager for an opportunity to represent the country on the highest stage.

The Bahamas faces Guyana 8pm tonight in the national beach soccer facility at the foot of the Sir Sidney Poitier Bridge.

“The guys are ready. The guys understand the system, the guys want to play well for their country and I’m happy with their progress so far,” he said. “We started with our programme on December 15, and I think the team has improved tremendously in the tactical aspect. We have good players, the players have good potential and techniques. But the team needed to improve in defence and the tactical aspect of the game, so in those two months we worked hard on that tactical aspect to improve the system of our game and I believe it will pay dividends on the pitch.”

Soares, a native of Brazil and currently the technical director and head coach of the Soccer 7 Academy in Miami, Florida is also a former pro player with Brazilian club Fluminense FC. He was also a former soccer and pro futsal (indoor soccer) player for eight years in Spain.

In January, The Bahamas participated in the Copa Deportes Nacion against Mexico and Argentina in an effort to prepare for the tournament.

Last summer, The Bahamas also travelled to Europe for a six-week training camp and a series of tournaments.

They recorded several marquee wins during that stretch, highlighted by a 5-4 win over the No.15 ranked United States. It was the Bahamas’ first beach soccer win over the U.S in the country’s history.

“They did well in Europe, but with another coach. With me we played the two games in Argentina against Argentina in Mexico. That was a good opportunity because the group was able to put into practice what we were working on,” Soares said, “This CONCAF event this week is a very difficult tournament because of the high level of the teams. There are some very strong teams but we will absolutely our best.”

“For me, of course I would have wanted more time with them, but logistically it was not possible. I think one year to work with the team and train would have been ideal. We would have been able to improve in all the physical aspects, tactical aspects and techniques and have time to play more friendlies, which are important for development. With me the team played only two friendlies – which is not enough – but the CONCACAF tournament is an incredible opportunity,”Soares said, “We are already through to the World Cup because we will have a minimum of six games. Six games against these top teams will let us know where we are and what we will have to adjust and improve on headed into the World Cup.”

For the first three days of the tournament, the Bahamas will close out competition, headlining the 8pm feature game on the schedule.

The CONCACAF Beach Soccer Championships will be contested February 20-26 and the Bahamas was drawn in Group A along with Jamaica, Belize and Guyana.

On February 21 they will face Belize and will close out play in the group phase the following day with a matchup against Jamaica.

The USA will face Trinidad and Tobago in the 8pm feature on day four.

Play during the group phase will kickoff at 1:45pm with six games on the schedule and the final game beginning at 8pm.

The quarterfinals begin February 25, followed each subsequent day by the semi-finals and finals to conclude the week-long event.

In the playoff rounds, play will begin at 11:15am each day.

According to the latest Beach Soccer Worldwide rankings, the Bahamas is the top ranked team of their group within the region at No.6 in CONCACAF and No.55 worldwide.

Jamaica is ranked No.8 in CONCACAF (65th overall), Belize is No. 16 (92nd overall) while Guyana is presently unranked.

The tournament champion and the runner-up of the will join host Bahamas as the three CONCACAF representatives in the FIFA Beach Soccer World Cup 2017. If the Bahamas reaches the final, the World Cup spot will be allocated to the next best placed team.

In addition, the tournament will also serve as a test run for the upcoming Beach Soccer World Cup, April 27-May 7.

Each one of the 16 participating member associations are guaranteed to play six games, with all competing for final tournament placement, until the last match date.

The Bahamas last hosted the CONCACAF Beach Soccer Championships in 2013 where they finished sixth following a loss to Guatemala in their tournament finale.