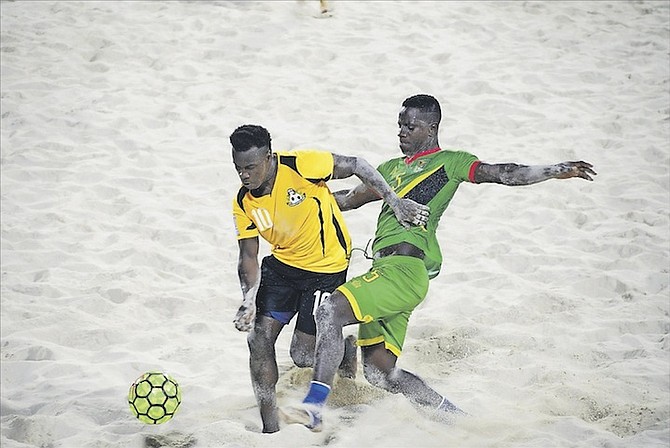 The Bahamas men’s national team gave the home crowd of eager spectators the opener they were hoping for and set the tone for the remainder of  Confederation of North, Central America and Caribbean Association Football (CONCACAF) Beach Soccer Championship.

Lesly St Fleur recorded a hat trick and Kyle Williams answered Guyana’s only goal of the game as the Bahamas earned a 4-1 win over Guyana in the day one finale last night at the national beach soccer facility.

St Fleur, who scored two of his goals in the first period, said the team was inspired by the home crowd but is mindful that a good showing at CONCACAF is key for the ultimate goal of performing well at the  FIFA Beach Soccer World Cup 2017.

“We played well but there are always improvements in getting ready for the World Cup. Coming out and putting on a good performance in game one was key for us. We have to come back out and play the same type of game we played to keep this going,” he said. “I’m the team’s leading scorer, there’s a lot of pressure on me but I’m ready for that. As a team leader you have to go out there, play with heart and lead with example.”

In the first period, The Bahamas’ Gary Joseph drew an interference call when he attempted an overhead kick for the side’s first real scoring opportunity, but Guyana’s Ethan Sparman was able to come up with the save.

The Bahamas was the aggressor early on with three shots on goal within the first three minutes of play.

Nursing a 2-0 advantage, the Bahamas controlled the pace of the game, and escaped several near scoring opportunities from Guyana Jashuan Moore’s strike just missed left, Jamal Haynes’ free kick ricocheted off the crossbar, and Bahamas goalkeeper Ivan Rolle kept the opponents scoreless with an incredible save on the another free kick from Deshawn Joseph.

Rolle, the youngest player on the team at 20-years-old,delivered an impressive performance protecting the  goal.

“I think the jitterbugs are out for me. It was my first tournament, but after this game now I’m ready to move forward and continue playing my role in helping this team win,” he said, “We want to show the world that we deserve to be in the World Cup, not just have the easy path so it is major for us to gain everyone’s confidence moving forward. It was a great turnout, thanks to everyone at home for making this atmosphere possible.”

In the third period, Rolle delivered a perfect throw in to St. Fleur, who was unpressured and made another bicycle kick for a 3-0 lead with 10:08 left to play. Guyana scored on a great individual breakaway effort from Joseph. But the Bahamas would expand on the 3-1 lead and put the game away when St.Fleur delivered a cross and Williams finished with a header at the 4:41 mark.

The Bahamas will face Belize - who beat Jamaica on penalties after finishing level at 5-5 - tonight at 8pm as Group Stage play continues.