$35,000 Awarded In Lawsuit Over Policeman Assault 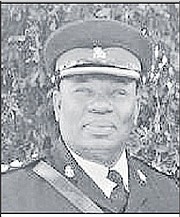 A LAWYER who refused to submit to measures at the Magistrate’s Court complex requiring body searches for contraband was yesterday awarded $35,000 in a civil suit against Commissioner of Police Ellison Greenslade and the Office of the Attorney General, concerning an assault on him by a senior policeman at the facility five years ago.

Calvin Seymour alleged that Superintendent Oscar Sands, now deceased, assaulted him on March 29, 2012 and on April 3, 2012. On the initial occasion, Sands allegedly poked Mr Seymour in the side with his cane in front of his clients and members of the public and threatened to arrest him if he refused to submit to a personal search. On the second occasion, Sands allegedly forcefully tried to prevent Mr Seymour from entering court nine.

Mr Seymour had sought general damages, exemplary damages, interest, further or other relief and costs as a result of the incidents.

On April 3, 2012, Mr Seymour entered the court and Sands allegedly pulled him away and told him he was under arrest. Asked the reason for his arrest, Sands allegedly told Mr Seymour that he suspected him of “carrying stuff”. Mr Seymour, a former assistant superintendent of police, said that no other attorney was subjected to the same treatment.

The latter pair said they were at the court complex on March 23 and they saw Mr Seymour bypass the walk through metal detectors and refuse to have his bag searched. Mr McCartney said that Mr Seymour’s conduct stood out to him because he did not submit to the security protocols as other persons.

In his ruling yesterday, Senior Justice Stephen Isaacs said that based on the evidence: “I find on a balance of probabilities that the evidence of the plaintiff is to be preferred.

“The minute (report) by Sands does not carry much weight given the other evidence. There does not appear anywhere in the evidence presented by the defendants any suspicion that the plaintiff was committing a crime worthy of being searched or arrested.

“The evidence of McCartney and Bethel on behalf of the defendants did not add any weight to the minute of Sands as neither was an eye witness to the alleged assault and neither were in earshot of the plaintiff and Sands when words were exchanged. I accept that the actions of Sands towards the plaintiff took place among members of the public and naturally caused the plaintiff embarrassment given his role as counsel,” the judge noted.

The judge in a ruling handed down yesterday found that “what the plaintiff prays for is open to interpretation.”

“I can only assume that the plaintiff is seeking general damages for assault, battery, unlawful arrest, unlawful search and false imprisonment even though the prayer does not spell it out,” the judge noted.

“Reliance on Merson v Cartwright [1994] BHS J number 54 does not assist the plaintiff. The facts in Person were far more extreme than in the instant case. Merson, a female, was locked in a cell with men and treated with contempt. Her gender and medical condition exacerbated the circumstances,” the judge added.

“The circumstances in the present case come nowhere close to that level of seriousness. In any event the prayer in the instant case for general damages in a generic sense cannot yield as a result, as it is not specified which of the five complaints listed above is the plaintiff relying on to secure damages.”

Senior Justice Isaacs noted: “The claim for exemplary damages is more clear from the facts as the plaintiff is an officer of the court and was humiliated by the actions of Sands.”

“The case of Tynes v Barr [199] 45 WLR7 demonstrates that counsel, by weight of his profession, ought to be given exemplary damages to discourage this kind of conduct exhibited by Sands from being meted out to any other counsel,” the judge stressed.

“Given the limited amount of contact and the brevity of the incidents described by the plaintiff, an award of $35,000 is made to the plaintiff representing exemplary damages,” the judge ruled, adding that interest “is to run from the date of judgment until payment at six percent.”

Senior Justice Isaacs also awarded legal costs to Mr Seymour “to be taxed if not agreed.”

Days after the second incident, when informed of the civil suit being lodged, Supt Sands told The Tribune that he did nothing wrong and was only being professional.

“If he feels like I assaulted him and wants to take it to court, then that’s his right. I try to be professional in my duties and my conduct so I don’t know about that,” Supt Sands told The Tribune in 2012.

At the time, Supt Sands said he was going to “continue to make people coming to the court feel safe” by carrying out his duties to the fullest as the officer responsible for the new facility.

He said: “If someone gets hurt coming into this building because we the police didn’t do our jobs properly, then that will be on us.”

Mr Seymour was represented by Gia Moxey while David Higgins appeared for the defendants in the civil action.