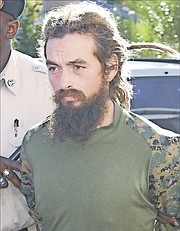 FRIENDS of a former US marine they believe was unfairly tried and convicted for attempted murder are raising funds to cover the legal costs that would allow the ex-soldier to contest his conviction in the Court of Appeal.

John Heath Henry, who has American and Bahamian citizenship, was convicted by a Supreme Court jury in March 2016 concerning the shooting of Jonathan Rahming on December 30, 2014 at Current Island, Eleuthera.

He appeared before Justice Bernard Turner four months later in July and was subsequently sentenced to 15 years in prison for the incident.

He was advised of his right to appeal both conviction and sentencing, which Travis Granfar, a US based attorney and personal friend of Henry, is seeking help to do according to a StartSomeGood account set up to raise $7,500 by the end of the week to retain new counsel to argue the appeal.

“Myself and three other Baha’i attorneys, including highly experienced criminal defence attorneys, have reviewed John’s case and believe he did not receive a fair trial under Bahamian and international law,” Mr Granfar said in the project description.

“I am working with John’s family to appeal his conviction and have launched this campaign to help his family raise money to retain competent counsel in the Bahamas for John’s appeal.

“I knew John during his time volunteering for the Junior Youth Spiritual Empowerment Programme organised by the Baha’i community in the Bahamas. I spent many months working alongside John and know him to be a kind, humble, honest, self-sacrificing soul.”

The US attorney contends that his friend’s case has strong grounds for a successful appeal, saying: “John’s lawyers presented no evidence, called no witnesses and gave John contradictory advice.”

A police search team found Henry hiding under a Ghillie blanket - a type of camouflage - on a cliff on Current Island on January 2, 2015. He allegedly told police that Rahming charged at him while wielding a cutlass and he shot him in self-defence. When asked for the location of the gun, Henry said that he had thrown it in a swamp.

He elected to remain silent at trial and called no witnesses in his defence.

Justice Turner, in giving his ruling on sentencing, said he had considered the favourable probation report and character witness testimonies as well as the relative youth of the convict.

“But I also have to impose a sentence sufficient to express society’s intolerance and abhorrence for violent and criminal activity, in particular criminal activity involving the use of a firearm,” the judge stressed.

The judge recalled evidence that Henry tried to evade arrest and was only caught by police when they detected movement in the area in which he had camouflaged himself.

“This matter is a somewhat inexplicable incident as the attempt on the life of Jonathan Rahming, by a person who he considered something of a friend, other than a previous incident according to the evidence, came entirely out of the blue,” the judge added. “The only explanation for which he was, according to John Henry, the convict’s reference to Jonathan Rahming having beat him up some eight years earlier.”

The incident eight years prior to the shooting at Current Island concerned Henry’s alleged attempted theft of Rahming’s billy goat where the victim reportedly struck Henry before turning him over to his guardians.

Henry was sentenced to 15 years imprisonment from the date of conviction, March 23, 2016.

He was told that if he maintains good behaviour at the Department of Correctional Services during his incarceration, authorities at the prison may release him after having served two thirds - 10 years - of his sentence.

The StartSomeGood online account titled “Fair Trial For John Henry” had raised $5,840 from 44 supporters up to press time.