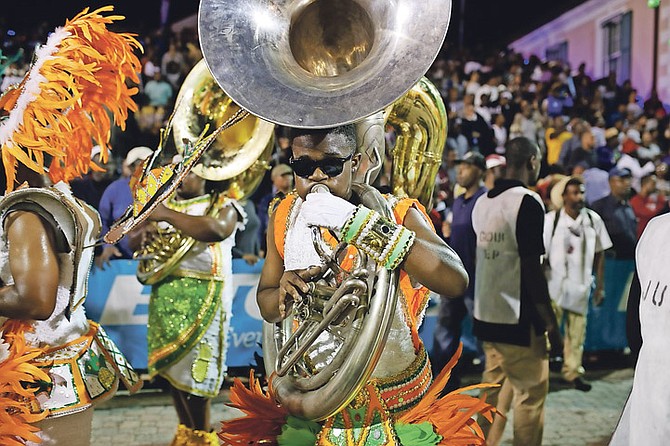 Roots were declared the official winner of the New Year's Day parade.

THE Valley Boys Junkanoo group is taking legal action against the Junkanoo Corporation of New Providence (JCNP), amidst revelations that the Roots Junkanoo group have been declared the official winner of the New Year's Day Junkanoo Parade.

JCNP Chairman Silbert Ferguson told reporters on Friday that the change was due to an error in allocating the appropriate penalties, adding that attorneys representing the Valley Boys informed him by letter that the group is "going to proceed with legal action" against the JCNP.

Mr Ferguson did not specify why the Valley Boys have decided to take legal action, only that it was "in reference to the New Year's Junkanoo Parade".

The Valley Boys had previously been declared the unofficial winners of the parade.

At Friday's press conference at JCNP headquarters, Parade Management Team (PMT) Chairman Anthen Mortimer announced that Roots, with an overall positioning score of 81.58, and a 1.33 point penalty, were the official winners of the New Year's Day Junkanoo Parade.

Genesis Warhawks came in fifth with 67.96 points and a 5.50 point penalty.

Mr Ferguson explained on Friday that Roots initially received fourth place after being assessed a penalty of 6.33 points, which he said came from "two persons carrying a costume. Mr Ferguson said that the judge that issued the penalty "did not register the costume or the costume name, they just gave them a penalty."

However, Mr Ferguson said that unless officials are able to identify the costume in question, the penalty would have to be removed.

Nonetheless, Mr Ferguson said the penalty that was levied against Roots is referred to in the JCNP as an Individual Penalty (I-Penalty), which would not affect the group in its entirety. If it did, he said it would then be a Group Penalty (G-Penalty).

However, he said that the I-Penalty was "moved from the I-position to the group position", thus affecting Roots directly.

"So it moved, the Roots group originally if you look at the scores, you can basically see here that Roots has won the raw score," Mr Ferguson said, adding, "82.92, that is the initial score of all the groups before any penalties. They won the parade. But when you give them a five point penalty, a 6.33, they drop to fourth. Now the (Independent Review Committee) adjudicated and they removed the penalty, and once they removed it it pushed them back where they were supposed to be.

"And thats why all of the other groups don't have a challenge because all of the groups saw it the same time. It was an I-Penalty and everybody knew it.

"The reason we could not go and move the penalty, is because once the unofficial results are read, the only way for you to change them is to protest them, which they did – they protested and that is going to take us to January 15. And so it's unfortunate that that has happened, because an I-Penalty, it would have gone against the costume.

"Whoever the costume is, if they were winning and they lost five points, then they don't win. But that five points in the costume context, would have only probably moved .25 points away from that group in that bracket, because its only five per cent. But when you move it directly from the group, one point matters in these parades. If you could see these scores, these are 80, 81, 82, 83. One point eats you up.”

Indirectly addressing the decision by Valley Boys to take legal action against the JCNP, Mr Ferguson insisted that the JCNP is confident in the transparency of its modus operandi, pointing to the JCNP's accommodation of all Junkanoo groups in its decision making process, as well as the establishment of an Independent Review Committee to review the JCNP's rules and procedures, as well as adjudicate disputes.

"Every Junkanoo group is a member of the Junkanoo Corporation," he said. "We all participate at this level. There is no rule that leaves this table unless all of the groups agree. Our parades cannot start unless all of us agree.

"…This is a process," he added. "We don't just jump up and say this is it, that is it. We don't go in a back room and do this. Every Junkanoo group has observers at every point in our parades. They have observers at the gates to observe what is going on in other groups, they have observers in the tally room when they add up all the scores, so everybody is privy to the information.

Mr Ferguson said: "This is the first time in Junkanoo history over the last seven years that groups have the ability to see everything. But at the end of the day we still have disputes. Our job moving forward is as we finish every parade season, we try to make ourselves better for the next season.

"Last year, most of you will be aware that the JCNP spent nine months in the court of law with the Roots Junkanoo group, so this year we put on our battle gear again to sit again. We are very confident in our rules and the way that they were administered, and all of the groups sitting here know that they were administered properly. Now if they have some irregularities, it's our job to get back here and straighten out the irregularities."

However, Mr Ferguson seemed to take exception to the Valley Boys' decision to pursue legal action against the JCNP, suggesting that groups facing the same issues the Valley Boys are facing with the JCNP still manage to "win with this same system."

"Groups that have a challenge, these groups win with this same system," he said. "You could win up to five, six, seven parades in this same system. But when you lose it's a challenge. I have a problem with that. I understand clearly the emotions of Junkanoo. I am a 46-year veteran. I have been through all of the levels of Junkanoo.

"I understand the emotions, and especially when you have been declared the unofficial winner and there is an error. And I just want to say that the JCNP takes a lot of heat because we are ultimately responsible. But I think this year we will expose all of what has caused us to get to this point. I think its time that we stop taking all the hits, and the persons who sit and make these decisions, I think we have to make them accountable to the public. Because what has transpired, what is happening right now should have never happened."

Comrades! And.... where will the funds come from to pay the lawyers?

Hahahahahahahahahahahahaha. . .ya mean we have to teach semantic in them Junkanoo shacks too? But I guess dem VB really taking the word on the streets serious. . ."look like the PLP loosing everything aye". . .lol! The results were "UNOFFICIAL" DUDES. . . it means that they were "NOT FINAL". . .and subject to change! Lol!

And we all know Crooked Christie will make sure his Wicked Witch Attorney General (the very despicable Allyson Maynard-Gibson) puts the fix in on the outcome of this legal action with one of her favourite judges!