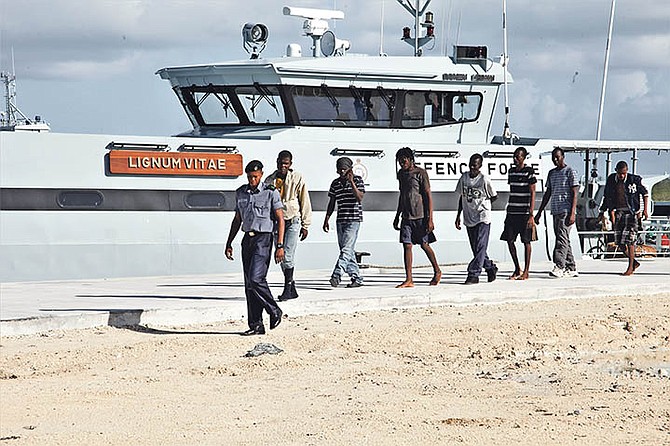 A marine escorts Haitian migrants off the patrol craft HMBS Lignum Vitae at the Coral Harbour Base shortly after they were apprehended early Monday morning. They were discovered in the central Bahamas on July 3. Photo: RBDF Public Relations Department

MORE than 60 undocumented Haitian nationals were apprehended in the central Bahamas early Monday morning by the Royal Bahamas Defence Force.

A Haitian sloop was intercepted on the Great Bahama Bank west of the Exuma chain by Her Majesty’s Bahamian Ship Lignum Vitae under the command of Senior Lieutenant Bertram Bowleg around 2am on Monday morning. The vessel was subsequently boarded and searched resulting in 69 migrants (58 males, ten females and a child) being apprehended.

The wooden vessel was initially sighted by a RBDF surveillance aircraft piloted by Chief Petty Officer Gregory Storr earlier that day when HMBS Lignum Vitae, which was on routine patrol at the time, was directed to intercept.

The migrants were taken to New Providence and turned over to immigration officials for further processing.

How were they able to get so far north in Bahamian waters? Why were they not intercepted earlier or, better still, turned back to Haiti?

The question that's been asked for the last 20 years.

Has anyone ever answered? Or is the answer still blatantly in our faces? People in high places have corrupted the interception process.

Economist, it doesnt matter how far north they get. If they run out of fuel in Inagua we provide them free transportation to Nassau (like the article says in this case) and their photos are taken on ship and their new Bahamian passports are waiting for them at the Coral Harbour base when they arrive.
You and i have to wait 8 weeks for ours.

Why can't we just deal with them like Turks and Caicos and just tug boat style push the boat and people out of the country and let it sink??

The Bahamas must adopt a zero tolerance to illegal migration. These people take us for jokes and fools. They all have contacts here and should be interrogated to determine who these contacts are.

Anyone found facilitating or aiding illegal migrants should themselves be deported if of foreign nationality regardless of status in our country or jailed if they are Bahamians, as enemies of the state.

Illegal Haitians due to their large numbers particularly are a huge burden on our country and a serious threat to national security.

Now that the PLP stupidity is out of the way, we need to seriously strengthen and enforce laws dealing with illegals, putting major impediments in place because these people obviously have absolutely no fear of repeatedly coming here illegally, and those assisting them likewise do so with impunity. Why would they stop??

Enough pussyfooting around with this issue. Heavily fine and jail anyone caught employing illegals, strip belongers, work permit holders, nationalized individuals etc' of status and deport those facilitating this activity, consistently raid and roundup (YES, ROUND UP!) illegals and return them by ship, which is the most economical and convenient method we can afford.

They are negatively impacting our country and people more than any other single cause, as we sit back "talking" about being humain, being our brothers keepers and using politically correct language, while these people coulldn't care less about wheather Bahmians lived or died or the Bahamas succeded or failed!!