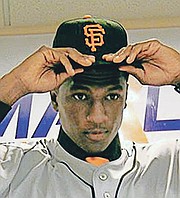 LUCIUS Fox has had a standout season thus far with the Bowling Green Hot Rods in Single-A and was rewarded with an opportunity to participate in Major League Baseball’s All-Star weekend festivities.

Fox was selected to represent the World team in the 2017 SiriusXM All-Star Futures Game, to be hosted at Marlins Park in Miami, Florida at 4pm on July 9.

MLB Network will televise the 19th edition of the contest while MLB.com will also have a live stream available.

Since 1999, the Futures Game has served as a showcase for the top minor league prospects during the league’s midseason classic, framed in a “USA” vs “The World” format.

Fox is currently ranked as the No.14 prospect in the Rays organisation.

Through 64 games thus far, the 19-year-old shortstop is hitting a career-best .285 and ranks third in the Midwest League with 22 stolen bases. He also ranks second on the team with 36 runs scored, collected 23 RBI and sports an impressive .360 OBP and a .712 OPS.

Fox has increased his productivity since the calendar flipped to May and over the course of the last two months has hit .300 with two home runs and 10 stolen bases in 21 games.

He began the season 1-14 at the plate with nine strikeouts through four games. He responded by recording hits in five of the next six games. He also recorded three multiple-hit games during a six-game hitting streak in late April and in May, has posted “three-hit” games in three of his next four outings. During a six game hit streak, he hit his first home run of the season on May 13.

Fox is competing in Single A ball for the second consecutive season in the Midwest League’s Eastern Division. The 19-year-old shortstop made his much-anticipated pro debut last season for the Giants with the Augusta GreenJackets of the South Atlantic Class A League. In 75 games, Fox hit .207 with 46 runs scored, 25 stolen bases, slugging .277, an on-base percentage of .305, an OPS of .582, two home runs, four triples and six doubles.

Fox was traded to the Rays along with Matt Duffy and Michael Santos in the deal which sent left-handed pitcher Matt Moore to the San Francisco Giants. He was limited to just a single game in the Instructional League with the Rays before he was sidelined with a foot injury.

The Class-A leagues, the South Atlantic and Midwest, feature a cross section of players moving up from the Short Season and Rookie leagues, as well as the occasional experienced first-year player.

The World Team roster will be managed by former Marlins World Series hero Edgar Renteria. The world team features 12 of MLBPipeline.com’s Top 100 prospects on the squad. A dozen countries and territories outside the United States will be represented.

The Futures Game was conceived by Jimmie Lee Solomon, an executive vice president of baseball operations for the MLB, looking for an event to showcase the minor league and round out the All-Star week festivities. Early versions of the game created marginal interest in the baseball community, but the event has drawn significance each successive year.

The game’s most valuable player is presented with the Larry Doby Award. Five of the 18 award winners have gone on to become MLB All-Stars.