Fnm ‘Must Be Humble’ To Win Re-Election 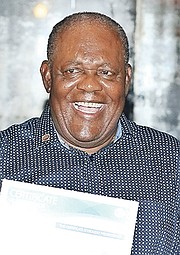 TO succeed in the next general election, the new Free National Movement government must embrace humility and not become giddy with its recent landslide win, former Prime Minister Hubert Ingraham said yesterday.

The former FNM leader also warned that the Minnis administration should not try and find jobs for every member of Parliament who got elected.

“The people will get tired of that too,” he said.

Bahamians have spent much of the last 25 years voting against governing parties rather than in support of opposition parties, Mr Ingraham said.

“Twenty years ago, the FNM won about 55 per cent of the vote. The PLP were left with five seats thereabout in the House (of Assembly) and by the following election the FNM was wiped out, the PLP came back in,” he said, in response to questions during an appearance at a Rotary Club of Southeast Nassau meeting.

“The FNM won this time by a huge majority. Political parties, when they win elections, especially with huge margins, tend to get giddy, it goes to their head. They are unable to satisfy the aspirations of many of their members where everybody wants to be a big shot, everybody thinks he won the election because of himself and the truth is they didn’t win because of themselves. They won because of the party and because the government got voted out, not because the individual was such a good candidate that people say, ‘I love him I’ll vote for him.’”

Mr Ingraham said large majorities are more of a burden than a blessing.

“It is difficult to manage huge majorities and if political parties had a choice to make they wouldn’t want a huge majority,” he said. “I think one of the contributing factors to the FNM’s loss in 2002 was it had won a huge majority in 1997. It ended that with arguments as to who will become the next prime minister; it wasn’t a question about whether you (are going to) lose the next election . . . so (there was) a big fight over (leadership) and fights over other things and by that time the public said, ‘well, the hell with all of y’all.’

Mr Ingraham referred an article published in The Nassau Guardian on Wednesday, which noted more than half of those who voted for the FNM on May 10 did so not because of the party’s message, but because voters were fed up with the Progressive Liberal Party (PLP).

The information came from a poll produced by the firm Public Domain.

“Populations after they’ve voted are sometimes very happy with what they decided and sometimes they have remorse immediately. I think the fact that I’m accepted by the society a lot means they had a lot of remorse for firing me.”

Preaching about something he knows nothing about? Humility? What, slow news day?

Comrades! Not give the middle finger to the former three terms red shirts PM but I'm sure you understand why it does not make sense have a pretend conversion when you knows he done knows what the people are thinking about the former PM’s ‘Must Be Humble’ credo, don't you? Learn to be sincere { likes our Papa Hubert } even if you have to fake it by showing up at a Rotary luncheon wearing ya former law partner's colourful shirt. Papa Hubert's next Headliner circuit appearance - Jokers Comedy Club, Atlantis, Paradise Island.

Ingraham is the perfect person to give his fishing buddy (Minnis) advice ....... Hubbigitty

Well listen who talking. When the people was crying crocodile tears to Hubert Ingraham when he allowed Jose Cartolones to dig up and block up so many of the roads in New Providence all at once and for such long periods. This action singularly put more companies out of business than probably any other event in the history of the country. And just before the 2012 election when BEC was despite power going off so often, they were going around disconnecting consumers every two weeks. And they were telling consumers that Hubert Ingraham brought the consultants in and it was his consultants that advised BEC to disconnect every two weeks. And then there are still some people in the country that the citizenry expect to be treated with respect and honor. And when you get up in a public forum and make disparaging remarks or threats against those persons, then that will cause you to lose elections.

What an undisciplined idiot! This ugly oaf just doesn't know that we all know just how bad he himself is.

i hope Gibson from LI reads this.. i think he believes he won his seat on his own.. If you are FNM you win LI.. simple Mr. Gibson. so sit small, watch and learn and all the others thinking the same way...

You are misinterpreting this point ......... Ingraham spoke truth to power and it cost him his PLP post .......... Gibson was merely doing the same and Minnis respects that ........ and Long Islanders are very savvy, discerning voters ........ Rewind and come again

Nice spin on it but this is what I read... "everybody thinks he won the election because of himself and the truth is they didn’t win because of themselves. They won because of the party and because the government got voted out, not because the individual was such a good candidate that people say, ‘I love him I’ll vote for him.’”. It's not a big deal, just my opinion which along with $5 gets a coffee at Starbucks...

As soon as Mr. Ingraham saw Mr. Christie's shirt . He had to have one, he follows the great one. The cuff may not be as colorful, SMILE. smile.

The FNM has to show some backbone and firmness and resolve to get this country back on track again, at least financially. The message has to be resounding that when you do wrong, especially when it comes to mishandling, stealing or abusing government's funds/taxpayers' money, the hammer will fall hard on you and the chips will fall where they may. But the power of this blow was deflated when the attorney general announced, somewhat prematurely, that there would be no prosecution of elected officials and their cronies who abused, misused or t'ief the people's money. So no except for shame, and only a lil bit of that, they have nothing to fear.

Wow, never thought I'd see the day when the words "Hubert Ingraham" and "humility" would ever be used in the same sentence. I mean they both begin with "h", but that's about where the similarities end.

People don't like Bradley Roberts but every word he said was true. The FNM came in giddy on their win with no plan. Fred Mitchell another hated man said Minnis was on a fool's errand with the disclosure letters...well the deadline came and went, nothing happened and CB said, there's no real deadline. Now Ingraham speaks, I wonder when the FNM will find it in themselves to start listening in spite of the body delivering the message....

Sounds like the reason y'all lost in 2002 was the same reason fb was now your only go to, you.

Only because it was a early change in the era do you get a pass for have a successor after two terms.

We're quite associated with conventions now thank you very much.

Mr. Ingraham, to set the record straight, the fact that you are accepted by the society a lot has absolutely nothing to do with people having remorse for firing you.

We fired you because of your gross stupidity, proven ineptitude as with BTC and obvious lack of concern of Bahamians in favor of foreign nationals!

Bahamians are simply a very forgiving and peaceful people that would rather pick up the pieces and carry on enjoying life as best they can instead of returning evil for evil.

This easy going spirit was always interpreted by politicians as Bahamians being a stupid, short-sighted, forgetful people which caused leaders to think they could get away with any number of egregious acts brought upon the people and country even though the electorate proved otherwise over several election cycles by consistently voting them out.

Only now after the largest landslide election defeat in recent memory have politicians been forced to realize that Bahamians are no fools and not to be taken lightly!

PM Dr. Minnis is on the absolute correct track to date by firstly "cleaning house before building, painting, furnishing, and landscaping"

His stated no-nonsense approach to zero tolerance with corruption is undeniably essential if we are to reposition the Bahamas as a safe jurisdiction for FDI. Nothing less will suffice in correcting global perception that the Bahamas is a politically pirate infested, inhospitable country, and what happened to Sarkis was a glowing example to the world of what happens to anybody foolish enough to trust former administrations!

The main point everyone keeps missing regarding FDI is unlimited potential investors are already here! Sarkis is but a single individual of many residing in our country with the financial clout to make similar major investments. We must convince these people by our actions that the Bahamas is now a safe investment jurisdiction.

The lesson that has to be learned from this election, and a lesson that sadly was not understood by Mr. Ingraham during his two terms as P.M. is that the structural corruption in Bahamian governance must be put to an end.The only way to do that is to prosecute the senior politicians who have been raping the country's treasury for many, many years. Mr. Ingraham is an honest man, but he did not have the stomach to put his former pals, with whom he fought for one man, one vote, into goal. He simply could not come to grips with taking on that nasty job. If Mr. Minnis ducks as Mr. Ingraham did, the Bahamas will simply keep slipping into the abyss of fiscal chaos and ruin. You cannot stop petty corruption at the "meet the public" bureaucratic level, if the higher ups remain free to steal millions. This task has nothing to do with political revenge. It is the only way to put the Bahamas on a path to true freedom, democracy and prosperity. Mr. Ingraham still fails to understand that.

It certainly seems Ingraham sees an obvious chink in the armour of Minnis and is seizing the opportunity to capitalize on it. Unlike Minnis, Ingraham is very comfortable speaking before many different types of audiences and before the press. I can just see Brent Symonette and Carl Bethel being gleeful that Minnis very much prefers to hide himself from the public. Things are gonna get real interesting by end of year if Minnis fails to make good on his promise to hold those guilty of crimes through the abuse of their public office and the public trust accountable and responsible for their dastardly deeds.

as a member of rotary for over 25 years, I was sickened when one of the Nassau clubs awarded the then prime minister Christie with a paul harris fellowship. this is awarded to those who have given exceptional service of some kind Christie only gave to his family, then his friends, and then his supporters. his role as the worst prime minister in the commonwealth's history was not service but a well paid job with lots of perks and a bloated pension at the end, it was nom t service. so we now have a senior rotarian sitting in the corner office at NIB. I can not but help wondering if there is a connection but I hope not. On the other hand the addition of the right honourable Hubert Ingraham as an honoury member of the South East Rotary club is to be applauded.