'Enact Laws To Save Bimini's Environment' 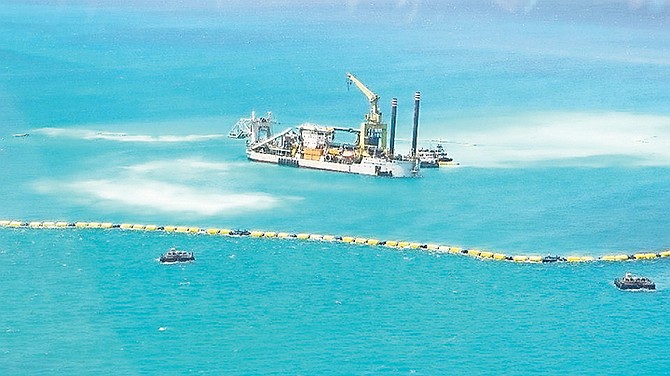 A photo provided by the Bimini Blue Coalition showing the silt spreading from the dredger off Bimini during operations there in 2014.

TWO prominent environmental activists were yesterday up in arms over plans for the further expansion of a key development in Bimini, as they called for the Minnis administration to enact legislation to legally protect that island's marine habitats.

Fred Smith, director of Save The Bays (STB), and Sam Duncombe, founder of reEarth, both stressed the importance of marine protected areas amidst concerns that Resorts World Bimini (RWB) is allegedly seeking to add a water park and golf course at the expense of the island's mangroves.

Mr Smith, when contacted by The Tribune, criticised successive administrations for not enacting legislation that would allow for the legal preservation of marine protected areas (MPAs), particularly in Bimini.

Mr Smith, QC, also railed against the "abomination" that is "unregulated developments" in the Bimini islands, calling such foreign direct investments "parasites" that merely end up amounting to a "rape of the environment and local rights".

This, Mr Smith charged, is all the more reason why the implementation of the Freedom of Information Act (FOIA) is crucial, as he called for the Minnis administration to "tell the people what the true position is when it comes to north Bimini".

Mr Smith's statements came as frustrated residents in Bimini reportedly plan to hold a march and flotilla protest on Friday against present and future major developments that threaten the sanctity of that island's mangroves and marine habitats.

However, the main target of their frustration appears to be RAV Bahamas/OPAC and its partner the Genting Group, which have invested heavily in the island, mainly though RWB.

Residents in Bimini have demanded clarification on how much Crown land former Bimini Bay developer Gerardo Capo has received and what would be the legal implications for his development of land on the North Bimini Marine Reserve and the East Wells area if a marine protected area (MPA) is approved.

They also want environmental impact studies and reports related to the project to be made public.

When contacted yesterday on the issue, Mr Smith submitted that Bimini's issues with foreign direct investments is a prime example of "central government treating the Family Islands as if they are colonies of Nassau" without "any regard for the local residents".

Bimini, he said, is thus "the supreme example of how a development should not happen in The Bahamas".

"You have a casino there, none of the taxes go to the Bimini district council," he added. "We don't know all of the tax exemptions, but doubtless they have VAT exemptions or stamp duty exemptions, customs duty exemptions, business license exemptions. This is the problem. The people of The Bahamas don't get a preview of the secret deals that are created in the Office of the Prime Minister.

"And the developments don't form part of the organic growth of a community like Bimini. It is like a parasite on the environment. It's a gated community, private roads. Bimini looks like a ghetto, there's been unfortunately no infrastructure improvement, they haven't dealt with waste management, water, power.

"This model of development is the worst possible for The Bahamas. So I am very supportive of the residents now expressing their dissent and their criticism of whichever government is in power for failing to protect the environment."

Mr Smith also criticised the "lip service" paid by successive governments to the legal preservation of marine protected areas throughout The Bahamas, further bemoaning the uncertainty surrounding "what government agency is or isn't conducting any monitoring of the dredging or construction" associated with major developments.

"For instance, we don't have an Environment Protection Act (EPA), the BEST Commission doesn't exist in law, there's no environmental protection agency that has any regulatory teeth, nobody is monitoring what is or isn't happening in north Bimini," he said. "And what has happened--I visited there recently, it is nothing less of a rape of the environment and local rights.

"Bimini, north and south is a unique environment, and to ruin it just so that a suburb of Miami can be developed there…If you go up the western shore there has been horrendous erosion. In fact, there's hardly any beaches left where they once were, they've had to build all these horizontal walls, and the paradise they came to exploit is ironically fast disappearing.

He added: "Both the FNM and the PLP have for decades been promising to create all of these marine protected areas. And we thought that (former Environment Minister Kenred Dorsett) had enacted legislation to preserve the north Bimini marine protected area. But it seems that that was not the case, and we don't know what the position is."

Meanwhile, Ms Duncombe called on the government to "do a better job of actually protecting what is ours" and for it to "steer developments the way we want them done, not the way they want them done".

She added: "We're not anti-development, we just want that when developments take place they are not severely impacting any kind of marine life, and essentially when you rip out mangroves you are diminishing entire areas (for) new (species) of fish."

Need to put pressure on the Hilton Corporation. They are a licensee, not the developer, but the bad press of supporting the environmental disaster from this development would likely make them withdraw from continuing to license the hotel. Losing that signature name would shine a bad light on the overall development and hopefully put a stop to any further destruction.