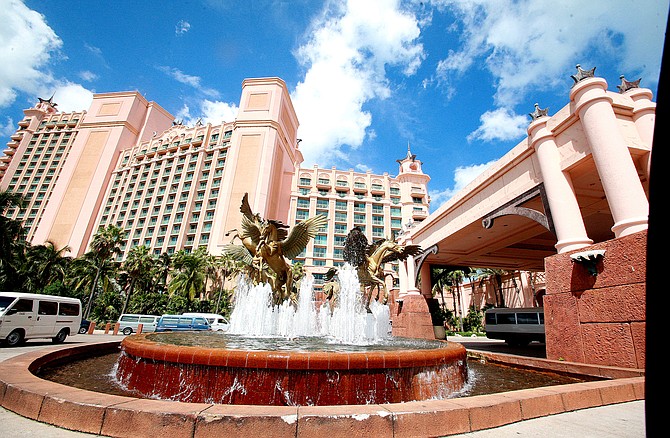 Atlantis's top executive yesterday admitted he fears 'market cannibalisation' as a result of Baha Mar's opening, warning that pricing "into the Christmas season" has already been impacted.

Howard Karawan, the Paradise Island resort's president and managing director, told Tribune Business that he predicted pricing by "new developments" would suck business away from Atlantis and other existing properties.

Speaking after he led Prime Minister Dr Hubert Minnis and Cabinet ministers on a tour of the property, Mr Karawan said there needs to be a "big push" to grow the Bahamas' tourism market. Yet he warned that success "does not happen overnight".

"When we developed the first phase, the second and third phase, we spent years growing the market," he said in reference to Atlantis. "It doesn't happen overnight. Would I like to see new developments doing more? Yes, I would.

"I do fear that there is going to be cannabilisation. I see it in pricing; not just now but even into the Christmas season. I see pricing of new developments taking away business from existing properties, not only here."

Acknowledging the concerns as to whether Baha Mar and Atlantis can co-exist, Mr Karawan told Tribune Business: "I sit as chairman of the Promotion Board. I think there needs to be a big push to grow the market, and if Baha Mar does what they said they were going to do, bringing in the Asian market and expanding to new areas, I think that is fine.

"If they do so by creating integrity in their pricing, then I think we will be OK, but 20 per cent discounts to our pricing.... that is not going to bode well for the Bahamas."

Fears that Baha Mar may split, rather than grow, the market for high-end visitors with Atlantis have been present ever since the $4.2 billion Cable Beach development was conceived in 2003-2005. Paul O'Neill, Atlantis's former top executive, publicly voiced such concerns during that period at a Bahamas Chamber of Commerce luncheon.

Should these fears come to pass, it would create downward pressure on room rates at both New Providence's mega resorts and, potentially other hotel properties, with none generating the profits they need to keep Bahamians employed and maintain a sustainable business model.

Dionisio D'Aguilar, the minister of tourism, told Tribune Business earlier this year that his priority was to avoid any "devastating cannibalisation" impact from Baha Mar's full opening on other New Providence resorts.

He said this was a greater concern than generating the extra 314,000 airline seats per annum that are needed to fill Baha Mar's net 2,300-room increase.

"I don't want them [Baha Mar] to increase occupancies at the expense of another property's deteriorating occupancy. It's very important that the marketing programme increase overall visitors to the country. We don't want the same number to be here and going to different properties. That doesn't help the country," Mr D'Aguilar said.

"I'm very mindful that a co-operative marketing programme is put in place to help the occupancies at Baha Mar and all other hotels. There will be some cannibalisation, but it can't be totally devastating."

"We don't want one property to benefit at the expense of another. We are putting programmes in place to ensure that does not happen. We want to make sure everyone has the particular segment of the market they are targeting, and they attract new, additional visitors to the destination to ensure the country as a whole benefits."

It is ludicrous to believe that Bahamar can fill it's rooms with new business that simply does not exist. The stories about flying Chinese visitors here are just that, stories. What Bahamar has to offer is a casino, golf course, and a mediocre beach. Macau, which is on the way here, is a gambling mecca, that has all of the amenities Bahamar has to offer, and more, without having to travel around the world. Of course they will pull from Atlantis and other resorts customer base, with the result being to the detriment of the country, and to Atlantis, who have proven their commitment to the Bahamas. This is a slippery slope, and we are all going to experience the slide very soon. The penultimate outcome for the hotel industry, and our country, will be destructive. Government must ensure that everyone is playing on a level field, or all of these promised jobs will be offset by other resorts downsizing. It is also time to bring our prices in line with the rest of the Caribbean and Central and South America, as these countries are a more reasonable alternative to our overpriced product.

I think the problem is our biggest source of income, which is or supposed to be tourism. That basically says we stay dependent on other people from other countries. If we put that same focus what we have on tourism on establishing ourselves independently then we could work interdependently but as it stands, other peoples money in our pockets condition us to be and stay dependent.

Atlantis is trying to open the door to discussions on receiving additional concessions from the Bahamian people as a result of the outrageous concessions granted by the previous corrupt Christie-led government to the Red Chinese enterprises now behind the Baha Mar development. The only problem is, we, the people, are in dire financial straights and have absolutely nothing more to give. It is patently wrong for Atlantis to seek additional concessions when it knows full well that our country is in a most perilous financial predicament. Minnis and his government must be firm in the message they send to Atlantis's management team and owners. Contrary to Atlantis's assertion, more concessions for them will not translate to more revenues for the Bahamas government and the Bahamian people. We are at the point now where more concessions to these constantly begging developments (Atlantis and Baha Mar) will only do one thing - put money in their pockets and increase our national debt!

At first Atlantis will lose some business but then the PLP STINK that is all over Bahmar will finally get so bad that no one not tourists nor employees will want anything to do with the dump and in 30 years will have some other rich foreigner in here with his hands down the PM's shorts doing watever the fruck he likes.....trying to bulldoze the old crap and build new crap even bigger and brighter - the never ending cycle of 3rd world so called tropical paradises.....Sucks for Atlantis now because the only way anyone can compete is to lower the price which is tough to recover

Europeans do not like the big high-rise hotels .......... More airlift from North America is needed ...... South America and Asian markets are a small percentage ........ Atlantis and Bahamar need to invest in four 777s each and bring in their guests themselves