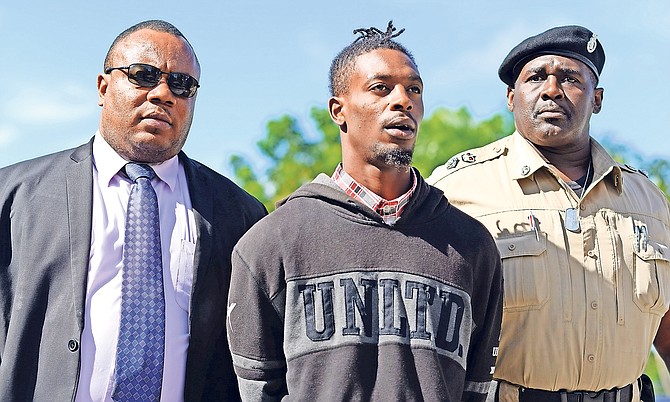 A MAN must wait an additional seven weeks before he is sentenced for the fatal stabbing of a banker he claimed had made a sexual pass at him.

Lamar Albury, 26, was due before Senior Justice Vera Watkins for the penalty phase of his trial yesterday concerning the December 2015 manslaughter of Devince Smith.

However, the probation and psychiatric reports concerning Albury's social background, which had been requested by his trial lawyer, are still outstanding.

Albury is expected to reappear in Supreme Court on August 9 at 1pm.

He had denied the murder charge against him during his trial, which began on February 20 and concluded on March 8.

Smith was a sports coach and was employed at Pictet Bank & Trust Ltd. He was also a former president of the New Providence Volleyball Association.

On the first day of trial, the jury heard that Albury allegedly had confessed to his relatives that he had fatally stabbed the banker, who had hired him to do a paint job at his apartment for an upcoming holiday gathering, when the victim had made a sexual advance to him.

The second day of trial, Smith's housekeeper testified that in the three months she had known Albury, the accused had been to Smith's apartment on three occasions and on two other occasions, the accused and Smith were seen in the victim's Jeep drinking.

The prosecution's final witness was forensic pathologist Dr Caryn Sands, who testified that the wounds, which included a slit throat, were unlikely to have been caused by a painting knife as Albury had told police when interviewed in custody 14 days after the incident.

At the close of the prosecution's case, Albury was asked by Senior Justice Watkins to indicate whether he would remain silent at his trial or elect to give testimony under oath.

Albury elected to take the stand and spoke of how his accepting a "compliments to the season" Hennessey drink from Smith when he arrived at the apartment before he started the job, spiralled into a scuffle and stabbing after the banker allegedly made a sexual advance at him.

When cross-examined, it was suggested to Albury that in his voluntary record of interview in police custody, he made no claim that Smith made a pass at him.

Albury said it was shameful to speak about the alleged action, so he withheld the information. The convict also denied that Smith was running away from him. However, he conceded that Smith had no weapon.

Albury was asked why the chairs in the living room were overturned if the scuffle had occurred upstairs and Smith had collapsed at the foot of the stairs.

The accused said when he left Smith there, he could not say that he was still alive and that Smith might have overturned the chairs.

Albury conceded that he turned himself in with a lawyer 14 days after the incident. However, he claimed that he told his relatives what happened the day after and not December 29/30 as the jury heard.

Albury also conceded that he burned the clothes he wore on that day.

The convict, who was remanded to the Department of Correctional Services until his next Supreme Court appearance, could face as many as 35 years in prison.

He is represented by Michael Hanna while Cordell Frazier appears for the Crown.