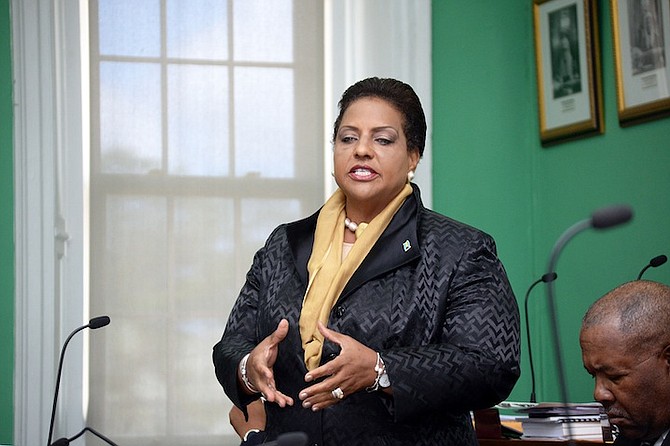 OFFICIAL Opposition Leader Loretta Butler-Turner said yesterday that more “credible” Free National Movement candidates like Brent Symonette are propping up the “weak” and “indecisive” leadership of Dr Hubert Minnis in an effort to make the party appear to be a better option than the Progressive Liberal Party.

She also told The Tribune that Mr Symonette, the country’s former deputy prime minister, faces a “huge uphill battle” when trying to improve the performance of the FNM’s leadership team.

Her comments came a day after Mr Symonette revealed that he is seeking the FNM’s nomination to run in the St Anne’s constituency in the upcoming general election. Mr Symonette represented the area from 2007-2012.

“I didn’t hear Mr Symonette’s statement (about returning to frontline politics as a candidate for the FNM) and I’m probably speaking from a position of not being fully knowledgeable about his acceptance of the position, but I do believe that given the many opportunities myself and people like Mr Symonette have had in trying to bring the party and the leadership to where it needs to be, I think he has a huge uphill battle ahead of him,” Mrs Butler-Turner told The Tribune.

“While I find it interesting that he has determined to become a part of the FNM’s candidates, I’m not totally surprised given the fact that I believe at this juncture the FNM finds itself in a very difficult position and all that appears to be happening is that (the) weak and indecisive leadership of Hubert Minnis is perhaps being substantiated by more credible candidates in order for them to be a viable option in the upcoming election. I think there are a lot of internal problems in the party and Mr Symonette has been trying to resolve that. It’s my opinion that maybe he needs to try and join and become a part of the internal strife the FNM is going through.

“I imagine a person of his stature who held the high office of deputy prime minister probably feels that he can help to elevate the profile of FNM by joining again.

“The difference between Mr Symonette and others who are considered high profile is he has parliamentary experience, a lot more than Minnis and others. On paper people may have a good resumé but people could be extraordinary in private life but that doesn’t always translate to a high level of competence once in public service,” Mrs Butler-Turner told The Tribune.

In the last year, Mr Symonette has at times been critical of Dr Minnis’ performance as party leader.

He endorsed Mrs Butler-Turner for leader ahead of the party’s convention last year. He did not, however, publicly support the decision of her and six others to oust Dr Minnis as leader of the Official Opposition last December.

Shortly after the actions of the “rebel seven” FNM MPs, the FNM rescinded Mrs Butler-Turner’s nomination for the Long Island constituency.

She has said she plans to run in the area as an independent candidate.

Last week, the Long Island MP forecast that it was “very likely” the PLP will be returned as the government unless splintered opposition forces can put the future of the country before their own egos.

Mrs Butler-Turner told reporters outside Parliament that the path to achieving a unified opposition is “very straightforward” but was blocked largely by the leadership desires of all persons involved.

She maintained that, despite the protestations of other groupings, the only team that she has not had formal talks with was the FNM.

Sit small LBT -- oh sorry, I forgot, that is impossible for you.

Symonette "credible"! Is LBT kidding? Or do we now know for sure that she has piss-poor judgement!!

If Hubert Alexander Ingraham did not implement his stop, review and cancel policy to the extent to which, Perry Christie and the PLP would never had a chance of beating the FNM and returning to government. But when a still bitter Ingraham returned as PM, his first actions to stop, review and cancel brought the already weak economy to a standstill. By the time they got things fully moving again it was time for elections and The PLP won hands down. Christie, learning from Ingraham's mistake, came to office and not only continued and completed projects (road works, hospital extension etc.,) that he met going on, but he also carried out plans and projects he met on the drawing board (refitting the defense force and Bahamasair with new craft). Christie also claims that the VAT would have been implemented even if the FNM had won a second term and that PM Ingraham shunned away from making a decision on the licensing and regulation of Web Shops, which the PLP did. But the two most prominent planks in the PLP's platform crime, especially murder and unemployment are the most two dismal failures. Obviously the PM's interference in Bah Mar caused not only a delay in anticipated jobs, but it caused a displacement of many highly skilled and trained workers when Bah Mar, despite its preparation, failed to open. Loretta Butler-Turner seems to have some of the Ingraham bitterness and unforgiving spirit in her. On the one hand she criticizes Hubert Minnis for being weak and indecisive. She claims the FNM has a lot of internal issues that need to be fixed. Yet when Minnis appoints high profile, experienced and powerful candidates to his team to help make things right and to strengthen the party, she still criticizes him. She is presently on the outside of the party looking in, and possibly a seatless wonder come the next election, all because of actions of her own. Actions she took to attempt to undermine and remove Minnis. Because there was no forward planning the plan blew up in her face and caused her and her six (temporary) blind mice to hit a brick wall. Despite this and despite the fact that some of her blind mice has regained their vision and are willing to go back home to the FNM, Loretta still has a long dagger drawn and seems to be using every opportunity to plunge into the back of Hubert Minnis. How sad!

Your faith in the Dimwitted Doc is gravely misplaced. I sincerely hope you never get to find out why....if only for the well being of most decent honest hardworking Bahamians.

You have nothing good or positive to say about anything or anyone in this country.

You're relying on hope and prayer that things can still be changed for the better. In doing so you are ignoring the reality of the situation we find ourselves in today. As a country and society, we are now well beyond the point of no return. All you have to do to fully appreciate this fact is take a good hard look all around you. Just about every institution in our country has crumbled or is in the final stages of decay due to the unrestrained fraud and corruption that now permeates every facet of our society. To ignore reality is irresponsible. Believe me, I'm not the enemy nor am I a doctor gloom who sees only doom. I'm just a well travelled historian and student of political science (perhaps more a culturalist) who is old enough to understand where our country is most assuredly headed. History is littered with many other nations that have followed very much the same downward path to failed statehood. It's a downward path that typically starts very shortly after achieving majority rule and independence. Frankly it's surprising the institutions the British left us with lasted as long as they did given the extent and weight of the fraud and corruption inflicted on our society by the Pindling, Ingraham and Christie regimes.

I think your assessment is off by a LOOOOONG shot.

Are you forgetting the global economic recession which hit us from late 2007? Our tourism industry was already in a slow and steady decline... our economy then began contraction in 2009.

To blame that on Ingraham is false. While I am NOT an HAI fan or supporter, lay blame where it belongs.

Ingraham will admit that the stop, review and cancel policy was not the right thing to do, especially in a time of economic downturn. It's not a matter of placing blame but merely to show how much more can be accomplished when government changes and programs and plans met in place are continued or discontinued based on their merits and not the fact they were plans from the side opposite. For example even though Donald Trump and his administration repeatedly admits that they have no plan that will replace Obamacare, he has already signed an executive order to dismantle the plan, possibly leaving millions without health insurance.

Comrades! The PM was approached to find a House seat constituency suitable to accommodate the unreliability antics compatible to Loretta's, for her to contest once he rungs the 2017 General's bell.

Loretta is acting like a kid locked out of the candy store with her nose up against the window!

OUT OF LORETTA MINNIS AND PERRY, MINNIS IS THE ONLY ONE WITH SENSE. THE OTHER TWO SEEMS TO HAVE GONE INSANE ALONG WITH BRAN

LBT is irrelevant, who cares?

Regardless 3 years, 2 months ago

Well it is said that God appoints governments and he dismantles them. With the on goings and the goings on in the past several days, weeks months even, it appears that some divine ipower is intervening in the government of the Bahamas and directing the upcoming election. It is further said that peoples do not get governments they vote for but governments they deserve.

Ex-senator McCartny seem to show the most instability that the whole bunch. . .he continue to deny all negotiation with anybody. . .however, they all are coming and saying they are or were in talks with him!! That party has huge task to rectify with the public. . .especially the young public. . . how come their leader can't admit to being in any negotiations with anybody. . ..and each denial turns out to be true!! This may very well be red flag area. . .he can't see himself to need help from anyone. . .he will lie to hide that we do need help at times. . .the perfect man complex! Now he is chewing LBT tail off in public to make us think that he is clean and she is the dolt. . .all over the place causeing trouble!

What an incredibly naive statement for a potential leader to make. This statement underscores LBT's total unfamiliarity with sound leadership principles. Assembling a credible team is the hallmark of good leadership unlike the unfit misfits she appointed to the senate. This lady is absolutely clueless, all sound and fury signifying absolutely nothing. A true empty barrel making silly noise.

Too bad he won't offer himself.

Minnis is no leader.

LBT has proven she is not a leader.

Perry is not a leader.

Bran is but he leads a gang of inexperienced children and he is way too egotistical...

Can someone please give me a reason to go register....

Just to help rid the country of the pestilence that is the PLP. You need no other reason.