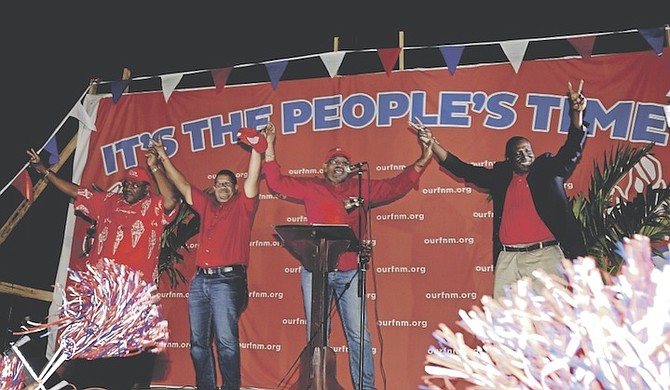 THE Free National Movement introduced its North Eleuthera candidate Howard “Ricky” Mackey to the island during a rally last night.

Speaking to supporters, FNM Leader Dr Hubert Minnis promised upgrades for the island, including a new school in Gregory Town, as well as repairs to roads and police stations in Eleuthera.

“We are going to build a major administrative complex for Eleuthera, so residents in this area can access basic government services, like passports, without having to travel to Nassau.

“We are going to more purposefully and seriously address the poaching of your waters than the PLP. This is a matter of national security and food security. We can’t have people stealing our lobster, stone crab claws and fish,” he said.

Dr Minnis also chided the Progressive Liberal Party for racking up the national debt to nearly $1.8b while also accumulating around $1b in value added tax.

“They have also collected other money in government revenue,” he said. “But for all of these billions of dollars they have nothing to show. The PLP did not deliver comprehensive National Health Insurance as they promised. The PLP built no new schools.

Dr Minnis also touted his party as being the organisation of “change” while saying most of the PLP’s election candidates are part of “the same old tired crew.”

“Of the 16 candidates the PLP ratified recently, 11 of them are the same people who served in what has been the worst government since we achieved independence,” Dr Minnis said.

“These are the same people who wrecked our economy and wrecked the country in the past five years.

“If you want change and a new direction for the country you have to fire them and hire the FNM. This is a contest between the PLP and the FNM. A vote for the DNA is a vote for the PLP.

“If you go to bed with the DNA you will wake up with Christie and the PLP.”

The FNM has also ratified Hank Johnson for the constituency of Central and South Eleuthera, and earlier this week held a candidate launch for Carlton Bowleg, who will run in the North Andros and the Berry Islands constituency.

Time for someone to remove the (Pindling) PLP curse off Eleuthera. Generations are dying out and never gotten to see the island return to the prosperity is once knew before the PLP, including Perry Christie as Minister of Agriculture ruined the economy. And he never kept any of the promises he made to the people of South Eleuthera either. Remember Hatchet Bay use to provide chicken and eggs and fresh milk and ice cream for the entire country. And the beef from the cattle farms? And the farms down south and the canning factories that exported their goods? Eleuthera was the first Family Island (Out Island) that had regular jet service and was the play ground for the rich and famous jet set. The PLP packed them up and shipped them out and gave others deadlines to leave the country. Some wowed never to return to the Bahamas. But Nygard and Bacon continue to make headlines.

It is happening again. Although not rich and famous like the earlier generation, longtime expat homeowners on Eleuthera are putting their property on the market and fleeing in droves. They are tired of paying all the freight to support the island, being bled dry and treated like dirt.

Easy to promise all these things but the reality is that the next government will have to do some drastic spending cuts just to keep this country afloat. The problem being that all parties just see 5 year cycles and plan for re election and damn the consequences. The country needs along term game plan if it is to succeed.