Insight: Government Is Making A Pig’S Ear Out Of Treatment Of Animal Deaths

Kim Aranha questions why an immediate recall of contaminated pig feed from the government’s feed mill has not been forthcoming and calls for the release of the report of the investigation into the deaths of Exuma’s swimming pigs . . .

The world’s press have picked up on tourists feeding alcohol to Exuma’s swimming pigs, from Swiss free commuter newspaper Blick Am Abend in its Zurich editon to The Daily Telegraph in Britain and many more. 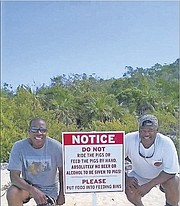 New signs have been erected giving guidance to visitors.

As the reaction to the death of what I believe to be seven pigs (the numbers keep changing) on Big Major Cay - aka Pig Beach - in the Exumas continues to resonate across the globe, I have been contacted or quoted by journalists from some of the most respected or renowned media groups: BBC, CBC, the Daily Mail, The Daily Telegraph, Elle UK, The Independent (UK), The Washington Post, the New York Times, the National Geographic, Il Corriere della Sera (Italy) to name but some, I am trying very hard to get as much or all the information that is out there.

Alas, many people are afraid to talk. Others are very willing to talk but absolutely do not wish to be named because of the fear of becoming the target of victimisation. The latter category has been very vocal and I have greatly appreciated every bit of information. It has brought to light more than one concern to think about.

As reported in The Tribune on Thursday, there was a large batch of pig feed milled at the government entity, the Gladstone Road Agricultural Centre (GRAC), that was tainted: the cause of this, as far as I can find out, is that, allegedly, the corn that was brought in from the United States to enable GRAC to make the pig feed was left on the docks for three weeks in a container in the hot sun, and when the shipment was finally cleared and brought to the facility to be milled, it had already “soured”. However, in their wisdom, they went ahead with the task at hand and made a considerable batch of pig feed. Now this is where it all gets very concerning ... the bags of pig feed were sold to farmers all over the island and, perhaps, to boat operators who were trying to be responsible and were purchasing what they thought would be best for the “swimming pigs”. I say “perhaps” because I doubt we will ever know for certain. Some operators have told me (confidentially, of course) that they had bought feed from GRAC to give the tourists to feed the pigs.

What we do know for sure is many farmers did buy the feed; in many - and in some cases all - their pigs died. I spoke to a couple of farmers, as recently as this weekend, who suffered huge losses following purchasing this feed; they blame the feed and giving it to their livestock. What we do not know, but we hear repeatedly from people very close to GRAC, is that they, too, lost a large quantity of their breeding pigs, so many that they dug a mass grave and buried them rather quickly. This has not been verified, but is certainly the topic of many conversations I have had.

What we do know is there was spoiled feed, pigs died and yet nobody I know of has heard of a single recall or warning from the government. No announcements on the radio, no warnings on TV, nothing in the papers … which leads to the second question, why on earth not?

Surely the very first order of the day would be to warn all the farmers who may still be in possession of this feed?

I ask myself why the Ministry of Agriculture is not scrambling to help these farmers who have lost a huge part of their livelihood. “Bring back the bags, we will reimburse you” should be the order of the day. The responsible thing to do must be to find out who lost pigs, the quantity and then help them get back on their feet by supplying pigs for free. There are families who have lost a considerable part of their income, immeasurable for some. Where is the humanitarian aid here? Even if they don’t care about the pigs, what about the people affected, families losing their livelihoods?

Getting back to the “swimming pigs” and what fate befell them, I suspect we will actually never have the absolute cause. The entire operation has undertaken a nefarious air and the cloak and dagger demeanour with which the “investigation” has been conducted makes one automatically think the very worst. The refusal to give information, to return calls or to even discuss the circumstances gives cause for concern.

I have been contacted - confidentially again, of course - by more than one veterinarian who has unequivocally stated that they do not believe it possible that those pigs died of sand ingestion. I do not think that anybody denies that the pigs had sand in their stomachs, but that would not be unusual and it is an amazing coincidence for them to all die at the same time! I have received Facebook messages from residents in the Exuma Cays who are insulted by the ingested sand report; they feel slighted and cheated and they fear a cover up that the “swimming pigs” got caught in the middle of something by accident and unavoidable circumstances. They want explanations and reports that are not forthcoming.

We know for sure that those pigs have been on Big Major’s Cay for years. Obviously a point of considerable concern is that when the Bahamas Humane Society sent down its Inspector on the Sunday after the discovery on February 17, he found that the natural source of water had all but dried up and the “tubs” of water were inadequate and muddy. I question who has actually been responsible for the water for these animals and how do they transport sufficient daily water for the pigs? I do know that many tour operators bring them fresh water, but that, at best, must be sporadic.

We have been told that there was a necropsy performed but the only information released is that there was sand in the pigs’ stomach, which was not remotely surprising.

How many pigs were examined?

What else was in their stomachs?

Were fecal samples taken from the cay?

Was the water tested?

How thoroughly were the remaining pigs examined?

Were tests conducted on the living pigs at all?

Two weeks have passed and the world continues to ask questions and we all get fobbed off with “sand in the tummy” routine.

I understand that there will now be supervision. There are already signs and, hopefully, the sad situation of the occasional tourists, visitors or Bahamians, undertaking random acts of stupidity like feeding the pigs alcohol will now be curbed. The world press has picked up on these reports and keep asking why tourists are being blamed.

This is rather like a game of “To Tell the Truth”. As a concerned community we need the answers and the truth. Incidentally, for once in a long time, that expression “the eyes of the world are upon us” has never been so accurate as the world press clamours daily for answers.

I call upon those in charge to release the information on the tainted feed and to step up and help those farmers who have been devastated by loss.

The Surrey horse situation continues to weigh on our collective shoulders. I do know that there was a Surrey horse inspection last week and that one horse was removed for a month’s rest period. This horse will be under the supervision and care of a veterinarian during the time it is off the road.

The Surrey horse industry is expensive as horses in the Bahamas are very costly. Our Surrey horses are not fed during the day, though many horse experts will tell you that they should be. However, even not feeding them during the day, the cost of feeding a horse is high: hay costs $35 a bale and each horse should have at least half a bale a day, so the cost of the hay alone is $122.50 a week. When you add in the various grains and vitamin or mineral supplements, the cost of feeding a horse each month amounts to between $600 and $700. Horses, especially those walking on the roads, need to be shod every six weeks and once a year they have to have their teeth floated (shaved down by an expert to enable them to eat properly). The bridles and necessary tack for these animals can run to hundreds of dollars, and these costs are before you concern yourself with the condition and safety of the carriage the horse pulls. A very expensive undertaking all round.

Many people dispute that the Surrey horse could be replaced by Tuk Tuks, popular three-wheeled motorised taxis found in Thailand. This would enable tourists to have a “quaint” form of transportation all over New Providence, with no rest periods and more flexible load limits. The Surrey operators would most certainly make far more money operating Tuk Tuks.

Of course, the drivers would require valid licences issued by the Bahamian government. Now, that is not a requirement and sometimes you have to ask yourself if young Surrey drivers are actually aware of the rules of the road.

We can but hope that the governing bodies responsible for animal welfare in this country sit up and embrace accountability where the pigs and the feed disaster are concerned and address the Surrey horse drivers blatantly ignoring the rules. We can but watch and hope … and continue to report all and any infractions, preferably accompanied by a photograph.

• Kim Aranha is the President of the Bahamas Humane Society. Comments and responses to insight@tribunemedia.net